last minutes and never at alls

I am delighted that the estimable Robert Cheatham has called our attention to the blog of architectural theorist Lebbeus Woods, who has been revisiting highlights of the long-deceased architectural theory of the 1980s. Of particular interest is his post on the Rem Koolhaas design for Paris' legendary Parc de la Villette, a five-layer project that was passed over in favor of Bernard Tschumi's fabled collaboration with Jacques Derrida:
http://lebbeuswoods.wordpress.com/2009/10/24/another-rem/

I have decided it is time to make public my post on the Millennium Gate in Atlanta, which I consider one of the most significant pieces of postmodern creativity of the early twenty-first century, the filling in of the gaps left by history, by the absence of projects that, like Koolhaas's Parc de la Villette, should have been constructed but were not, or were never even imagined in their rightful time.

Whether I do that or not, I am chagrined that I have been unable to write a decent review of an eminently viewable show at the Millennium Gate Museum, major works from the Bank of America's collection of American Impressionism. George Bellows' Old Farmyard, Toodleums alone would be worth the rather hefty price of admission: 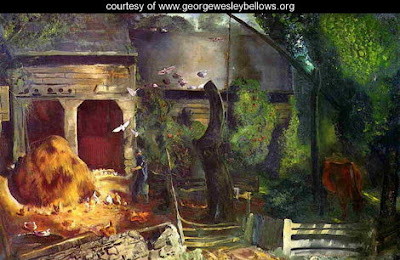 The exhibition closes on December 6. There are more familiar, signature works by the major figures of American Impressionism, but as always I am attracted most strongly to the works by lesser known figures or the works in a style not always associated with the more famous artists.

Thus I make no judgments as to the art historical adequacy of the collection, though it seems that Bank of America has made judicious acquisitions. All I can say is that I'm glad "Transcending Vision" has been here lo these many months, and I offer apologies for not having said so much earlier. I was working on a four-part essay on hybridity, cross-cultural stereotypes, and other topics not immediately thought of when the topic of American Impressionism arises, not to mention the Millennium Gate.

But all that will have to wait, since the show is on the verge of closing. Fragments of the essay in question already exist on this blog, but I am not about to make things easy for the merely curious by cross-referencing them.
Posted by littlejoke at 8:06 AM

I just got kaspersky internet security yesterday and I scaned my computer with a full scan and it found viruses... So I tried to quarantine them but every time i do that it asks me to open a file.. I've never seen that from any antivirus programs.. THere is also another option: " clear all" which deletes report entry.. is that how you delete the infection or is there another way? [url=http://gordoarsnaui.com]santoramaa[/url]