the re-return of the durutti column 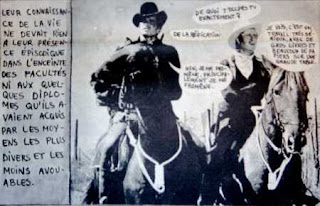 I can't find the American version/translation, which was superimposed on an American comic book image, but I find that the original in "The Return of the Durutti Column" was speech-ballooned onto a movie still. The page from which I take this information is quoted below. Its lack of theoretical and historical comprehension is actually pretty valuable; the author has apparently never read the technical term "reification" so it is interpreted speculatively as any ordinary French-speaking reader would have read it. Buenaventura Durruti (not Durutti) was a Spanish anarchist who organized the Durruti Column as a counterforce against Franco's army early in the Spanish Civil War.

Anyone who knows vintage punk rock is already familiar with this history, of course.

Here is the relevant text from http://www.cerysmaticfactory.info/durutti_le_retour_66.html

A slightly modified version of the image also appeared on the FAC 3.11 poster given away to members of the now defunct "Durutti Database". Most of the copies were water damaged, though pristine copies do exist.
Transcript of the cowboys' conversation