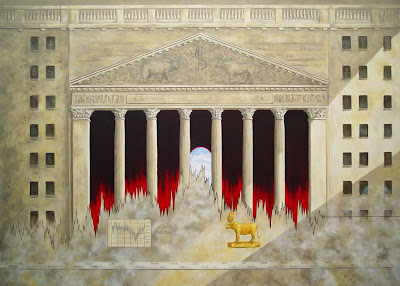 It's interesting that some of the most relevant paintings in Atlanta right now were made by one of the most tradition-aware and stylistically traditional painters, Charles H. Reinike III, the latest of whose tradition-focused "Arches Series" are about to be exhibited at Reinike Gallery (well, actually, as of mid-November, which in times of fast-breaking events is more like half an eternity from now).

Cacophony and Three Temples are unfashionably wedded to blatantly traditional symbolism, and will not be to everyone's taste, but I've always liked Reinike's image of the stock market graph flatlining, as in an EKG of the world of financial exchange. It's the credit markets rather than the stock exchange, which has lately been in free fall reflected in the shape of the charts, but the free fall is related to the flatlining of finance: no one ever expected the world's economic ministers to be performing CPR on a world of interbank credit that has unexpectedly gone into total arrest.

And yet a painter came up with a lovely little visual metaphor for it before it happened. One of the painters least naturally inclined to political activism, at that.

I'm sure the image has occurred to many other people, but Reinike came up with it on his own.

And little surprises like this are why I like to go to all kinds of galleries, from underground to upscale...most of the time they are exactly what you expect, but it is the unexpected encounters and moments of illumination that make one inclined to keep trying to write about art.

That "trying to" is subject matter for a later post. We in Atlanta are in need of some creative re-inventing in the world of art reviewing, of the method of providing information and of connecting audience and artist, as the world is in need of creative re-invention in the domain of global financial markets.
Posted by littlejoke at 8:21 AM