everything is contextual. by definition. 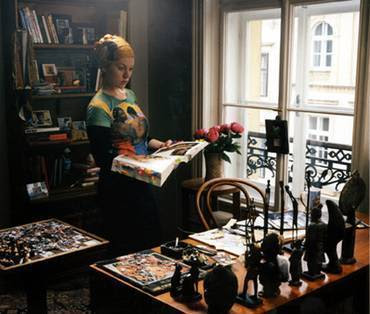 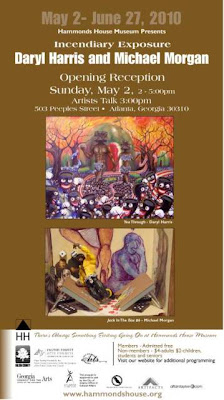 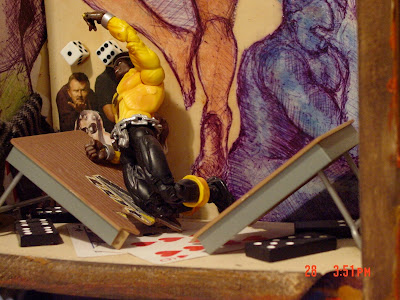 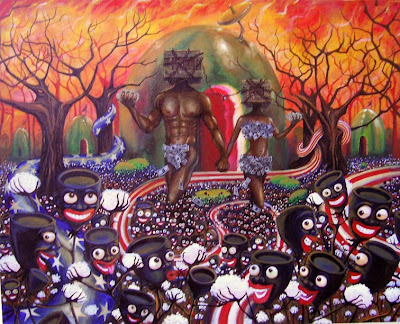 That's to say, we perceive from a perspective, one determined by our prior experience, which includes upbringing, personal encounters, and theoretical apparatus that we buy into, whether that apparatus be Calvinist, libertarian, mystical or Marxist.

And that means that certain exhibitions are just plain troublesome to write about, just as they were troublesome to curate. But whether they in fact create trouble depends on the age and perhaps the nationality of the viewer.

Such is the case with "Incendiary Exposure," the exhibition of work by Daryl Harris and Michael Morgan that runs through June 27 at Hammonds House Museum in Atlanta.

We must suppose they also get the picture in terms of Harris' paintings that deal with the pathology of continuing white racism and the different pathology of the violence-ridden culture that Harris encountered among his students and that he considers a particularly dysfunctional response to diminished economic circumstances. (I'm using this ludicrously highfalutin language for a reason, if only for Brecht's good old "Verfremdungseffekt," q.v. on Wikipedia.)

Sipp suggests that the pathological legacy of Jim Crow lingers in part because the United States has never squarely confronted the topic, but rather attempted to deal with this or that individual aspect of the problem. Distorted versions of self-awareness would be a side effect, from gangsta culture to homophobia, but for different reasons having to do with how prestige is established. In other present-day macho American subcultures, street cred was established until very recently by getting a high-powered trading position at Goldman Sachs.

While I am on the subject of subcultural self-awareness, I wish I could see the new show at the Art Pavilion Zagreb, a building that is apparently an inheritance from the Hungarian Millennium Exposition of 1898 in Budapest. The Hungarians wanted to spread the wonders of Magyar culture to their subject peoples, so the pavilion was exported to the Croatian capital (then the provincial Hungarian town) of Zagreb to use for art shows.

No, actually the canny Croatians told the Dual Monarchy of Austria-Hungary that no way were they showing up in Budapest without getting some architecture in return. And since it would have been embarrassing to have had one of the nations of the great multi-ethnic, multicultural empire turn up missing, the Hungarian authorities assented.

And now we have, as an oblique commentary on this history, a show called "Neither From Nor Towards...Did You, Upon Awakening Today, See the Future from the Still Point of the Turning World?" This must be the actual title, in English rather than translated, because the keywords are all taken verbatim from T. S. Eliot's Four Quartets.

The show is a commentary on the heritage of illusory optimism bequeathed to us by world expositions (and we should note that one is taking place at this very moment in Shanghai...I hope to acquire a catalogue as I have done for most of the world expositions—and also the colonial expositions—from 1924 onward). The text of the "Neither From Nor Towards" press release says it all:

"The histories of world exhibitions are scripts for reading the histories of the world, revealing the global economic, political, ideological and power relations of an era, beneath their usual optimistic glow highlighting utopian visions and glorious prospects for the 'future of mankind.'

"The exhibition recalls not the structure or 'intent' of the world fair exhibitions, but what is left of the ghosts of their proclaimed belief in mankind and its future. Situated in the historicist art pavilion, exchanged between Budapest and Zagreb at the turn of the last century, it reflects the relations of histories of architecture, photography and the ideology of exhibition with histories of power and subjugation, as well as the histories of past utopian and futurological visions, embodied in the promises of architecture and technology. It wonders if it is possible today, after an era of identity politics and fragmented narratives, to see the world 'as a whole' and simultaneously question the very idea of the wholeness as one belonging to the Western imagination related to the ideas surrounding modernity, progress and colonial equations."

So is it possible to view the world as a whole in an era when we can't even view the history of the United States as a whole, as witness the divergent responses of different generations (if not ethnicities) to "Incendiary Exposure"? Good question, and Croatia has its own much-disputed ethnic histories to worry about, or, rather, to try not to think too much about. For when people think too much about them in the wrong way, bullets start flying.

If anyone can elucidate the image from "Neither From Nor Towards" with which this essay begins, I'd appreciate it. I have the feeling that the images by Morgan and Harris will be similarly opaque to the Croatians, although they might get Harris' The Greatest Fear, a race-reversed antebellum plantation scene set on the front lawn of the White House. Gone With the Wind was popular in the war-torn Balkans to the point of being parodied by the Trio collective in a Clark-Gable-and-Vivien-Leigh postcard announcing "Everybody wants to see GONE WITH SARAJEVO—most famous movie of all time."

A Google search for that postcard, of which I own a copy, turned up nothing until I typed in different keywords (duh) after writing this essay—I have deliberately retained my not-quite-right recollection of the text, above—but it was good to discover en route that Bosnian design continues to produce hiply contemporary and ironic pieces of design in the ensuing decades of fragilely enforced peace. Trio's most famous design, incidentally, is "Enjoy Sarajevo," the 1992-1993 ripoff of the Coca-Cola logo that they joked would rescue them from besieged Sarajevo, because the Coca-Cola Company would want to put them on trial in Atlanta for copyright infringement, and that meant that the Americans would have to come arrest them and remove them from the war zone.

This has been a digressive post, but as always, digressive by design.
Posted by littlejoke at 7:53 AM