a deliberately loopy recommendation to attend or contemplate an Eyedrum exhibition

“hymHouse,” at Eyedrum until the closing performances from 7 to 10 p.m. on September 26, is described as a twenty-first century homage to the example set by Judy Chicago, whose postcard from 1979 is framed and hung on the wall by the main exhibition statement. (Other highly useful notes and artist’s statements appear on foamcore cards next to the other artworks; this exhibition cannot be accused of withholding information, except in a very few cases in which the information ought to be obvious to everybody, but isn’t—which may be part of the point of the work.)

An evaluation of the strengths and weaknesses of the show is already off-limits to a male heterosexual art critic writing from a subject position that almost renders it impossible to say anything at all. Unfortunately, all of the women art reviewers who might have written about this show seem to have been too busy with their own immediate issues, including making a living by working three jobs (like artworld folks of almost all conceivable sorts).

So if I don’t tell folks they ought to go check it out, nobody else will. But I’m not offering a review, even if it sometimes looks that way.

The show is, to a surprising degree, about how we inhabit our bodies, and what we do with them while we are in them. We are not quite the same as our bodies, whether we are also immortal souls or just a bunch of socially influenced autonomic responses—but who we are is highly influenced by whether we inhabit a male or female body, and the socially shaped but largely preconscious sexual responses of that body. But regardless of the extent to which how we think and react can be changed by social and psychological circumstances, some things are primal.

And “hymHouse” is heavy on the primal and the basic social responses to the primal. It happens, however, to be specifically about how women in particular inhabit their bodies, and what they do with them and how others react to that, and that fact inevitably shapes the space of the discussion and perception by any individual writer. We never start from a universal standpoint, even when we think we do. (Those who think they do have mostly been men, incidentally, and in this particular culture, they have mostly been white, economically secure men. Just in case you were wondering.)

Stephanie Pharr’s vitrine documenting the detritus of menstruation (bloodstained panties that men without sisters or female live-in partners might not recognize as such) was counterpointed on opening night by the sight of her own largely unclad body covered only by a transparent poncho, the aforementioned genital-covering undergarment and a pair of emerald-green high-heeled shoes. The combination was disconcerting to almost everybody, and the social interpretation of this minimal combination, posted on Facebook, was also exceptionally thought-provoking, especially since the thoughts expressed in the comments were so incompatible with one another.

Andre Keichian’s video response to a wisecrack that “lesbians are so narcissistic that they just want to have sex with themselves” consisted of a sexualized wrestling match between herself and herself, projected between a chair that had been split in two and attached to the wall. The other video-and-sculpture contributions were similarly primary, if not primal: issues of pregnancy, personal grooming, and elementary forms of social interaction predominated in this contemporary homage to first-wave feminism. Questions such as how well women can handle the equations of quantum mechanics (hint: most women can do this about as well as most men, given the general innumeracy of the population) were not a topic of conversation. Co-curator Martha Whittington’s impressive accomplishments in mechanical engineering were not on display. (Stephanie Pharr and Onur Topal-Sumer were the other curators, and as I said above, I am not pretending to write a review of what they did with this exhibition; I’m just writing down a very few possible reactions.)

Part of what was on display, and on display quite exquisitely, too, was Lisa Alembik’s exercise in thoughtfully and elegantly imbalanced ceramics, an homage to her female forebears combined with a fresh take on Meret Oppenheim in a set of sculptural teacups and saucers with hair embedded or embodied in the ensemble. 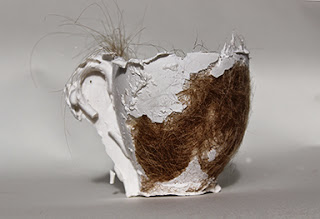 To discuss this further would be to say too little or too much.

Likewise, the opening night performances other than Pharr’s endurance work (it lasted from before the beginning until some unspecified time after the end of the reception) are difficult to analyze without the use of copious notes that I didn't make; performance goes away instant by instant as it unfolds, and in between performance times, there is only the physical residue and the mute testimony of the artworks surrounding the performance space. Like the daily activity of keeping any space habitable, the effort vanishes into forgetfulness, not into history.

And I for one am really sorry that the people who could have written about all this were too overwhelmed with other stuff to spend time producing essays that could have shed light on the successes and failures of a show that was apparently a year or more in the planning.

However, the closing reception, during which a full range of performances will once again be offered (though I couldn’t find out what performances) will happen on Friday night, September 26, so there is one more opportunity to set the historical record straight, or just to evaluate the exhibition for yourself if you happen to read this in time.