Hegel famously wrote regarding philosophical reflection, “When philosophy paints its gray in gray, then has a form of life grown old. Philosophy cannot rejuvenate it, but only understand it. The owl of Minerva begins its flight only with the coming of the dusk.”

The tropical sky colors that dominate one end of Kirstin Mitchell’s “Midnight at the Oasis” are those of dawn, not dusk, although the nearly monochromatic painting on the wall to the left could be taken to represent the blazing color of a tropical sunset. In any case, gray on gray has nothing to do with it. 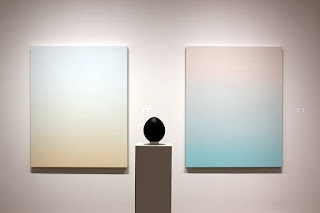 On the other hand, the diptych of rosy-fingered dawn flanks a pedestal containing a black egg-shaped sculpture, an archetypal image that leads in so many different contradictory directions (you could look it up) that we had better try not to overinterpret. At the very least, however, the dark interrupts the light for a reason. That it happens to be an egg, as dark as the midnight at the sort of oasis that is the source of life in the desert, would probably provide myth-oriented critics with a fairly rich vein of free association from which to extract more meanings than Mitchell ever intended to put there.

What is entirely intentional, however, is the faceoff between the paradisal brightness at one end of the gallery and the dark of Limousine at the other end. Here, too, however, the combination of elements is meant to defeat any easy retreat into symbolism; the dark-gray rubber sheet that forms a drape against the even darker panel is robbed of any purely funereal associations by the title, which evokes fashionable luxury as well as solemn occasions of state (although it also happens to be the proprietary name of the pigment found in the painting, which itself is a much more complex interplay of modes of darkness than it seems to be at first distant glance). 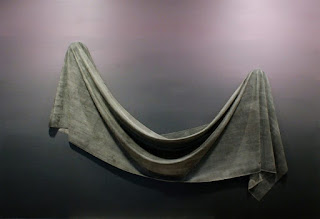 What is deliberate also is the use of rubber in lieu of woven cloth in the drapery that dominates the majority of the large wall pieces. The tensions between the sensual, industrial, and, not incidentally, tropical associations of rubber could easily lead critics off into yet another feast of free association, one that could fill volumes. 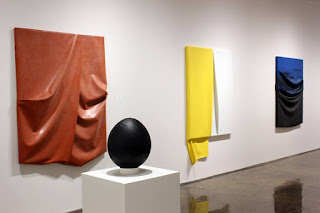 The tone of depth and sophistication established by the conscious arrangement of work on the gallery walls is undercut by the anomalous comedy of two vaguely fruit-shaped sculptures perched upon a chunk of Styrofoam flotsam in the center of the highly polished floor. The dark reflection of Limousine stretches towards the shore of this odd interruption, an oasis of humor in a conversation of color and form that encodes more serious matters than might first appear. (A blue cube also lurks in a corner between a purely white work on the left and the not-quite-black dark of “Limousine’ on the right, almost daring us to find symbolic meaning in a piece that may be there simply because it adds to the visual rhythm.) 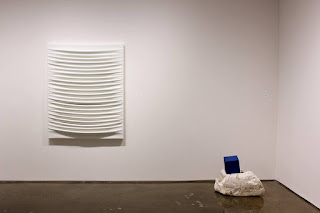 Any doubt as to whether we are meant to engage in intellectual free play as well as sensual enjoyment and formal appreciation of spatial arrangement is dispelled by Mitchell’s artist statement, which consists of artfully selected etymological passages from dictionaries, dancing adroitly among historical associations of the words used in the titles of the works and of the exhibition. We very quickly notice the presence of body fluids, social relationships, practical activities with symbolic implications, facts from the sciences, and enough other suggestive linkages to keep attentive readers busy for longer than they might wish. 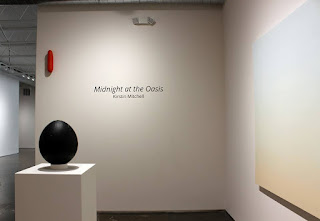 At this point, you have very little time left to view the exhibition ("you" meaning those of you reading this on July 8, 2017, within feasible distance of Hathaway Contemporary, in Atlanta, Georgia, U.S.A.) in something resembling tranquility. If at all possible, you should attend the closing reception, which includes artist talks by Mitchell and by Karen Schwartz, on July 11.

All photos in this review are © Kirstin Mitchell.
Posted by littlejoke at 10:10 AM