A Meditation for the Birthday of Thomas Pynchon

creative commons copyright Jerry Cullum, ‘cause I’m cool like that

A familiar eight-letter English word that tends to get blocked by parental-advice and work-safe language filters has had an entire book devoted to it, usually rendered in newspaper references as “On B***s***.” I have no idea what is in the book, but since I dislike typing asterisks I shall substitute, in this essay, the word “bulldot.” Copy and change it globally if you so choose.

I have noticed, however, that very few of those who are less than confident of their ability to impress with brilliance understand the necessity of well-crafted bulldot.

Before encountering the artworld object that is the actual subject of this essay, I had been thinking of a brief exchange in the film version of The Year of Living Dangerously, in which rival journalists are fuming over the explosively revelatory contents of an essay by a young competitor that has been reprinted by their editors. The younger of the aggrieved pair says to the elder, “Come on, Wally, you know that piece is bulldot!” to which the older man replies, “Yes, my friend, but it’s well-written bulldot, and it’s sitting right there on the front page of my employer’s newspaper.”

Provincial art scenes, too, have difficulty distinguishing between what is brilliantly baffling bulldot and what is merely blather, so I have always admired the Slovenes in this regard.

Even after Austria lapsed into its own post-imperial provinciality, Slovenia was still considered the minority province on the wrong side of the border; thought of as the least among the Yugoslav republics, it was the one you never heard anything about in the twentieth-century days when the Croats and the Serbs were inordinately proud of their writers and sculptors who attained world prominence.

But in the waning days of united Yugoslavia, a puckish group of intelligent merry pranksters who called themselves many things, Neue Slowenische Kunst, Laibach, and Irwin among them, set out to offend the powers that were in every artistic genre they could think of---including the academic disciplines of the social sciences. 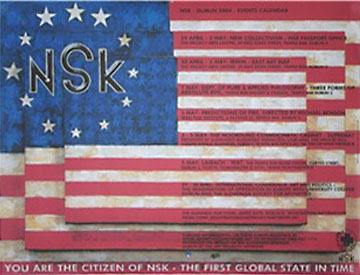 NSK became an artists’ state, the first “state in time instead of a state in space.” 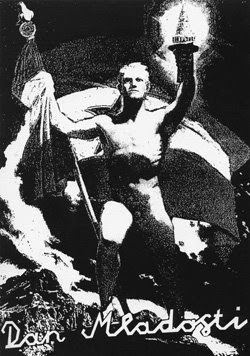 I leave Laibach’s rock music and various other aggressions to one side for the moment; these folks first gained fame for winning a competition for a Yugoslav government poster with a design that replicated, except for the flag and the specific wording, a Nazi propaganda poster. They gave their movement a German title and named their band after the German name for the Slovene capital.

And when, improbably, Slovenia seceded peacefully from the Yugoslav federation while the other republics sank into years of internecine warfare, NSK claimed the Republic of Slovenia as their most successful conceptual art project.

The NSK passports, which were issued to a good many Atlantans during the 1996 Olympics, had been used to cross physical borders successfully because the numbers coded into them had been lifted from the Slovene Foreign Ministry by a friend of the artists’ group. (How come nobody ever reminisces about the good old days when NSK and the director of Skuç in Ljubljana and Dah Teatr from Belgrade and similar folks came to Atlanta on an ongoing basis?)

And a present-day Slovene artists’ publication currently findable (not for long, I should think) in the Little Five Points Community Center illustrates on its front cover a webpage of the Slovene Foreign Ministry explaining that the NSK passport is not issued by the Republic of Slovenia and cannot be gotten from the Ministry. (I’ll believe in the authenticity of this web page when I access it myself, having had my name inserted into international news stories on newspaper web pages by a prankster friend who didn’t know he was doing conceptual art.)

Now, there is a longstanding relationship between some Tennessee conceptualists and Slovene conceptualists, which I assume is how this Slovene newsletter found its way into the Little Five Points Community Center. I have forgotten who is responsible for this longtime collaboration, though I would suppose that the infamous Beauvais Lyons has something to do with it.

I’ve always had problems with Beauvais Lyons because his elaborately thought out cultural fakes always have more ambition than consistent success (a more generous way of putting it is that the bodies of work are designed to make obvious that his archaeological reports and folk art collectors and such are completely fake, and I put it that way once in a review of his show at Eyedrum). His ideas sometimes outrun his capacity to pull them off, and a collective effort might have worked better than a solo operation if he had wanted to produce a fully convincing piece of smart fakery.

But at least Lyons understands what intelligent bulldot ought to be. And so do the Slovenes, to judge from this publication, which is as full of pompous bulldot as any post on the Atlanta artnews listserv ever was.

The Slovenes, unlike many of the Atlantans who blather on, have absorbed the lessons of the adjacent cultural capitals and produced their own equally ambitious parodies, queries, and more than merely querulous interrogations of the big boys. They have understood the big boys (and they are boys, mostly) at least well enough to make fun of them.

It helps to have a history of being a cultural and political outrider of an empire a short train or bus ride away, but there have been years in which artists had no money to ride the train, or passports to cross the border. They figured out ways to do it anyway.

And, of course, one not only has to know what the other folks are doing, one has to have the inspiration to create something original that will stand up to criticism. If one is supporting one’s efforts with theoretical bulldot, the efforts had better look good enough, and the bulldot had better be brilliantly baffling.

And by the way, it helps if the artists actually have something to say that is worth saying, although to judge from the lesser scions of the Slovene conceptualists that seems to be optional.

But thoughts that are well thought but poorly expressed will also get no points for trying, simply because (and I can testify to this from my own experience) no one will even be sufficiently baffled to bother with them.
Posted by littlejoke at 5:56 AM