she's as fine as Tupelo honey: Richard Sudden suddenly remembers, and kicks our butts at Whitespace 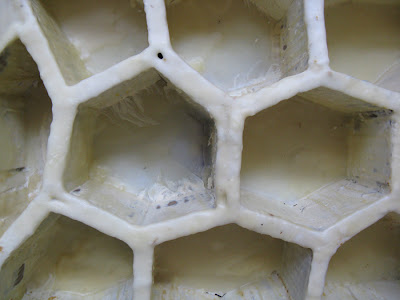 Plato’s doctrine of anamnesis, that we do not learn but only remember that which was already embedded archetypally in us, is rightly derided by empiricists. Plato probably had his head up his posterior, a posture that can only be assumed by those philosophers who, as Friedrich Engels said of Hegel, are standing on their idealist heads and need to be turned round and set on their material feet.

But one almost has to suppose that Sudden has remembered a good many things he claims he never knew, in order to explain the cumulative impact of “For the Waters of Lethe,” one of the great accomplishments of mythic thought in recent times in this benightedly flatfooted burg called Atlanta.

In addition to providing a spectacular number of full-scale symbolic and sometimes also functional kayaks (about which, more below), Sudden set out to make his myth of Mnemosyne into a black-and-white film that was a conscious homage to Ingmar Bergman. Thus, his star and Swedish translator Ms Liselott Johnsson (whose Madison Contemporary art center in Madison, GA is a venture for which we need to be on the lookout) and his film editor Jason Vise collaborated with Sudden's deliberately Bergmanesque camera work to produce a myth for our times that is also an echo of an earlier cinematic one. As is appropriate for a tale about memory.

Johnsson provided the voiceover and the Swedish, but it was Sudden who wrote the story in English, and a good story it is, too. An old story, skating along the edge of twice-told tales told two times too many, but his use of resonantly archetypal shapes helps give appealing form to the narrative…kayaks like ritual coffins returning the dead to their mortal domain in an act of contrition, undoing a goddess’s rash magic. Memory/Mnemosyne, the mother of the nine Muses of art and science, repents in time to rescue from forgetfulness the artist and wife/personal muse whom she has driven to suicide, and they return to earth recollecting their fortune because they have not drunk of the waters of Lethe.

The task of memory is what Rainer Maria Rilke says we’re here for, and which the Duino Elegies is all about. As Rilke wrote to his Polish translator, “It is our task to imprint this temporary, perishable earth into ourselves so deeply, so painfully and passionately, that its essence can rise 'invisibly' inside us. We are the bees of the invisible. We wildly collect the honey of the visible, to store it in the great, golden hive of the invisible. The Elegies show us at this work ...”

Well, Sudden has the relevant volume of Rilke on his bookshelf right next to the collected poems of yours truly Jerry Cullum in which the Elegies form the scaffolding for my poem of memory in Atlanta and the Balkans, “Skateboarding in Sarajevo.” So there’s a pretty good chance he saw at some point that famous footnote to Rilke’s poem, because the boats (built from kayak plans) that are the major sculptural aspect of his exhibition include an homage to the shifting seasons in which illuminated honeycombs are a major focal point.

But he had forgotten having read Rilke’s claim that we are the bees of the invisible, even though his whole metaphor of memory is that we are, in fact, the gatherers up of the visible aspects of the world, turning it into the invisibility of what we recollect because we collected it in the first place.

Sudden’s beeswax-covered drawings in the Whitespec project space continue the metaphor of human beings as bees of the invisible, as well as voyagers on the waters.

But we are, he implies, blind voyagers, because his drawings of the meanings of myth are done on Braille paper. (I have no idea, being sighted, what the Braille text on the paper actually says. Like those nonsense Chinese characters used in hip interior design or the nonsense English words that appear on European sweatshirts, the Braille is there to deliver a metaphor, not a message...but Sudden informs me that the pages that I cannot read are from the Book of Psalms.)

Sudden’s extraordinarily delicate drawings are shorthand symbols for the wanderings of Odysseus and a couple other of the odysseys of mythic heroes, involving arrival at the Isles of the Blessed or other risks of the underworld, of departure and return, of the hero’s journey not as a macho conquest of obstacles but a risk-laden search for knowledge and return to an original home that has been lost and must be found again. And found, perhaps, without all the senses that one would need to find it with clarity.

Odysseus bound to the mast, with his men's ears stopped up with beeswax(!), the neo-Platonic allegorists knew, is a type of the searcher who must learn to overcome the lures of the senses in order to stay focused on the goal (and to make sure his associates avoid temptation, while he is at it). And the same lesson is taught by the Asian models of spiritual search that Sudden also knows and loves…Tibetan tantricism and Late Antique neo-Platonism preach parallel doctrines of liberation, though they are not identical doctrines of liberation.

So Sudden has got it all together, although he may not know why or even whether he has got it all together. And he certainly doesn’t communicate his intuitions with any degree of clarity. They sink in slowly, and it takes several viewings and a few days of contemplation before there is any confirmation of the initial reaction that this is so emotionally overwhelming that it must all add up to something.

And as in any traditional tale, in which figures drop in and leave the story at will, there are probably still loose ends left hanging. But the human story is a tale of unfinished ventures, and none of us can be expected to remember enough to recall our real destiny and what all this assorted pile of fragments shored against our ruin has to do with it.

There are traditional spiritual techniques by which memory can be and should be extended. But there is also the hard reality of the decay of our brain’s neurons and synaptic connections: it was watching a case of Alzheimer’s that set Sudden off on his latest symbolic quest, and we do well to remember that this vast mythic apparatus stems from a very specific and mundane pain. This huge array of sculpture and cinema springs from what Yeats called “the foul rag-and-bone shop of the heart.”
Posted by littlejoke at 9:51 AM