a footnote to reviews not yet written

I have more posts about accidental overlaps in recent Atlanta exhibitions than I have time to write. So I shall instead report that the touring "Dinosaurs" exhibition opening tomorrow at Fernbank Museum of Natural History is an extraordinary piece of exhibition design as well as a thoroughly informative update on recent thinking regarding the great saurians and their demise and/or continuation.

Leaving aside the biomechanics of motion, which is explained succinctly in a manner calculated to entertain adults and educate children, I wish to comment upon the remarkable diorama of a Chinese landscape of 130,000,000 years ago: 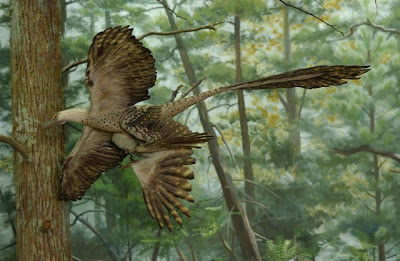 You will notice the look of this creature, which appears in close proximity to this one: 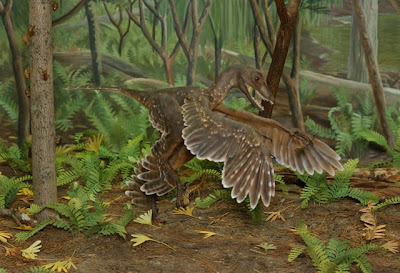 Now, those who read the Science Times closely will know all about the proliferation of recent discoveries of previously unsuspected species of feathered dinosaurs and such. Anyone over the age of twenty-five who last checked into the status of paleontology in their childhood is woefully misinformed.

Even those who read the National Geographic updates more than a few years ago are woefully misinformed. The exhibition presents not only the changing opinions of how fast dinosaurs could move, it lists the hypotheses for their extinction that have now been definitively disproved or rendered so improbable that they may safely be dismissed.

This has set me to thinking again (well, actually, reading Gary Indiana's Utopia's Debris concurrently with George Steiner at the New Yorker and the new issue of the New York Review of Books has set me to thinking again) of the necessity of re-presenting and rethinking the entirety of human culture every ten to twenty years. (Ten years or thereabouts for rethinking, twenty for simply re-presenting.)

Anyone who has witnessed the fortyish Old School thinkers being vituperative about the sixtyish Older School thinkers will feel rather grateful for the examples of such deceased worthies as Susan Sontag, who had no difficulty discarding her early opinions if she decided they were wrong. As she said late in her life, and I quote Gary Indiana's essay from memory, "You become old when you start acting like an old person."

We are now at the far side of a fundamental shift in everyday perception, and it is in the process of bringing about the demise of such venerable institutions as the daily newspaper, the weekly newsmagazine and at least the throwaway species of hard-copy book. (Kindle and its kinfolk won't obliterate the lovelier versions of bound volumes any more than the compact disk wiped out vinyl or paperbacks destroyed hardcovers.) Magazine distributors are shutting down abruptly and new economies of scale are appearing throughout all the media of information creation and retrieval.

But what is more significant is the shift in habits of language, the quick transformation of traditions, the disappearance of some forms of social gathering and the rise of alternative ones...it all affects how or even whether we read, say, the epigrams of Martial, regarding which the NYRB publishes a lovely critical review of Garry Wills' gracefully pornographic renderings.

The review of Wills' reinvention of the Romans' less respectable species of writing (which has inspired generation upon generation of gleefully adaptive transgressions) is followed in the issue by Zadie Smith's lecture regarding those who switch easily among many different vernaculars from the different communities...of which she finds President Obama's Dreams from My Father a particularly instructive example.

The idea that there might not be only one way of keeping it real is germane to my topic: writers and cultural information fall out of fashion if they are not constantly updated or rediscovered. Eventually even the oldest interpretations take on a fresh relevance, but if there is not an attempt made to interest each successive generation, or even the generations that have gotten tired of thinking about the stuff, the result is akin to letting data sit on modes of information retrieval that don't work on the newest generation of data readers.

Think of older critical surveys as the equivalent of eight-inch floppy disks...perfectly readable by legacy equipment, but unintelligible to newer models. The challenge, and it is a daunting one, is to find ways of transferring the inherited information of the world's many cultures into modes that fit the world of 2009.

Especially when so many books based on the assumptions of, say, 2003 have suddenly turned quaint-seeming, whereas texts from 1930 take on a new air of contemporaneity.
Posted by littlejoke at 6:35 AM