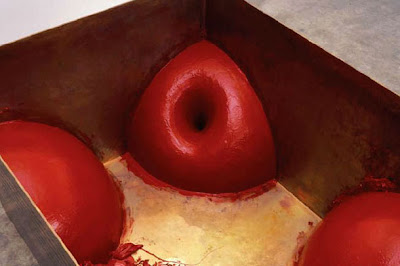 I shan't be seeing this in person, but who knew (in my small circle of friends) that Salman Rushdie had once collaborated with Anish Kapoor on a work of art? on display at Fabrica for the Brighton Festival.

During his annual residency in Atlanta, Rushdie gladly told the tale of his meeting with Thomas Pynchon but not of his collaboration with Kapoor. You have to know what questions to ask.

Kapoor is one of those figures who interested me early on in my career as an art critic but I've not kept up with him in detail in our present century.

It is past time to revisit a good many artists who have kept on keeping on in spite of no longer being the famous flavor of the month. Even the superstars of yesteryear have lapsed into taken-for-granted-ness now that the standards of what used to be called cool have altered to fit the new millennium's demand for continuous page-refreshing. (As the New Yorker used to say, block that metaphor.)
Posted by littlejoke at 9:08 AM