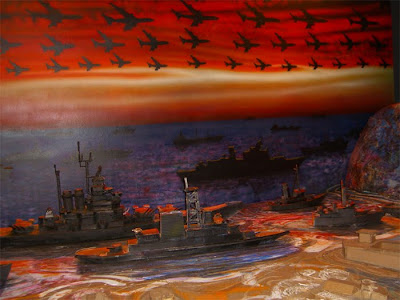 The Roman playwright Terence (I think) is famous for his “Homo sum; puto nihil humanum alienum a me.” Kwame Anthony Appiah points out that this Family of Man type of saying, “I’m a human being; I don’t think anything human is alien from me” is followed up with the line that therefore “if I think you’re right, I’ll leave you alone; if I think you’re wrong, I’ll endeavor to set you right.”

But those of us who never feel completely at home in any situation are painfully aware of the problem of communicating across cultural boundaries, including the communities we actually live in, and of the particular difficulties of ever “being right.”

So imagine my surprise the other weekend when I dropped by Agnes Scott College’s art gallery to take another look at “Limitless,” and found myself in the midst of what appeared to be a tour group of retirees from Eastern Europe. I imagined how the tour guide must be challenged with explaining Didi Dunphy’s padded see-saws, E. K. Huckaby’s deliberately distressed paintings and Department of Dysiatrics, Klimchak’s theremin and homemade musical instruments, and Martha Whittington’s erasing machine, where its origins in a Leonardo da Vinci design would be the easy part of the explanation.

Actually, the group was as sophisticated as you would expect a tour group from somewhere in the former Soviet bloc to be, one of them asking to be reminded if the theremin wasn’t invented by a Russian “twenty, thirty years in the last century” (meaning the 1920s-1930s), and another taking enormous pleasure in Huckaby’s not-so-Southern Gothic sensibilities and asking how to get in touch with the artist.

I was tremendously worried, though, as to what they would think of Joe Peragine’s huge, allegorical diorama of a military invasion, a commentary on the tidied-up world of history dioramas in general. Peragine mixes historical era and levels of skill, emphasizing the artificiality of the diorama genre by using unpainted cardboard cutouts in the foreground, more convincingly painted ship models behind those, and a large background painting continuing the theme of overwhelming seapower, with fleets of B52-like bombers massed in formation overhead.

It’s a complex commentary on how we perceive the messiness of history through a romanticized filter. (The luridly sentimentalized colors of the backdrop refer to Peragine’s previous series of paintings exploring this topic.) I suspected that all the retirees would see was a vivid reminder of the Wehrmacht rolling across the plains of Ukraine and Byelorussia or blitzing the cities of the Russian Front.

And I was right. They said through their translator that this reminded them of things they had seen in the Second World War, and one wanted to know if this represented a specific battle. So the work required some explanation of the place of artifice in the representation of history and how combining successive generations of military hardware and levels of sophistication in the representation meant that…well, actually, gallery director Lisa Alembik and I made no such remarks. She did talk about museums and how they tidy up history with adorable miniatures when the original was a big, horrible in-your-face reality. This latter fact, these folks remembered very well.

When I asked where they were from, there was a debate about how to describe “a country that no longer exists,” and the translator settled on, specifically not Russia, but “the former Soviet Union.” (From the discussion I began to wonder if they were from two or three adjacent former Soviet republics; one of the younger members of the group, perhaps even from the immediate postwar generation, introduced herself in English as being from Leningrad.)

In any case, I suspect their country was indeed still the Soviet Union when most of them left it to come live in metro Atlanta. I once learned from the daughter of a post-WW2 Russian émigré that many members of the postwar emigration never completely mastered English even after decades of living as almost the only foreigners in the smaller cities that accepted them. Later generations of émigrés would presumably have faced even greater challenges of adopting a very different language later in their lives.

The young translator, whether out of incomprehension of my question (but not because of any lack of fluency) or unwillingness to discuss it further, would say no more than these were part of a local adult day care program that arranged day excursions. “Adult day care” might be taken to imply some degree of impairment, but the only obstacle these folks were facing was a need for company and a lack of fluency in the English language.

So I felt I had had an instructive day trip, myself. Just when you think you have gotten to know all the diverse communities in this very multicultural burg, another one confronts you with a challenge of translation in more ways than one. I once wrote about the challenges of writing art reviews just tailored for audiences aged eighteen to eighty who shared historic U.S. ethnicities; throw in not just the rest of the United States but the rest of the planet, and—well, there you have it. On the internet, but not only on the internet, the world is already here. (But the whole world is not watching, and that too is part of the problem.)
Posted by littlejoke at 7:42 AM

I really enjoyed reading this post. Fascinating how an experience as a viewer can be quickened or transformed by the presence of other viewers, given the right circumstances.