Falling Through the Cracks: "Folium darwinii" at the Seen Gallery, Decatur, through March 17 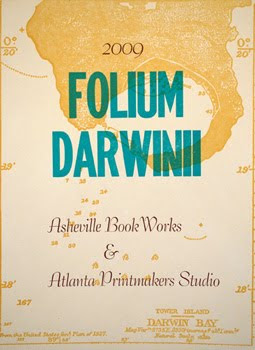 One of the many pitfalls of transitional art reviewing in metro Atlanta is that shows presenting a certain number of practical and conceptual challenges tend to slip by unreviewed.

"Folium darwinii" is an exceptionally interesting portfolio of prints produced in 2009 for the Darwin bicentenary by Asheville Book Works and the Atlanta Printmakers Studio. My attempt to photograph the individual works failed dismally and insofar as I can determine from a quick survey of websites, the actual pieces are not reproduced online.

The works range from an attractively ambitious timeline with portraits to allegories of the voyage of the Beagle to an evocatively lyrical nightscape. The whole portfolio holds its own against other Darwin homages from the bicentennial year, and deserves the kind of reflectively critical review that I have found myself unable to write for a wide variety of reasons.

Apparently no one else was able to write one, either. As one might expect from a collaboration that was based on a call for entries from two membership organizations, some of the contributions are more conceptually inspired than others, but none are unworthy of consideration. In a less disordered art critical universe than the one we currently inhabit, "Folium darwinii" would have gotten its due, even if that due would have included some moments of negative critique.

In the year 2009, in the American South, the simple collaboration on an homage to Charles Darwin, using traditional printmaking media for contemporary critical purposes, was a political act as well as an artistic intervention. It should have stirred at least a little conversation.

But first somebody would have had to have found the time and the mental energy to discuss the individual pieces in some depth, evaluating their successes and failures and asking whether any of them delivered a successfully complex message as well as an aesthetically pleasing homage to the author of The Origin of Species.

And this, for many reasons, I was unable to do. Given competing needs and the brief time remaining before the close of the exhibition, I am assuming that no one else will feel inclined to do so, either.

If they do, I hope they find it easier to produce acceptable photographs of the artwork.
Posted by littlejoke at 11:57 AM

What role has Reason held previously, in your doing or not doing something? Do it.

I have a vague suspicion that, if you were to ask the folks responsible whether they had suitable images of their work, they would somehow come up with such.