Paradise and Its Transformations 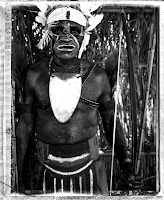 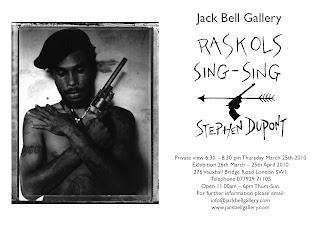 Paradise: Somewhere Between Lost and Found, as Always


The purpose (or one purpose) of art is to wake us up, but it seldom wakes us up according to art historical or curatorial schedules. Like the patch of yellow in the View of Delft that alters Bergotte’s consciousness in Proust, art always communicates more (or less) than the maker of the art intended. All art is relational art, but it is the audience that provides the majority of the long-term content; the artist provides the catalyst, via an immense amount of craft and imagination.

Stephen Dupont’s photographs from 21st century Papua New Guinea are a provocative catalyst indeed, but I shall not address them directly. This is not a review, for I have not seen the exhibition itself.

Works of art such as Dupont’s serve to remind us of just how many countries there are that seldom or never send representatives to more than regionally specific biennials (or to residence in the world’s art capitals, which is usually a prerequisite for representing one’s country in the global biennials). They also seldom generate world-changing events, and until they do, we tend to know about them only through the equivalent of high-class travelers’ tales—when we know about them at all.

Given the number of microstates generated by the accidents of colonialism, such countries cover a substantial part of the world’s surface (albeit as islands in the midst of oceans) and may now constitute close to a majority in the United Nations.

Papua New Guinea is no microstate, given its occupancy of the eastern half of one of the world’s larger islands plus adjacent archipelagoes. Given its proximity to Indonesia and Australia, it is anything but isolated from global currents. Yet most artworld habitués outside of Australia and the Pacific are likely to know it only from college courses in cultural anthropology.

My first contribution to newspaper (rather than art magazine) reviewing dealt with “The Art of New Guinea,” a Georgia State University exhibition drawn from the personal collection of Atlanta artist Michael Murrell. I delivered the standard thousand-cultures-and-languages now-an-independent-country spiel as a way of getting into the discussion of Sepik and Highlands art and personal decoration. There was no room to do much more. (Murrell hadn’t traveled to the Asmat, so the West Papua issue didn’t arise.)

I had gotten deeply interested in the politics, economics, and art of Papua New Guinea during the mid-70s run-up to independence, and was happy to revisit the topic thirteen years later. I knew a fair amount about the paradoxes of the place; the highlands that hosted the tribal sing-sings that were such a tourist draw were also a place of smallholder coffee farms, which had brought relative prosperity to some of the individuals who annually changed out of t-shirts and khaki shorts and into traditional sing-sing regalia. The birds of paradise whose feathers were used for the costumes could now be hunted with shotguns, according to one commonplace. The standard journalistic contrast that followed such observations usually cited the traditional communal houses along the Sepik River versus the gleaming multi-story architecture of Port Moresby, usually with the note that there was no way of getting from one to the other except by airplane or, in the case of the Sepik, thoroughly versatile boat.

I was fascinated by the fact that the national airline Air Niugini’s in-flight magazine was called Paradise. The title was suggested by the association of PNG with the aforementioned birds of paradise, which had gotten their name centuries earlier when the legless condition of the skins sold by traders suggested the myth that the birds soared eternally in the skies of Eden.

PNG’s major brand of export beer also promoted itself as “the beer of Paradise,” and a decade or so after Murrell’s show I duly included one of its magazine ads in my own Georgia State University exhibition, “Paradise and Its Transformations.”

But Paradise as mythic topic goes hand in hand with Fall and Expulsion. Reading the updated Lonely Planet guide to PNG at the time of Murrell’s show, I noted that once-recommended idyllic spots on the fringes of urban areas were now regarded as off limits to lone travelers because they were frequented by the local “raskols.”

I had previously been aware of the existence of a PNG urban gang culture that derived its visual style from the sources that gave birth to such films as The Harder They Come. Until I received word of Stephen Dupont’s show at Jack Bell Gallery, I had no idea that raskol culture had not only survived into the 21st century but had helped to gain Port Moresby a reputation as one of the most dangerous capital cities on earth.

The reasons cited in online sources are standard-issue: as the urban magnet for the displaced and disaffected of every one of the country’s subsistence-economy regions, the city has an unemployment rate of sixty per cent. Insufficient revenue has led to the effective abandonment of a few of the handsome buildings bequeathed to the government at independence, and the resultant migratory quality of some government ministries is said to be symptomatic of far more consequential financial shortfalls.

The commonplaces regarding the country have shifted without tourists outside the region paying much attention. And indeed, there seems to be little enough reason to do so for most visitors; urban areas hold only eighteen per cent of the population, and the Sepik River of the tourists and anthropologists is very far away. A perusal of on-site blogs (one discontinued due to inconsistent availability of broadband) reveals that even the volcano-devastated town of Rabaul seems to be rebuilding with some placidity. (Lonely Planet also remarks that "gritty" Port Moresby's reported problems are somewhat exaggerated.)

Stephen Dupont’s “Raskols” and “Sing Sing” portraits, viewable online as well as at Jack Bell, provide an abbreviated symbolism for PNG’s present-day stresses. The sing-sings, colorful tribal get-togethers that were begun fifty or sixty years ago at the encouragement of Australian administrators as a means of cohesion among rival groups, remain popular tourist attractions as well as genuine local social events. (Think Mardi Gras…these are not like the familiar rituals that are revived whenever a tour group shows up to pay for them.) The raskols are better thought of as a tourist anti-attraction. Dupont gained access to both. (Last year the Highlands were reported as inadvisable for tourists due to renewed inter-tribal conflict...and yet the 2009 Goroka Show went on without incident after financial issues caused its near-cancellation; see http://www.trupela.com/2009/09/13/more-photos-goroka-show-2009/. The same site reports a November 2009 clash "between two rival clans from the Upper Asaro area over the ownership of a Coffee Plantation" and offers video documentation of the robbery by raskols of a Madang computer store in October 2009. The details of both stories are instructive. Without Dupont's show, it wouldn't have occurred to me to follow the links leading to this remarkable in-country online source.)

Dupont’s striking documentary portraiture doesn’t give us a total picture of today’s PNG, any more than Vermeer’s patch of yellow gave Bergotte a total view of Delft. It does, just like the symbol as cited a generation ago by Paul Ricoeur, give rise to thought—and to productive investigation. I am en route to renewing my long-distance acquaintance with a complex and massively changing country.
Posted by littlejoke at 7:31 AM