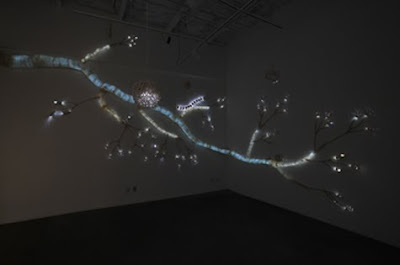 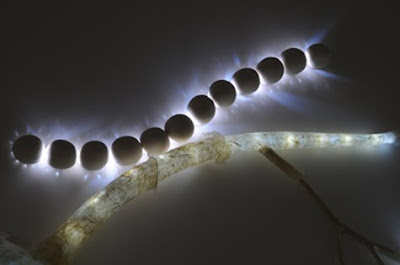 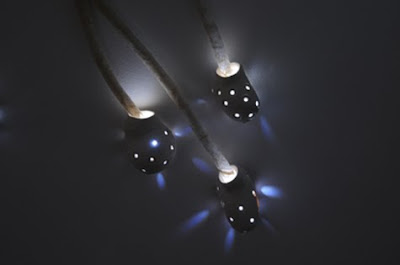 Please contemplate the images at left, borrowed from the relevant page on the Kiang Gallery website, http://www.kiang-gallery.com/artists/williams/index.html (which will change soon enough, in the nature of changing exhibitions).

The piece will be installed through May 1, but I have been unable to revisit the gallery during its Thursday - Saturday days of operation, and haven't been able to focus my attention sufficiently to do justice to this remarkable artwork in a style that would be suitable either for burnaway.org or for artscriticatl.com.

So I am throwing in the towel and typing words straight off the top of my head on Counterforces.

The LED lights, powered by the solar panels on the roof, blink off and on in a variety of rhythms derived from mathematical relationships that have a long and arcane history. A real review would delve into that history (the relationships, which are found in universes of discourse ranging from yoga to evolutionary biology, are merely summarized below). It would then discuss how brilliantly Williams has united the perennial themes of history and nature, nature and culture, biology and mathematics, the underpinnings of our material world and how human beings have interpreted and analyzed those underpinnings. It's all right here.

That the sculptural shell of Radicis is made from mulberry paper and thin porcelain is a material wonder in and of itself. The interplay of highly traditional craft media—here used to create an object that is indisputably a contemporary sculpture—with a highly contemporary combination of solar-powered batteries and LED-light patterns controlled by a microprocessor: well, that imaginative mix and the question of the customary genres that the work productively violates—those two issues deserve extended analytical reflection just by themselves.

The fact that these traditional and contemporary media are shaped into the form of a branching tree suggests the need for another few thousand words on Radicis' implicit combination of literal and symbolic meanings, and the amount of theory and history that has gone into the making of this piece. ("Radicis," as anybody who took Latin in high school knows, is a genitive that means "of the root." But this is root and branch at once. And the forms along the stems are not fruits, but analogues for types of organisms situated on the great tree of life...see Williams' quoted statement, below.)

The problem for me is, it's all too much. The sheer quantity of issues requires extended reflection, condensation—nobody really wants to read something of New York Review of Books length in a simple exhibition review—and an adroit prose style, so as to produce a readable yet adequate review of something so incredibly ambitious and complex.

As with "Folium Darwinii" last month, the challenge is more than I can face at this particular moment. These are pathetically preliminary and offhand prolegomena to any future review of Radicis.

Instead of a review, this is an unambivalently emphatic heads-up for reviewers and viewers to make maximum use of this month of April and get to Kiang sometime during their hours of operation. (Thursday - Friday 11 - 5 pm, Saturday 12 - 5 pm).

Here is Williams' summation of the various cycles at play in Radicis. Please note that her programming of the cycles combines a knowledge of the current state of research into human physiology and the psychological reactions that stem from that physiology; a quotation of the basic rhythms of breath in traditional yoga; and the fabled Fibonacci series reflected in the structure of so many forms in nature.

"Short summary of the 4 light cadences in Radicis:

"Cadence #1 is a 'steady state.' I assigned steady state to the root forms, as plants and trees are constantly interchanging the food materials they produce with other organisms.

"Cadences 2 & 3 were tied to human body rhythms in part to control the impact of the Radicis environment on its viewers. If the cadences were too frenetic, the mood of the piece would be very different.

"Cadence #2 is an 8 beat cycle, timed to a pranayama breath cycle. This yogic breath cycle tends to induce a calm, alpha state. The objects signifying single celled symbiotic organisms were assigned this cadence.

"Cadence #3 is a 4 beat cycle, timed to a regular daily breathing pattern. This is an everyday, beta state, breathing cycle. The objects signifying either single celled predatory (plant eating) or parasitic organisms were assigned this cadence.


"The higher up in the sequence, the closer two consecutive 'Fibonacci numbers' of the sequence divided by each other will approach the golden ratio (approximately 1 : 1.618 or 0.618 : 1)."

Why this extraordinary sculpture has not been the only topic of recent art conversation in the city of Atlanta, I have no idea. Go see it. Go write about it.

I wish I could. But I can't. Someday, maybe.