What Is Art, Anyway? IRWIN Answers With Hugo Ball's Reply at the Cabaret Voltaire 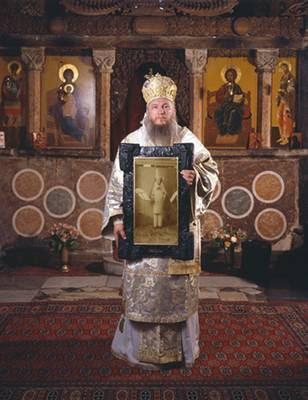 "What Is Art Hugo Ball" is an exhibition by IRWIN at the Cabaret Voltaire in Zürich which was scheduled to open on April 20.

Methodius Zlatanov, depicted here, is the Metropolitan for the United States and Canada of the Macedonian Orthodox Church. I have no idea whether he actually read from his "Die Energie des Unaussprechbaren: Gebete für H.B." I must presume that my readership will recognize the famous photograph of Hugo Ball reading at the Cabaret Voltaire, which he is holding in lieu of a more traditional icon such as the thoroughly customary ones on the iconostasis behind him. (I shall refrain from exegesis of the functions of the icon in Eastern Christianity.)

I'm hoping to track down more details on all of this because Hugo Ball's eventual embrace of Byzantine Christianity as well as Dadaism and IRWIN's dryly witty and paradoxical repetition of moments of modernism are both topics with which I have been intimately involved since I began my career as an art critic.

N.S.K. passports were issued during IRWIN's visit to the Atlanta Olympics, and many of my colleagues are passport holders of the first state in time rather than space. I have been a fan of N.S.K., IRWIN, and Slovenia for many years now though I am highly unlikely ever to encounter any of them again in whatever future remains to me.

It is curious that this exhibition should appear at just this moment in time.

The German original of the more or less translated document below can be found at http://www.cabaretvoltaire.ch/aktuell/aktuell.php?ID=179

What is art Hugo Ball

The Slovenian artist group IRWIN presents the exhibition "What is Art Hugo Ball" dealing with with Ball's book, "Byzantine Christianity" and illuminated with a Dada Byzantine Orthodox Gnosticism.

IRWIN was called at its founding in the early 80's Rrose Irwin Sélavy, marking their relation to the work of the most radical and most famous representative of Dada, Marcel Duchamp. IRWIN is working with selected and existing images - symbols, figures and compositions - on a similar principle to the one with which Duchamp dealt with the cylinder dryer, the urinal basin or the front wheel of a bicycle. The hallmark of IRWIN are sedate large frames in which they present works that are often not by themselves. One such work is the famous icon of Suprematism, the Black Square by Kazimir Malevich (1913). IRWIN explores with him the function of art, using icons that are not only images but also ritual instruments. They have now reached the founders of Dada and say: What is art with Hugo Ball. Hugo Ball and his "Byzantine Christianity" connects IRWIN to the Orthodox icon and gives Dada the same function as the icon as Hugo Ball understood this, as a Gnostic experience.

At the opening of the exhibition "What is art Hugo Ball" the Orthodox Christian Metropolitan of Macedonia, Bishop Methodius Zlatanov, travels to Zürich to read poems from his series: "The energy of the unspeakable: Prayer for HB."
Posted by littlejoke at 10:09 AM