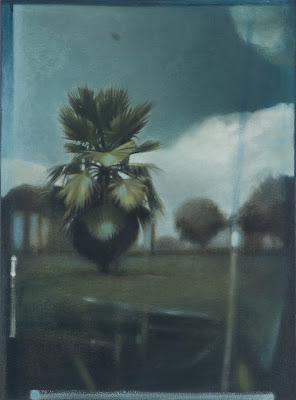 I keep wanting to write some comprehensive essay on the neo-romantic imagination in the 21st century...my sense is that the genre has passed beyond both naiveté and cynicism and attained something like what the late Paul Ricoeur termed "second naiveté": which is a bit like Heinrich von Kleist's assertion in "On the Marionette Theatre" that we must eat again of the tree of knowledge in order to return to the state of innocence. (Kleist's protagonist thought that this would be "the last chapter in the history of the world," but we won't dwell on that.)

Katherine Taylor's paintings on canvas and works on paper (watercolor and charcoal) at Marcia Wood Gallery are virtuoso departures from Taylor's earlier explorations of the imagination of disaster, although at least one such storm-damage image plus a video of a road trip through territories of hurricane devastation are also part of the exhibition.

The repeated images of dreamlike palm trees are rendered in a blur that is paradoxically exact; Taylor works minimally, each brush movement creating the illusion of maximum visual information. (Closer attention reveals a mix of degrees of blurriness that might be possible to sort out in terms of whether midground or background are in sharper focus, but the effect is still more that of a landscape recalled in memory or archetypalized in dream. This is not changed by the fact that the visual clues in the foreground suggest that the scene is being viewed through a closed car window—movement being another naturalistic reason for blurriness.)

Elizabeth D'Angelo's archetypal portraits at Callanwolde deserve more attention than I have as yet found time to give them. Simply the title of Beyond Grey Matter Matters and Beneath Flesh Water Winters deserves to be recorded as a one-line poem akin to Apollinaire's double and triple puns in "Et l'unique cordeau des trompettes marines" but the painting itself also needs to be seen: 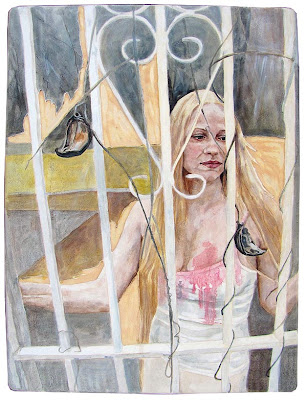 D'Angelo's metaphor of the "artichoke heart," another inspired play on words, is a lovely image, given the fleshiness of the artichoke leaves that are peeled off in layers en route to the center. And here is You Expose My Artichoke Heart, which is an unusually simplistic title for D'Angelo's baroquely artichoke-layered imagination: 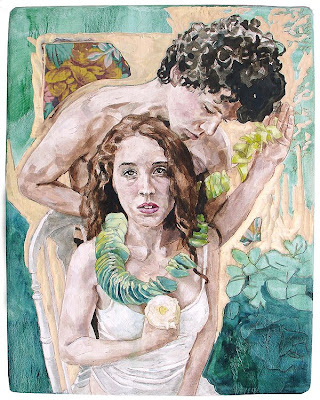 The sheer variety of people and implicit personalities symbolized in this show is worthy of note, and invites a very long process of thought that I don't have time for at present. Here are I Am Deep Quinachrodone Violet and I Am, Therefore I Am—and the existentialist riposte to Descartes in the latter is probably so mirrored in the details that the work demands to be read in the sense that, say, Norman Bryson "reads" a still life. (Pure free association, but one could describe both Taylor and D'Angelo's shows with the title of the Bryson book I have in mind: Looking at the Overlooked.) 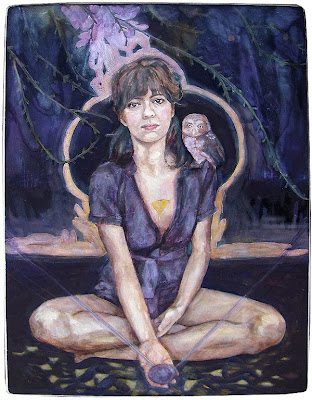 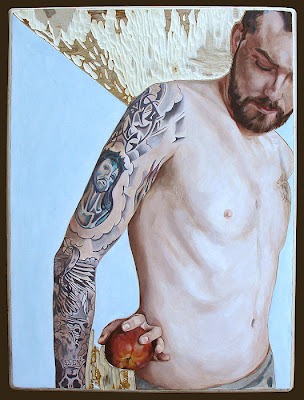