questions which tend not to edification and answers that do

It came to me in the night that the artists in this burg (and longtime readers of my non-art blog or former venues in which to read my stuff know to which burg I refer) have no idea how marginal most of the art scene really is...not just the makers but the venues and the ones who write about it. When by default one of the best art sites online depends on writers who get around by bicycle, then the great tradition continues of art writers who get by via holding down a non-writing real job, or more usually two real jobs, or three if you count transient gigs.

But fortunately I have decided not to write an autobiographical piece, because it has occurred to me that there are exhibitions about to close about which I have not written because others have reported more than adequately on them. So since readers who can actually visit it have already read at least two excellent descriptions of the piece (both of which give away the surprise), I shall only remind you of the existence of Martijn van Wagtendonk's remarkable installation at MoCA GA: 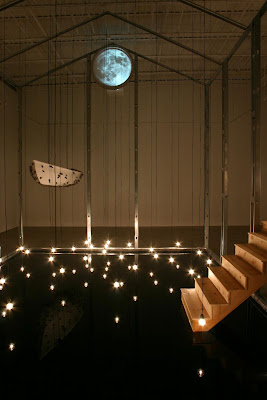 And those of you who do not reside in Atlanta and have no idea what I am talking about can comment and then I'll know who migrates over to this blog from the one to which I devote most of my theory and energy. Probably nobody except my two most faithful readers, both of whom know me personally and one of whom lives in Atlanta.

And there is some extraordinary work at Mason Murer (as I know from photographs and from the writing of others) that I haven't so much as seen because I seem to run out of time or out of energy before getting there. As locals know, I miss much simply because I am so dependent on hitching rides with others to openings that challenge my waning night vision.
Posted by littlejoke at 7:11 AM

I'm posting this again, because the other disappeared. Right.

Like I said, I know you read it. And nobody else will admit that they read it, or nobody reads it. Just as I always suspected.

Generic Viagra (sildenafil citrate; brand names include: Aphrodil / Edegra / Erasmo / Penegra / Revatio / Supra / Zwagra) is an effective treatment for erectile dysfunction regardless of the cause or duration of the problem or the age of the patient.
Sildenafil Citrate is the active ingredient used to treat erectile dysfunction (impotence) in men. It can help men who have erectile dysfunction get and sustain an erection when they are sexually excited.
Generic Viagra is manufactured in accordance with World Health Organization standards and guidelines (WHO-GMP). Also you can find on our sites.
Generic [url=http://viagra.wilantion.ru]Viagra 100mg pills[/url] is made with thorough reverse engineering for the sildenafil citrate molecule - a totally different process of making sildenafil and its reaction. That is why it takes effect in 15 minutes compared to other drugs which take 30-40 minutes to take effect.
[b]Generic Viagra Overnight Shipping
begining viagra dose
regalis vs viagra
shipping free viagra
how much does viagra cost
generic effexor xr
Viagra Pregnant Women
[/b]
Even in the most sexually liberated and self-satisfied of nations, many people still yearn to burn more, to feel ready for bedding no matter what the clock says and to desire their partner of 23 years as much as they did when their love was brand new.
The market is saturated with books on how to revive a flagging libido or spice up monotonous sex, and sex therapists say “lack of desire” is one of the most common complaints they hear from patients, particularly women.