The only thing worse than "last chances" being the notion of "neat things to look at around town." But one's formats, like the wording of one's headlines, are, or in those days were, decided by others.

Almost missing Gloria Ortiz-Hernandez, however, is all my own fault, but through March 28 you can still view the latest of her conversations with constructivism, at Kiang Gallery. (You should also check out next door at Sandler Hudson the utter emotional opposite of Greely Myatt's smart conceptual slapstick and Pat Courtney's emotionally engaging conceptual studies of pages from a miniature dictionary, but that is a separate essay, if ever written.) 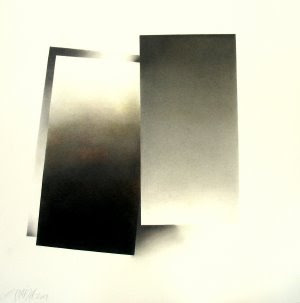 Ortiz-Hernandez actually refers far more to intervening decades of elegantly rendered geometric art, but the dizzying trompe l'oeil dimensionality of the new work puts me more in mind of the original Russian constructivist Liubov Popova than ever.

I wish I had the financial capacity to fly to London and compare the magisterial Popova and Rodchenko show at Tate Britain, but fortunately we can look at that show online, room by room. See Tate Britain's website for that; and you can see Kiang Gallery's website for an overview of Ortiz-Hernandez—who has actually produced a work of sculpture for this exhibition in addition to her usual drawings. Some of the works on paper incorporate color, and the gallery description of its use as "almost penurious" is poetically accurate and utterly memorable, though I would stick with "sparing" and "understated" as blander adjectives, myself.

Hagedorn Foundation Gallery's new director Brenda Massie has given us "Changing Room: Women and Photography Today," a concept-based show that combines work by women artists with male artists who deal with objectification by, in one case, objectifying spectacularly and controversially, for totally opposite reasons.

I would enjoy writing about the whole show, had I not places where I need to be in ninety minutes. But the exhibition is uncommonly worth it, and deserves more than the short run it is getting. (Like the other shows mentioned in this post, except for Tate Britain's, it ends on March 28.)

Some of the artists are known from other galleries in Atlanta, most notably Melody Postma, whose uses of photo transfers for misleadingly nostalgic views of old-school objectification were recently on view in depth at Linstrum + Matre: 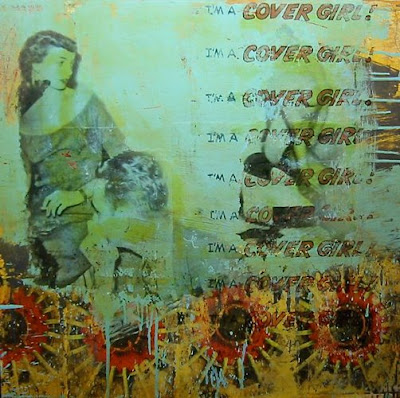 And of course, Susan Harbage Page is a known quantity of considerable distinction whose gender reversal of Andres Serrano's famous Klan portraits raises a whole set of subsequent issues through their allusions to female veiling and to the secret-society performance costumes from whom she lets us know the Klan took the shape of their headgear: 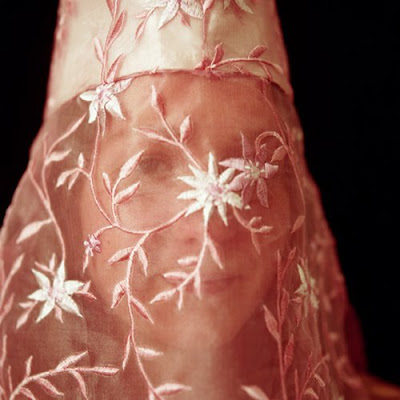 But it is Michelle Repici, who, for the record, I have never met, who is the real discovery of this exhibition. 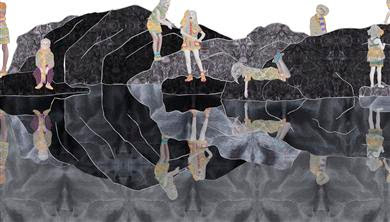 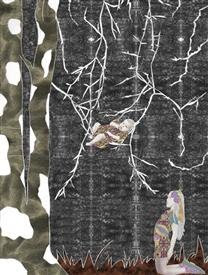 The simplest reason for this is the viewer's initial puzzled reaction of why this work is in a photo-based exhibition, since it appears to be traditionally drawn printmaking on rice paper with no photography in it at all.

Then one sees the faces that form very subtle photo transfers, as in Postma's work. But that isn't the end of it; in fact, it is scarcely even the beginning.

Repici actually constructs her prints digitally from the beginning, laying in scans of fabric and textures that we associate with classical printmaking. The incorporation of photographs is done so integrally that for once, we do not have the sense that we are seeing work that started with the photo. (This is not to denigrate that sort of digitally transmuted photography—but to discuss work that I like at other people's galleries would be insensitive, if not downright invidious. So I shall wait for the next exhibition of historically inflected neo-romanticism by one of the two or three artists whose strategies I have discussed previously.)

Repici is quoting old processes to great new effect. When the results appear on large sheets of rice paper, we are left with the feeling that we have seen the future.

One could and should discuss the history of collage and its transition to digital collage, as in the work of Repici's professor Lynn Wright, but I'll leave that for other writers to explore. There is a great deal of discussion to be had here regarding photography, digital art, traditional media, and the conversations and quarrels among them all. (See the preceding post regarding ceramics and consciousness and the history of both.)
Posted by littlejoke at 9:12 AM