not the same cities, but the same page and website: form and its contents

"Contents" as a multi-layered pun on "discontents."

See today's reviews in the New York Times of the Metropolitan Museum of Art's "Art of the Korean Renaissance, 1400-1600" (Holland Cotter: http://www.nytimes.com/2009/03/20/arts/design/20metr.html) and the Philadelphia Institute of Contemporary Art's "Dirt on Delight" (Roberta Smith: http://www.nytimes.com/2009/03/20/arts/design/20dirt.html) for some of the most thought-provoking meditations on form and its physical and psychological impact that one could possibly imagine.

Cotter's point is that Korean art during a brief moment of the "fresh dawn" that was the apt name of the Choson dynasty took on a freedom from class strictures that resulted, at its best, in "fantastically zany" stoneware that looked "squashed and bashed, [its] glazes slathered and spattered on": 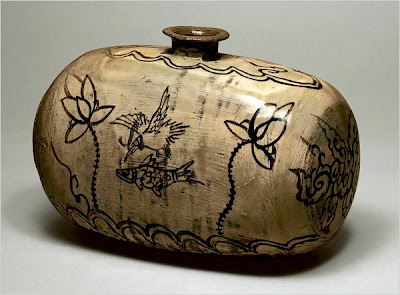 Which stood in stark contrast to the characteristic elegance of other vessels: 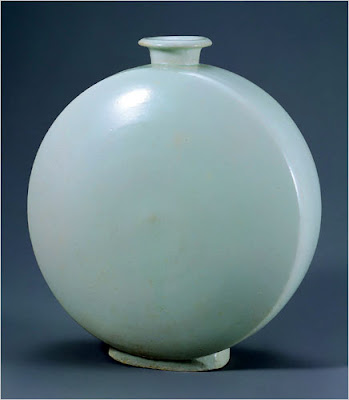 Now, it just so happens that Roberta Smith's review of the survey of ceramics from the past century or so raises not dissimilar aesthetic issues. (Neither Smith nor Cotter spell them out, but those of you who have been reading my last few posts can at least ask the right questions as to what they might be.)

George Ohr is the American prince of the squashed and suggestively splattered, for example, though he is represented by a piece that is, ironically, less true to his spirit than a vessel by one of his contemporary successors, Kathy Butterly: 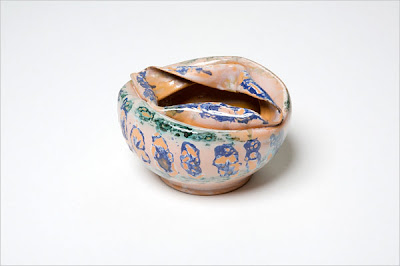 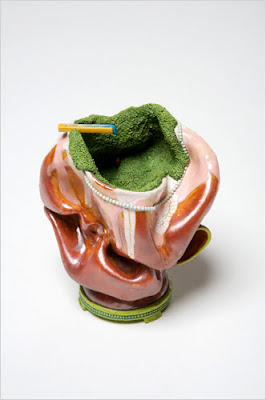 Smith argues that painting and sculpture have found their way into ceramics so systemically that it is difficult to maintain the art/craft distinction, but that the medium itself "has one of the richest histories of any medium on the planet."

A perusal of the Korean vessels (I've left the paintings and sculptures quite out of the discussion for purposes of brevity) ought to support Smith's contention without having to adduce further evidence.
Posted by littlejoke at 12:25 PM