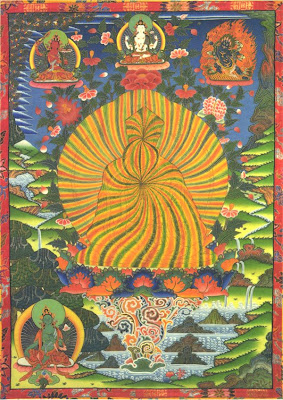 Now that I (hopefully) have your attention, it has occurred to me that one reason Counterforces seems to have the overall lack of impact that it does may be its tendency to range all over the map, quite literally; one is equally likely to read posts about exhibitions in Estonia as in Atlanta. (Not that I am going to any of them, the ones in New York and Philadelphia included, but in the digital era we can see immediate reproductions of just about everything, including the rainbow body of Padmasambhava.)

Anyway, I wrote more comprehensively on the joculum blog about the appearance of Saskia Sassen, lecturing on urban theory, the night after the visiting Tibetan painters from Dharamsala participated in a panel about thangka painting (on which another panel member discussed the rainbow-body variety of thangka, though not the specific one shown here). Then last night the major players in the Emory-Tibet Science Initiative discussed the issues involved in teaching science to Tibetan monks.

The disjunctures multiply. It's all just part of life in the big city. But some big cities are less used to be the multiplicities and disjunctures than others, and in the age of late globalization (a term I have just now made up for the era that began circa 1999) there are more of them, the cities and the disjunctures both.
Posted by littlejoke at 7:48 AM

The ranging is a nice change of pace from those legions of blogs that solely document daily goings-on within living rooms and cubicles.