theory and practice in history: or, the many uses of art

What got me started on my theory-laden post about the Under the Sea Imax film was the thought that Salvador Dali would have gone completely mad (thus eliminating what he famously said was the only difference between him and a madman) had he been given the possibility of incorporating the film into his "Dream of Venus" pavilion at the 1939 New York World's Fair. (Dali, in those halcyon months preceding the arrival of apocalypse, was decidedly keeping calm and carrying on.) The Freudian uses of underwater motifs as a metaphor for the unconscious and specifically for the doings of unconscious sexuality were a major guiding principle of Dali's enterprise.

And the oddity, as I've said, is that reality is so Freudian in the way that evolution designed things that were never intended to be seen by human eyes at all.

By contrast, Dali's undersea fantasias were as human-scaled and -sized as you can get; see Ingrid Schaffner's Salvador Dali's Dream of Venus: The Surrealist Funhouse from the 1939 World's Fair.

Now I see that UCLA's Hammer Museum is producing an exhibition of prints called "The Darker Side of Light: Arts of Privacy, 1850-1900," devoted to the uses of etchings by academics, realists, impressionists and symbolists alike. The medium tended to lend itself to psychological intimacy, since the small scale was ideal for contemplation-inducing subject matter, meant to be studied in seclusion rather than hung prominently in public rooms for the admiration of visitors.

The melancholy tone of the works in the Hammer's upcoming show make them a natural for studying the problematic behind the transitions from romanticism to neo-romanticism, which has stayed neo- for far longer than romanticism ever stayed originary.

However, I'll leave to one side the vexed question of the long transition of the neo-romantic imagination, which seems to be born anew in each successive generation. The transitions of the nineteenth century 1850-1900 were only the beginning.

For now, a couple of preliminary peeks at Félix Bracquemond's 1854 The Raven and Edvard Munch's 1895 Moonlight; scholarship and reflection to come later: 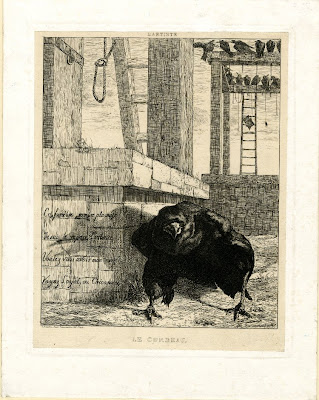 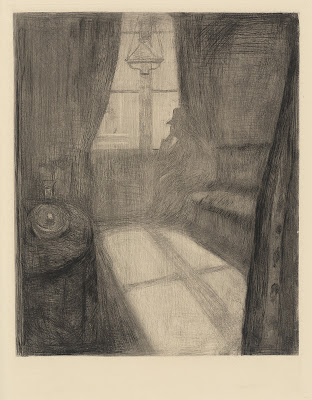