EUX.TV reports that Ai Weiwei's tower of Chinese doors at documenta 12 has collapsed during flooding on site.

The tower, constructed of old doors salvaged from demolished Qing Dynasty buildings, seems like a logical extension to photographic memorials to the lunacy of development in today's China, wherein history is being bulldozed at an extraordinary rate.

It seems even more appropriate that nature should have put the kibosh on the effort to memorialize what has been lost. If the developers don't get us, the storms of global warming will.

Sunday’s NY Times brings news from the Venice Biennale of two Swedish artists who, stung by the absurdity of living in a country that still had a king, declared themselves the kings of all of the world’s indefinite boundary zones: wherever there is territory in between the definite borders, wherever the boundaries are blurry, there is their kingdom. And there are many places on earth where it is agreed that it is a very bad thing to be caught on the wrong side of the border, but neither side can agree on the exact location of the boundary line. In that hazardous blur of turf, these artists rule.

Their kingdom also has a very large population, since anyone who is dead is automatically made a citizen, with the option of applying to be removed from the citizenship roster if they find it offensive.

They offer passports, but I don’t think I can be a triple citizen as well as a dual one. I already hold an NSK passport, offered to all who wish to be citizens of the first artists’ state in time (rather than in space). NSK (Neue Slowenische Kunst) made their reputations in Yugoslavia when they won a Yugoslav government competition for a youth organization poster by copying the design of a Nazi youth poster. They later declared that Slovene independence was their most successful artistic project to date. Their passports bear (or at least bore) a valid sequence of numbers on passport blanks lifted from the Slovene passport office by an NSK sympathizer, which enabled NSK members to cross between Slovenia and Italy on NSK passports in the innocent days of a dozen years ago.

The United States doesn’t recognize dual citizenship, and the upshot of this is that as long as the dual citizen doesn’t attempt to re-enter the United States on the wrong passport, U.S. citizens can also be citizens of whatever other country will have them. I have friends who hold valid Irish citizenship (by virtue of ancestry) and E.U. passports in consequence. I probably shouldn’t point this out, since these days everyone is racing to defend the borders, but.

Another artist, who declined to acquire an NSK passport during their residency at the 1996 Olympics, said we would all be happy as NSK citizens until NSK started collecting taxes and calling up artists for the army. (Of course an NSK army would have to defend art in all times but in no place in particular.)

It would, I suppose, be a lovely conceit if the two kings of the interstitial kingdom sent letters to the warring powers who have been the primary creators of their indefinnite territory, demanding a demilitarized exclusion zone of at least a hundred kilometers on either side of the kingdom.
Posted by littlejoke at 12:43 PM No comments:

In one of my frequent firm grasps of the obvious, a brief perusal of the catalogue of the High Museum’s “Cecelia Beaux: American Figure Painter” exhibition reveals that her portraits were perceived as every bit as disturbing in the world of 1893 as they seemed to me when I discovered them on the walls a few weeks ago in this scholarly survey of a painter who has always been overshadowed by her male counterparts. (William Merritt Chase called her the most important female painter of her generation. But.)

My enthusiasm, then, is a naiveté comparable to realizing with excitement that Moby Dick incorporates a good deal of actual information regarding the hunting of large cetaceans. Only in this case the whales are psychological states, and the perceivers didn’t know they were hunting for them, only that something big was out there. 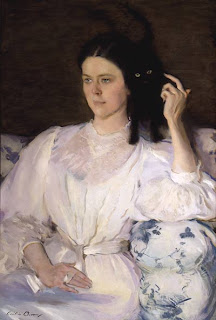 Sita and Sarita was as bothersome to American viewers of the 1890s as Whistler’s The White Girl, which Beaux would have seen, had been some years earlier. And many of Beaux’ other 1890s portraits, Dorothea in the Woods, et cetera, seem to reflect not just perceptive glimpses of feminine psychology that were missed by Beaux’ male counterparts, but intense personal attachments. Beaux knew these subjects’ inner lives, and it shows, but she also brought her own strong feelings to the enterprise.

Portraits in Summer, which I can find on the web only in a vintage black and white photograph, is another arrestingly unusual accomplishment; I wonder about its stylistic predecessors, since it almost seems to foreshadow later decades in its particular idealization of Beaux’ nephew and his bride. They seem to be facing their radiant future rather more resolutely than I would expect in an American formal portrait of 1911. I can think of a whole host of earlier Central European strength-and-beauty allegories (this was the age of that brand of bodily romanticism) but that is not where this couple is coming from, or going, either. Everything about the gestures and postures puzzles me, though not necessarily productively. 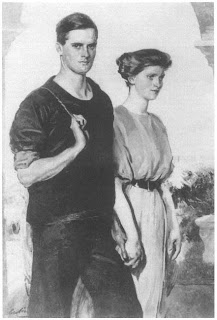 To use the fashionable term, Beaux is using some visual codes I just don’t recognize. Yet she doesn’t seem like the type to have self-importantly invented her own. She seems to have invested these portraits with a good deal of psychological baggage just because she understood her subjects so well, and put so much of them and of their relationships with her into the resulting artwork. Her formal portraits of military men and Unitarian ministers are as well-done but blankly unrevelatory as I, with a sense of anticipatory depression, would expect. These folks didn’t want their inner selves revealed, and they got what they paid for.

I am so self-evidently not an art historian that it is pointless to add to Sylvia Yount’s excellent study. But I wanted to attempt to get at what so arrested my attention when, by and large, the portraiture of that period in American history leaves me slightly worse than unmoved.
Posted by littlejoke at 8:01 AM No comments:

news from the neighborhood

This exhibition is opening at a gallery in metro Atlanta; apologies to those of you who may still be checking for my long-delayed (typically) further remarks on the 2007 Southern Open Biennial in Lafayette, Louisiana. 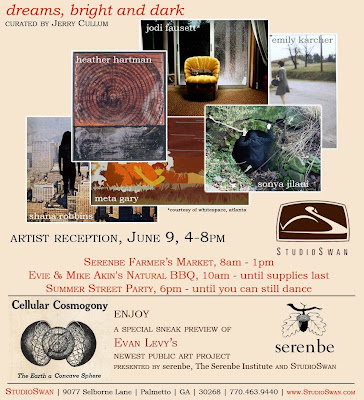 Posted by littlejoke at 10:11 AM No comments: