The Age of Earthquakes: In Lieu of a Review

The Age of Earthquakes: A Guide to the Extreme Present slipped into the global dialogue nearly a year ago now without much notice, in spite of being a three-person collaboration including a couple of intergenerational culture heroes of the artworld, Douglas Coupland and Hans Ulrich Obrist. Shumon Basar was the name I had to look up, which turns out to be embarrassing since something by him was published in the same issue of Art Papers that marked my return to writing for that magazine in spite of my misgivings about feeling completely out of touch. Self-illustrative intuition.

For persons of a certain age (okay, I really mean “for me”), the book is a vertiginous experience: it is so obviously an hommage to Marshall McLuhan and Quentin Fiore’s 1967 experiment, The Medium is the Massage: An Inventory of Effects. 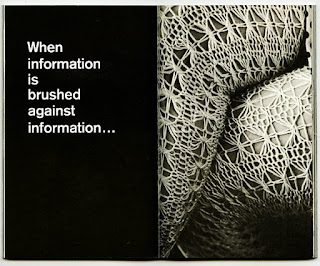 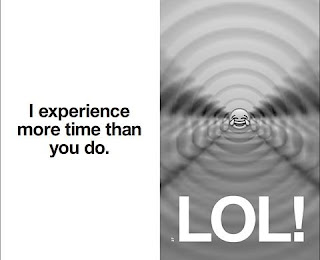 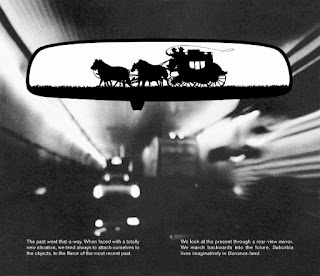 The Medium is the Massage was a book about the end of the age of the book, the rise of televisual media; and Fiore’s inspired design escorted the reader, or more accurately the looker, through McLuhan’s dizzying ideas and into the world in which he or she or ze or they already lived. It was above all a lovely physical object about a world that was increasingly immaterial, a labyrinth of moving pictures flickering on movie and television screens and sounds plus spoken or sung words conveyed through wired-up speakers and transistor radios.

I was so unsettled by the visual quotations in Coupland, Obrist, and Basar’s book that I Googled a PDF of The Medium Is the Massage and after being annoyed by the anomalous cover packaging of this digitized version of a later edition (the quintessential Quentin Fiore white-lettering-on-black cover was a key part of the experience—a book about a world of saturated-color images at metaphoric warp speed, in which all the images coming at the reader in fast-paced page succession were in black and white),

I settled into the irritating experience of seeing double-page spreads at what looked to be very slightly less than 100%. (I wasn’t irritated consciously enough to look at the top of the window and see if this was so.) I had scrolled through just enough to confirm my recollection of the startling quality of the original book when the remainder of the pages contained only the text “Whoops! Something went wrong and this page did not download.”

It was one of those glorious bridge moments between The Medium Is the Massage and The Age of Earthquakes that falls into the category of “You can’t make this stuff up.”

In any case, the latter book is also a vertiginous sensory experience, though perhaps twice as vertiginous for those for whom it brings back the experience of being a college senior and holding a book that tried to illustrate the weighty theory, only semi-intelligible, that Understanding Media had conveyed only a year or two before.

For one thing, The Age of Earthquakes is a sexy object. The American edition, anyway; the rainbow-sheen reflection of the silvery-inked cover recalls the cover of the monumental exhibition catalogue for a turn-of-the-millennium show, which show I cannot quite remember, and I am not going to put down the laptop and go hunt for the catalogue. An image search of keywords didn’t reveal the name of it.

In any case, the heft of this little book is quite remarkable; the trio of authors obviously put considerable thought into the weight of the paper stock, because something that looks as if it should be feather-light is quite substantial, in a size that fits the hand. (Again, in the American edition, so I am basing my supposition on inadequate information; but the American hard-copy edition was published three weeks prior to the British hard-copy edition, which I have seen only onscreen—again, at less than 100% of the page size of the physical object. The onscreen preview of the American print edition is more than 100% on my laptop, and each page needs to be scrolled down to see all of it. Interesting…)

Having belatedly discovered the book in late 2015 through the Douglas Coupland page on Amazon (I somehow missed Art Papers’ March 7 Facebook post congratulating Basar on its publication), I am particularly amused by the page spread updating Jenny Holzer’s truism: “Protect me from what Amazon suggests I want.” 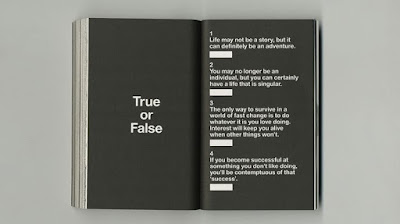 This is why I am far more forgiving of the book’s possible flaws than are the reviewers I’ve read thus far online. ARTnews senior editor M. H. Miller takes the authors to task for offering two contradictory opinions about the Internet a few pages apart, even though one of them is more or less documented and serious and the other is obviously written as the kind of preposterous opinion that people write in Facebook posts at three o’clock in the morning—drunk Facebooking being one of several updated social-media versions of drunk dialing.

Miller calls out our boys for the egregiously unfortunate bad timing of a page that reads, “Rodney King was the YouTube of 1993. If it happened today would it be able to compete with everything else?” Although (as Miller admits) the book was on its way into print before the succession of viral iPhone documentations of police brutality, Miller points out that not even the chronology in this remark is correct: Obrist/Coupland/Basar are remembering the year that the Rodney King video was incorporated into the Whitney Biennial, not the year it first burst into public consciousness, which was 1991. In fact, Spike Lee had already used it in the title sequence of Malcolm X in 1992.

I had failed to notice the erroneous date, but it seems to me to resemble the systematic misinformation with which I am bombarded every time I open Facebook. This species of self-confidently wrong and questionably grammatical meme shows up more times per day than I am capable of guessing an average number for.

I might find a book reviewer who gets the point if I kept scrolling through the Google results, but three reviews into the process, I am flabbergasted at how much the reviewers hate the book, and how much they seem incapable of understanding a book about being “smupid” that is so illustrative of its own premise that at least some of it has to be deliberate, even if some of it is just the usual phenomenon of being unable to see our own blindness. (The condition of “smupidity” in which the digital present leaves us is complemented by “stuartness”—the one being “smart+stupid” and the other “stupid+smart.” The book is both at once, or at least in quick succession, which is part of the point. One reviewer wrote, if I remember rightly, “If I wanted something that looked like the Internet, I’d go to, uh, the Internet,” and another wrote “I read books to get away from this kind of shit,” which is so unendurably thickheaded that I would have thrown the review across the room had it not been on my laptop screen, making it a bad impulse to which to succumb.) 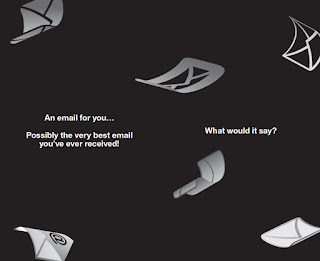 The pacing of the book makes visible and forces into awareness all the onscreen phenomena with which we are too familiar to bother to reflect upon them. This is a longstanding practice in experimental literature and design, and I cannot believe that book reviewers not only for a major West Coast newspaper but for a venerable art magazine should be so incapable of comprehending this book’s place in that equally venerable history.

The Age of Earthquakes is annoyingly smart-ass and conceptually smug, but that comes with the territory of being part of the artworld, and should be discounted appropriately. I like the moments in which it shakes up my perception more than the moments in which it reminds me of how insufferable a place the artworld really is. (One reason I usually just sit here with my books and my laptop until an art object comes along that makes me want to interact with it in spite of the insufferable social environment that surrounds it.) 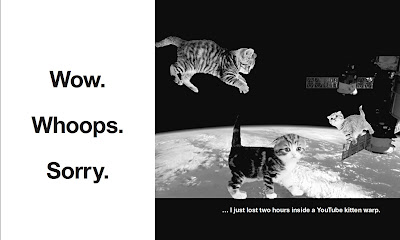 Too bad nobody who has had it dumped on their desk as a review copy had their perception shaken as a result. Are even senior editors of art magazines what the McLuhan generation called P.O.B.’s? It is quite significant that the many, many definitions of that acronym in an online urban dictionary do not include Print-Oriented Bastard.

...Okay, update at 4:32 a.m. on December 5, as I go in quest of images to add to this post: Shumon Basar's interview at http://www.thedoublenegative.co.uk/2015/03/the-age-of-earthquakes-a-guide-to-the-extreme-present/ offers a linear, highly intelligent disquisition on the themes of the book, along with the name of the man who probably made those decisions about the paper stock and page size (although I wonder who decided on the radical disparity

between the covers of the U.S. and U.K. editions).

Although his name does not appear on the front cover, Wayne Daly is this book's Quentin Fiore. So now you know.

Posted by littlejoke at 3:13 AM No comments: