Sometime in the past couple of weeks I marked, or more accurately did not mark, the 25th anniversary of my first day of proofreading at Art Papers. Thank you, Xenia, though you should have been thanked back in the spring when the 25th anniversary came round for my first published piece of art criticism.
Posted by littlejoke at 2:06 PM 2 comments:

too late is not better than not at all 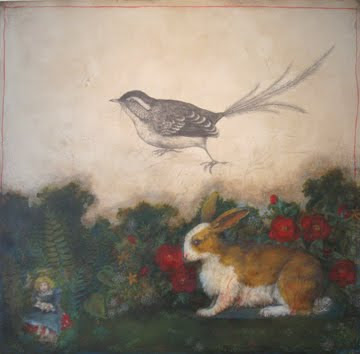 I have been meaning to write about the problem of exhibitions that cannot be adequately represented online by images. Holle Black's just-closed show at Sandler Hudson is a case in point: the image of Alice here looks insipid if you can't see the faint drawings in pencil and the very thin lines of paint that enliven the basic composition and make it into something quite other than what this photograph only appears to reveal.

If I had had more intelligible notes earlier I might have been able to do something to rescue the situation. As it is, it is a reminder that when it comes to 72 dpi images of paintings, what you see is what you get, but is decidedly not all there is.

Since galleries cannot afford the high-tech magnifications that museums can post that show more detail than the viewer in the museum itself can see, I am not sure what the solution to this except better online art criticism.
Posted by littlejoke at 2:02 PM No comments: 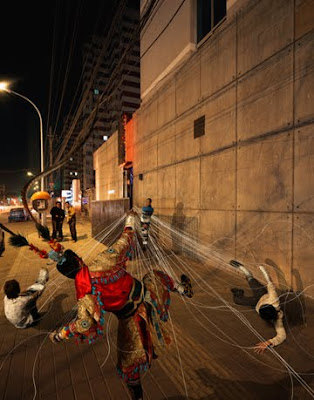 When I was an undergraduate back in the Early Pleistocene, the junior-year Asian Studies course everybody had to take included Arthur Waley's translation of Monkey, extracted from the monumental Chinese novel The Journey to the West. The novel is an episodic adventure based on the real-life journey of Hsuan Tsang (here known as Tripitaka) to India to acquire and translate the Buddhist scriptures that were lacking in China when the religion was first introduced.

This setup allowed for the invention of traveling companions and hazards that were the distant ancestors of the genres that evolved into today's Chinese action flicks.

I subsequently spent years wanting to know more about the real Hsuan Tsang (Arthur Waley's book on the topic was unavailable to me in those long-gone pre-internet days) and forgot about Monkey until my friend from college Larry Schulz translated the sequel novel The Tower of Myriad Mirrors, which had been written during the Ming Dynasty to explain how Tripitaka's ill-tempered companion the Monkey King could attain enlightenment while violating every credo of the Buddhist canon in his furious protection of the traveling monk.

This long digression explains why Larry and I are supposed to be among the discussants at 2 p.m. Saturday Oct 17 at Kiang Gallery, regarding Chi Peng's 21st-century photo update of The Journey to the West.

This much-discussed young Chinese artist has digitized satirical comments on today's journey to the West, with elaborate set-up scenarios in which Buddhist dialectics have been replaced by The Matrix (which of course is a Buddhist-inspired movie also dependent on the tropes and genre conventions of Chinese action flicks) and the internet has become the web of conditioned origination in which the commodity fetish...just as Marx said it would...no, actually, I'm writing nonsense just to be mischievous, which is much in the spirit of Chi Peng's brilliant digital and thematic manipulations.

If you've seen one, you haven't seen them all, because the visual sources that are transmuted vary from the conventions of scroll painting to the conventions of moviemaking to...well, go and see.
Posted by littlejoke at 7:06 AM No comments:

also not for my profit, except indirectly

Those within easy driving distance should contemplate patronizing Café Cliche, in the downtown Decatur building formerly also housing Little Azio. Not only is there considerable free parking (especially now that Café Cliche, which sells pastries and sandwiches, is the building's only tenant) but the ambiance is pleasant and I am often the only customer.

A reasonably priced wi-fi spot with available seating is a terrible thing to waste.
Posted by littlejoke at 2:30 PM 3 comments:

shameless self-advertisement, but not for profit

Carol LaFayette's 2003 video based on my poem "Skateboarding in Sarajevo: Prelude to an Ordinary Evening in Atlanta" is finally up on YouTube after being effectively out of distribution as a DVD for a couple of years. It pleases me that on YouTube in 2009, this meditation on the 1990s war in Bosnia and the 1860s American Civil War with which Atlanta is associated via the Cyclorama and Gone With the Wind appears alongside a number of recent videos of actual peacetime skateboarding in Sarajevo, unlike the Sarajevans' skateboarding past snipers that gave my poem its title.

Also posted at http://www.vimeo.com/6837107 where the E. K. Huckaby cover design of the limited-edition DVD is reproduced.
Posted by littlejoke at 1:51 PM 1 comment:

This Museum Is My Proof: A Meditation for the Month of Atlanta Celebrates Photography


Duane Michals’ This Photograph Is My Proof was one of the quintessential postmodernist documents of the first wave of conceptually inclined picture taking.

If you recall, this 1974 photo with text asserted that the photo accompanying the impassioned scrawl was proof that things had once been “still good between us…see for yourself!” But the photo theorists taught us that maybe the whole scene was a pose, and the earnest handwritten plea might be a manipulation that is part of the whole fiction woven around what we regard as solid evidence…. (Or it might be totally the sincere outpouring of some goof for whom the photograph really is, as in the Ringo Starr song, “all I’ve got.”)

In Atlanta, Robert Stewart had gone with the other end of the proof-positive department, creating “nude self-portraits” that consisted of nothing but a block of text describing in detail the scene in front of which he was supposedly posed nude as he took the picture we could not see.

The two poles of photo-trustworthiness and storytelling in word and image ultimately spin off, in one sense, from André Breton’s photo-illustrated novel Nadja, where the photographs are certainly proof of something, but we cannot quite be sure what, even though we know the real history behind the novel (or, after the efforts of many biographers, we believe we do).

And this led to a spate of non-graphic novels with photographic accompaniment, from Umberto Eco’s The Mysterious Flame of Queen Loana to Jonathan Saftan Foer’s Extremely Loud and Incredibly Close …a transient trend about which I meant to write back in 2005, and, because it was a pre-blog time for me, I did not.

Now we have the fascinating example of Orhan Pamuk’s 2008 novel, newly translated by Maureen Freely. And Pamuk, as always with his extraordinary novels, exemplifies a trend that has scarcely even been identified as such yet.

Although regional folks including a certain guy in Tennessee were creating fictional museum displays decades before they were internationally cool, the tendency to make up documentation of non-existent events has lately become a veritable obsession.

In the case of Pamuk’s The Museum of Innocence, he is said to be creating an actual museum of Istanbul paraphernalia that corresponds to the museum through which his narrator is leading the reader as he tells his story.

But there are no photographs of the displays in this novel. As in Stewart’s self-portraits, words do the job.

And yet there will supposedly someday be real physical objects to look at, in Istanbul, presumably at the spot shown on the map in the novel. Pamuk already cancelled a preview exhibition at a museum in Germany thanks to delays in publication of the novel, so those of us who read news stories about such things have been waiting for this museum almost as long as the good people of Istanbul have.

News reports say it will open in 2010. In the meantime, the museum, like the novel it does not illustrate but exists alongside, constitutes the latest chapter in a long history of interchanges between images, objects, and words.