I am pondering anew the issue of conflict of interest when one has been sent on a press trip from which one derived much in the way of insight and much information that ought to be shared with the planet at large. This all took place last August, so neither the Glenfiddich distillery, their artist in residence program coordinator, nor the parent company William Grant and Sons will feel too greatly excited and pleased if I finally give up and post my dubiously profound reflections on this web journal.

Romeo Alaeff, of whom I have written at least a little on my joculum.livejournal.com blog, is a genuinely extraordinary artist (in other words, I think his art and his biography fits into the transculturated perspective that constitutes counterforces). So I need to have another go at writing something systematic about him and finding a place to present it that is a larger forum than the counterforces web journal.

"tk" is old-school journalese for "to come," presumably with a "k" to make it easier to search and delete the term, though "tc" would work just fine for that purpose also if the searcher puts spaces before and after. (Otherwise the "replace" function will replace or delete every occurrence of the letters in the middle of words.)

I have several exploratory essays that involve the Glenfiddich story, actually. So you may get more than you ever wanted to know about the metaphoric possibilities of single-malt Scotch and international artist programs in the age of globalization.

Or, of course, you may not. But you have been warned.

There are remarkable tales left lazily untold; or perhaps I have just been waiting for all those editors from months-ago queries to tell me they are not interested, when in fact I know that in the artworld, silence equals not death but a polite "thank you, but no." though often it just means "thank you, but my inbox ate my homework."
Posted by littlejoke at 11:55 AM No comments:

Attentive readers will realize I face the odd conflict of interest of writing in praise of a show that includes a work of art that depicts me.

However, I cannot afford to buy it, and have not been offered it as a gift (which I would not accept as a matter of principle), and the Cofers have not attempted to bribe me with extravagant trips or offers of money so I would assume that ego is the only factor involved.

—which it always is. In all times and in all places.

And that brings me to the reason why I feel that "Learning to Love the Species" is a remarkable exhibition (at the UGA Broad Street Gallery as mentioned heretofore).

Cofer creates allegorical artworks that tend to fall between accepted categories for artmaking. Her papier-mache portraiture (can't be bothered to insert diacritical marks, sorry) uses a medium more often associated with craft projects. But she is a consummately skilled and careful worker in conventional media, so if she uses papier-mache, it will be for the creation of a complex, intelligent, and well-crafted artwork.

And it is the type of complexity that interests me most in terms of the expressed preferences of this Counterforces weblog, which at its best is devoted to the presentation of unfashionable alternatives to the contemporary art dialogue, but to ones that raise substantive intellectual issues. (Or, in the case of Glen Baxter, that make fun of polenta.)

Cofer's spinny choice of title illustrates her perspective: in a show devoted to the facts, foibles, and fantasies of individuals, it is the species alone that gets star billing. There is a reason why she and I were early-adopter readers of E. O. Wilson's approach in Consilience (whether or not we agreed with Wilson's conclusions) and why both of us like some of Tom Stoppard's plays (regardless of what we think of them as intellectual documents or as artworks). Cofer is a playfully big-picture sort of person, tempering aesthetic sensitivity with acerbic wit and refining abstract intellectual perceptions with a strong sense of irony and capacity for visual metaphor.

Her diorama portraits of the mostly rich and putatively powerful (I am the exception to both) are created according to visual metaphors that occur to Cofer, not ones that they themselves pick out. The results are complimentary on a deep inner level—she sees what's up with people and accentuates the positive without altogether eliminating the negative, and sometimes messes with mr. in-between.

So it takes a certain amount of nerve mingled with intrinsic trust to agree to sit for a Cofer diorama portrait, because you never know what kind of company you will end up keeping when the whole scene appears to your wondering gaze. All you know is that it will tell you something about yourself that you either did or did not know.

Whether or not they liked the details, I have never heard anyone say openly, "That's just not right!" As with the interpretations of Hermes, the truth that is told may not be the whole truth, but Cofer does not claim to be the Delphic Oracle either in her breadth of comprehension or her ambiguity. She claims only to be making art based on extensive research into what the subject has chosen to make available, plus whatever else that might suggest.

And as we know from biographies of all sorts, even carefully mapped trails can lead in all sorts of extraordinary and scarcely expected directions.

So when I finally read High Museum of Art curator Carol Thompson's catalogue essay about an exhibition in which I share wall or pedestal space with Cofer's husband Carl, ex-congressman Wyche Fowler, Sir Vidia Naipaul, New York Review of Books co-founder Robert Silver, and a redoubtable range of legendary art patrons whom I will not here name for fear of offending those left unnamed...when, as I say, I read the essay at long last, I expect to be informed and stimulated by a range of vision that is seldom encountered in this era of excessive specializations.

We can be grateful for the existence of Cofer's inexhaustible imagination and curiosity about the world we live in (as well as the one in which some of us don't).

And those of you who read Counterforces regularly and live within driving or flying distance of Athens, Georgia can go hear Ms Cofer deliver a gallery talk on Thursday evening, April 17, 2008 but you will have to visit the University of Georgia website to find out the details, for I can't be bothered to clutter up my posts with things that would require yet another Google search.
Posted by littlejoke at 11:21 AM No comments:

actually, the show is already open in Tallinn if you're headed in that direction 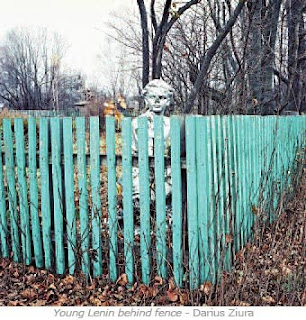 The Continental Unconscious and Finno-Ugric ethno-futurism are fully explicated in the long essay to which the previous link directs you.

The accompanying photographs by Darius Ziura reveal, among other things, utility stores named Faith, Hope, and (though you have to wait a very long time as the article unfolds before you see it) Charity, or Love as the new scriptural translations have it. 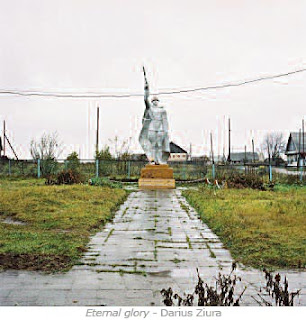 Posted by littlejoke at 1:34 PM No comments:

coming soon to a gallery near you, if you happen to live in Estonia

The ultimate Counterforces exhibition, and I had nothing to do with it. Description from Eurozine and the longer original statement is here: http://www.eurozine.com/articles/2008-03-17-kreuger-en.html

"The periphery of the periphery: Anders Kreuger details his research for an upcoming exhibition in Tallinn in the spring of 2008. He is focusing on contemporary art and culture of the "Finno-Ugrian world", peoples united by their language group across the Republics of Mordvinia, Udmurtia, Mari El, and Komi. When Kreuger suggested the topic to his colleagues in Estonia they were not immediately positive: Why spend time in remote places seen as the periphery of the periphery? By visiting those "unknown but not exotic" places, Kreuger hopes to "undo some of the repression and self-repression that has pushed these peoples underground, and also illuminate possible meanings of the Continental Unconscious.""
Posted by littlejoke at 1:18 PM No comments:

coming soon to a gallery near you, if you live in athens, georgia 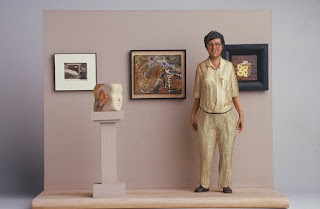 Susan Seydel Cofer's "Learning to Love the Species" is the first-ever presentation of all of her remarkable diorama portraits of personalities from V. S. Naipaul to yours truly, with more significant and superbly crafted stops at more movers and shakers in Georgia than you can shake a stick at.

If I had been wearing my signature raincoat instead of summer gear made up of my old writings from Art Papers, I think this portrait would resemble Peter Falk, but no one else thinks that.

The miniature artworks are by Frank Hunter, Maurice Clifford, E. K. Huckaby, and, I believe, Susan herself, but more likely there is a sculptor whom I am forgetting. My bad, as apparently they used to say. (Would somebody enlighten me as to where this season's "I has" comes from? I has art opening.)
Posted by littlejoke at 2:44 PM 1 comment: