Recontextualizing Andy Howell, or, How Can I Make This Essay Sound Even More Unappealing Than It Already Is?


My chief professional distraction from practicing intellectual history and exploring the condition of consciousness studies consists of the need to visit more or less non-mainstream galleries, in search of two-hundred-word writeups for the entertainment section of the daily print medium.

I have, for years now, been slightly baffled by the question of where such an obviously coherent alternative aesthetic came from, in terms of skatepunk, hip-hop visuals, and many assorted other movements that are associated with, but not really part of, the greater Lowbrow movement.

Few things are more annoying to would-be art historians than art movements whose history has not been adequately chronicled. And this set of them seems particularly under-researched.

So imagine my surprise when I finally discovered, on perusing the interview with Andy Howell in the June 2008 issue of Juxtapoz, that a significant part of this international aesthetic was birthed in Atlanta circa 1991 when skateboarder Andy Howell got to know hip-hop artist Lil Jon, who worked at Skate Escape.

Howell says that in 1991 he was “fusing Sesame Street beats with GI Joe music and adding punk beats and making this weird hybrid that ended up sounding like carnival hip-hop with ADD.” Which beats all hollow the kind of cultural fusion that James Clifford was then recording in anthropological circles, but who knew?

The cartoony creatures crawling across the iconography of this mash-up (before we learned to refer to hybridity as mash-up) were enough to keep the uninitiated at bay. Heck, we hadn’t quite picked up on “hybridity” yet, even if Les Magiciens de la Terre in Paris and New York’s three-venue extravaganza The Decade Show had cued us in to the possibility that there were more ways of putting the pieces together than we had previously thought.

Paul Gilroy’s The Black Atlantic was still a couple of years away, Cornel West was still pretty much doing liberation theology coupled with deconstruction, and nobody, but nobody, was noticing the creative output of guys working at skate shops in Atlanta, Georgia.

And, Howell testifies, the birth of the politically minded Zero Sophisto came about in this wise: “Zero Sophisto started as a reflection of Atlanta and us all skating the city with everyone in our crew. Skateboarding was universal. All sorts of different races and cultures together, and in the middle of Atlanta? That was an anomaly. …I started drawing graphics with crayons for clothes to make it appear as if all these political statements were coming from a kid writing them on the street in the middle of the city. I wanted to show that this new language, which I called Zero Sophisto, was being created by kids with skateboards and paint cans.” [p. 64 of article cited below]

And in the fullness of time Mary Jane Jacob brought the globally approved version of public and political art to town for the Cultural Olympiad, and meanwhile a whole movement remained underground in spite of all the declarations that “the underground” was, like, so over.
It was, but apparently the systematically overlooked was not.

And outsiders could peruse all the near-illegible little magazines (literally little…a friend remarked that the type on the tiny pages was too small to be read by anyone over thirty), and still have no clear idea what was going on. Graffiti continued as it had for decades (and still continues, wild style and the rest being some thirty years old this year), but the other meldings and fusings and gatherings-up were something else entirely. Except when they weren’t.

Howell, of course, didn’t come out of nowhere. “New York influenced me a lot. … The hip-hop kids in NY were really looking across the club at that point [“between ’89 and ’92,” he says elsewhere] and kind of nodding to the skate kids. There was no crossover, just a mutual respect creatively. It was an infant scene at the time of hip-hop kids, skaters, and street artists. It was even smaller in Atlanta at the time, but there were a group of us making beats and skating and writing graffiti. Of course my graffiti became skateboard graphics, and then started getting into some of the original art shows at Alleged Gallery on Stanton and Ludlow.” And the Atlanta music scene was birthed “even more underground, and just dirty and raw like the South was at that time. Jon actually branded the ATL sound in a way with Crunk.” [p. 67, op.cit.]

All of which would find its way, distorted and in pieces, into the mainstream media with terminology that now functions as a set of marketing tools. But there were Howell and Jon, out in front without quite intending it, and Shepard Fairey remarks admiringly, “Seeing the connection between music, skateboarding, and art, and seeing how you took creative control of the cultures you were participating in was always something that was huge for me. Especially how you were one of the first people to really embrace graphic design intertwined with illustration. You seized the coming of digital media and art really seamlessly.” [p. 67 of “You Will Be the Guest of a Gracious Host: Andy Howell interview by Shepard Fairey, Lil Jon, and Evan Pricco,” Juxtapoz vol. 15, no. 6 (June 2008), 58-73.]

On page 64, the large quote, which is all some people notice while they look at the pictures, reads “For me everything culturally, artistically, and even technologically has merged.” And it has, for sure.

Now, my actual point is fairly elementary. Howell addresses his interviewers thus: “Jon, you never thought you were going to create a new genre of music when you were listening to punk and skating; Shepard never expected to inspire a wheatpaste and stencil movement when [he] first put up those stickers in Providence; and I never thought I’d help influence the fusion of art, skateboarding, and hip-hop culture when I was rapping in my high school art class. We all ping-ponged ideas off each other over and over again, indirectly at times, which is how popular culture evolves.” [pp. 67, 70]

Well, actually, that’s how culture evolves in general, as anyone who has ever put together a collaborative art or performance piece or work of scholarship can testify. And there are loads of theoreticians whose insights could be applied to understanding the history of all this stuff.

But first somebody has to wade through enough issues of Juxtapoz to do it, and that will require a Ph.D. candidate who grew up with the stuff instead of being turned on by the idea that there were the Cantos and The Waste Land to be had instead of the Top 40 rock crap on their smalltown radio stations. It will require somebody who grew up on the far side of the dissolution of the old high-low distinctions and somebody who likes low and high together from the times before.

Rajni Shah's dinners with Americans (a fair number of Atlantans in particular) were used as raw material for her Dinner With America performance piece in the United Kingdom, which has gotten a significant review that should be of interest to those Atlantans who recall Shah's long residence here, and to those readers who just want an insight into how one culture takes an unconventional look at another: 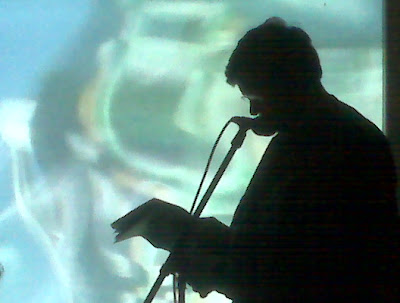 "The Gnomon Show" at Railroad Earth on Saturday was apparently unattended by any of the blogging public, so I shall self-advertise that the multimedia combination successfully re-invented the Chautauqua for the twenty-first century, though whether the genre needed to be brought back is dependent on whether anybody had missed the notion of live performance combining lecture, poetry, video, digital images, and sensory overload with ideas tacked on as an essential component, the paradoxical combination being essential to the nature of the Chautauqua in a time in which live performance is an anachronism pursued only by obsolete hipsters and antique elders, for opposite but possibly equal reactive reasons.
Posted by littlejoke at 10:22 AM 1 comment: