Nature, Nostalgia, Nepotation, and other expressions of the new at Mason Murer

“is art the joke or the punchline?”

Thus does Jess Snyder complete his artist's journey round the room, making art under the names of three personae in the “Nature, Nostalgia, Nepotation: Deborah Landry, Alessandria Mucciaccio, Jess Snyder” exhibition at Mason Murer Fine Art through May 6. Snyder is the “Nepotation” part of the University of West Georgia’s Atlanta Gallery Project Award Exhibition.

Snyder offers faux naiveté done right; anyone who has tried knows that it is hard to make work look awkward and amateur and visually successful all the same time. It is hard enough to make genuinely naïve work that doesn’t look klutzy; much of the time, it is hard enough to make sophisticated work that doesn’t look klutzy. Snyder pulls it off. These drawings and poignant parodies of wall texts combine grace and representations of the success of failure as much as the falling tightrope walker who appears in the one of the pieces inspired by metaphors of the circus.

Deborah Landry’s engravings, especially “Vision to Behold,” are lovely, haunting evocations of the mystery and majesty of the forest when it is left to its own devices. Her wall of ceramic models of clear-cut tree stumps, “As Far As the Eye Can See,” reflects the devastation that follows when it isn’t.

Alessandria Mucciaccio deserves to be celebrated for sheer imaginative range carried in unanticipated directions. Her encaustic wall sculpture of a female nude, inlaid with Greek text and butterflies, may or may not succeed by conventional standards, but it pushes the boundaries between genres productively as much as it stretches customary symbolism in personal directions.

The adjacent “Fresh Blood” exhibition of emerging or under-recognized artists, organized by Mason Murer itself, should be seen by anyone within comfortable driving distance. I hope to deal with this one a bit more in a post in the near future, but Yana Dimitrova’s “Melancholy I” and the adjacent melancholy painting of a sofa covered in clear plastic would be worth the price of admission if admission were being charged, which it is not. (I used that joke in a previous post, but if a joke is worth making, it is worth running into the ground.) Alli Ferrara shows us how abstraction and representation ought to be combined in the twenty-first century, much as the late Genevieve Arnold’s retrospective at the Museum of Contemporary Art of Georgia demonstrates one way in which it could be done in the now definitively terminated twentieth. There are so many other pleasures of painting and sculpture (but not, alas, video or other new media) to be had in this exhibition that it deserves an extended analytical review, whether or not it ever receives one.

With luck, I shall eventually refine these notes into something more formal, including discussion or at least description of a few more artists. Until then, I would like to point people in the direction of this show before a few random images on people’s websites become the only way to appreciate it.

If the link works, this should be Yana Dimitrova's "Melancholy I" as it appears on her website: 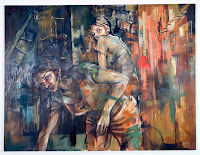 Posted by littlejoke at 4:49 PM