mostly cross-posted from joculum, with annotations 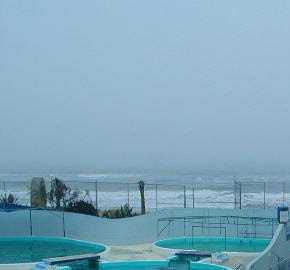 the hip, the historic, the horrible

NOTE: In lieu of the majority of the illustrations, which can be found on joculum.livejournal.com, I am adding the annotation that this meditative essay is not at all a review of the Rebecca Nolan and Meryl Truett show at Gallery Stokes, which I recommend highly. I have chosen, thus far, not to review the show because I don't have any truly representative images to post. The gallery's parallel post of pictures of dirt roads does not give an adequate impression of their respective visions of Southern architecture, a shared sensibility that is delectably precise and exquisitely attuned to the genuinely strange, of which the Southern landscape has ample examples. The neon sign of the Magic Beach Motel is probably the least peculiar example.

The photographic detail above is not by either photographer.


I’ve just learned, with belated sadness, of the demolition of the Deco elements of north Florida’s Marineland, a.k.a. Marine Studios. Apparently only the entry arch was preserved when the place was turned into an updated tourist attraction featuring the dolphins but not the oceanarium (long since displaced in tourist affections by the world’s newer aquariums, and in Florida by the familiar attractions more convenient to metro Orlando).

For a quarter-century after its opening in mid-1938, Marineland did much to stir the architectural and landscaping imaginations of small children who came to look at the fish in the murky dark (and occasionally get confused because Marineland had a deep sea diver, but there were no mermaids like there were at Weeki Wachee and Webb’s City). Minimally Moderne though it was, Marineland design was worlds ahead of the architecture in the towns and cities of most of Florida north of Miami.

The dismayed report was given last night at Atlanta’s Stokes Gallery by Rebecca Nolan, who is showing her photographs alongside Meryl Truett’s in a two-person show of Southern curiosa and changing landscapes. Truett’s photograph of bounding neon rabbits on the Magic Beach Motel which is near Saint Augustine (as was and is the old and the very new Marineland) illustrates the alteration of the horrible into the hip: the mid-20th-century Vilano Beach Motel has, judging from their website, taken on an air of postmodern retro. But given the value of the oceanside land on which it sits, there are (perhaps false) rumors it may not be there much longer.

The Moderne and Deco hotels of South Beach were once considered as hideous and declassé as the motels of the succeeding generation. Today they have been restructured into the ultimate in boutique chic, but when the preservation effort was at its inception thirty years or so ago, developers were saying things like, “Williamsburg is historic. These hotels aren’t historic, they’re just old and ugly.”

I’ve opined earlier on this blog regarding the features that distinguish epochs in architecture and design, and how the prototypical models get recycled into good imitations and on down to really bad knockoffs. The problem is that until roughly four to five decades of historical distance have been achieved, we can’t tell the good second-tier examples from the godawful third- and fourth-tier ones.

I never followed up on Wallpaper magazine’s effort to preserve a ’60s or ’70s hotel somewhere in coastal Croatia (I don’t recall which of the two decades the hotel dates from, but from what I recollect as photos of Howard-Johnson-orange bar seating, it was probably the latter). I do remember that the magazine writer’s examples of what it reminded him of were all from about a decade earlier than the 1974 in which the hotel was probably built; he said something like that the James Bond of the first few movies could be imagined suavely walking through the lobby, or that the Rat Pack would have loved the hallway décor.

My point is that in many ways the ’70s were the nadir of American design, but globally, some of the designs of which faint recollections reached the farther shores of the New World were actually pretty good. They might be physical environments in which I still would not choose to linger, but they encapsulate a historical moment with genuine aesthetic integrity.

This is so even for structures that were never meant to be aesthetic in the first place, as those of us can testify who frequent restaurants and stores and galleries located in former power plants and factories and warehouses. However, I can’t help noticing that one look at the historic photographs makes me happy that someone realized that the brick building underneath the facade was better than what the original buyers had put on to prettify it.

Tastes differ, and Nolan and Truett’s photographs at Stokes Gallery have the distinction of making us see the virtues in buildings we are preprogrammed to overlook or denigrate.

More troublesome, and tiring, is the issue of regional efforts to preserve third-rate examples of a style, because the second-rate examples have all been demolished. (The first-rate examples never made it out of the world’s great cities.) Whether it is better to save something horrible because of its historic value is a question worthy of debate; it’s possible, as per the factories and warehouses, to extract beauty from places so full of design flaws that their present state cries out for demolition.

Meanwhile, being given to petty annoyance like all members of the human species except a few enlightened beings, I am irked that Target has gotten rid of some of their best Michael Graves designs and of Philippe Starck completely. But that, happily, is a separate issue.
Posted by littlejoke at 2:06 PM