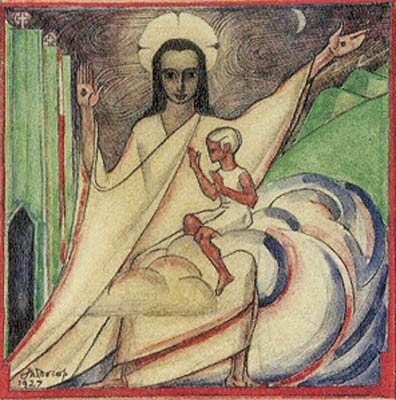 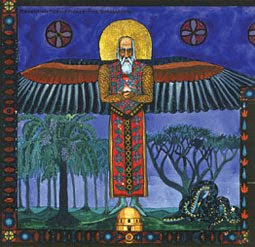 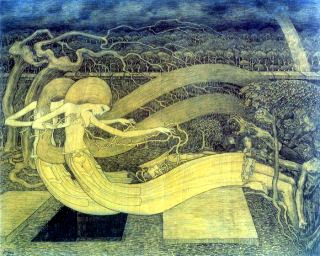 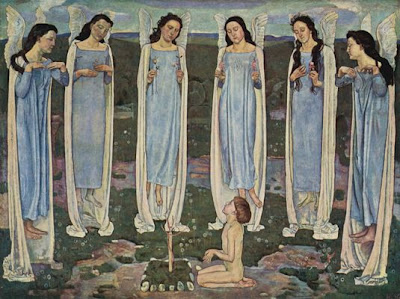 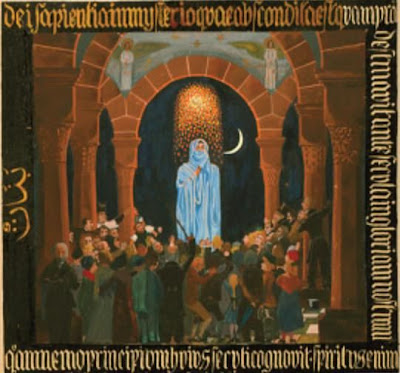 George Steiner wrote My Unwritten Books a few years back; I am increasingly accepting the need to write “My Unwritten Essays.” This is a note about one of those essays.

C. G. Jung’s The Red Book, published at long last after decades lost in legend, is one of those confrontations with the unconscious that deserves to be contextualized in terms of literary and art history. Art history in particular, because The Red Book is such a sui generis work that at the same time is of its time, and comments upon it. Carl Jung’s unconscious when he began the book was the unconscious of a German-speaking citizen of Switzerland ca. 1915. When he ended the venture in 1930, in the middle of a sentence and the middle of a painting, he did so as a different person in history, and it was the historical fact that Richard Wilhelm and others had made the visual and literary materials of alchemy available to him that led him to abandon his personal researches in favor of inherited imagery.

However, it isn’t like no one else was plumbing the psychic depths with visual and verbal resources in those years. Symbolist art and its self-consciously decadent offshoot were florid explorations of the mind’s swamps and gardens, even as Gerard Manley Hopkins was writing that “the mind has mountains, / Cliffs of fall / Frightful, sheer, no-man-fathomed.”

Jung’s visual resources included at least some of those paintings (Hodler in particular, but we don’t know, or I don’t, how far afield the work of Jan Toorop or any of the other artists of his generation got…there were widely distributed art magazines at the turn of the twentieth century, and as a different psychologically inflected modernism got underway a dozen years later with publications like Der Blaue Reiter, there were at least cultivated discussions going on about the strange doings of the new art. Jung knew what the Dadaists were up to in his own city of Zürich, and he didn’t like it. He almost certainly would have felt differently about the Symbolist generation, because the paintings in The Red Book are so often so Symbolist in their visual orientation. (They also owe much to medieval manuscript illumination, of course, since the book is self-consciously medievalizing, but most of all they look like the works of Hodler, or Munch, or Toorop or even Mossa and lesser lights whom Jung is unlikely to have seen. This similarity to painters Jung couldn’t have known as well as ones he could have isn’t an argument for the collective unconscious per se, because the styles seem to have been infectious; similar unconscious contents spawned similar paintings if the artists were inclined to paint in a certain manner already. It is the identity of consciously acquired style that reveals the structural identity of unconscious contents expressed in the individual artworks.)

Anyway, I don’t have time to sit down with recent books on international schools of Symbolist painting (and there have been several such books) or even with Robert Rosenblum’s Modern Painting and the Northern Romantic Tradition and do this right. Rosenblum’s general hypothesis is germane to Jung’s book; the long crisis of Protestant theology gave rise to a visual tradition of ecstatic relationships to the natural world in which the unpleasant as well as the delightsome facts of biology were subsumed into a profane mystical vision. At once anxious and celebratory, human beings were inserted through art into a new world of earthly and more than earthly delights that grew out of doubts about human destiny.

And Jung’s psychology is a historical response to that crisis, in the same way that Freud’s is albeit with different conclusions. The look of The Red Book, if not the details of its contents, certainly arises out of its moment(s) in time, and I suppose others are already investigating shifts in style and content over the course of the fifteen years Jung spent producing it. I certainly had meant to do so.

But since I seem not to be finding time to do it, be aware that William Willeford is speaking about the overall topic at Atlanta’s Jung Society meeting on Saturday, July 17. Those sufficiently interested in the subject should be able to locate information online here:
http://www.jungatlanta.com/schedule-willeford.html
Posted by littlejoke at 1:44 PM

I would like to exchange links with your site www.blogger.com
Is this possible?

Within the Miele S5 series of vacuum cleaners, there are different models. In addition to that, many washer and dryer combo machines have ventless drying features. Have your helper hand the unit up to you. For example, after completing task (a), task (c) may declare that many data items cannot be delivered by their deadline. Gas machines are ideal for mobility.