And Kandinsky in Milwaukee in the Twenty-First Century


Curator Brady Roberts concludes the catalogue of the Milwaukee Art Museum’s Kandinsky retrospective with an essay on “Kandinsky in the 21st Century,” in which he provides an insightful survey of those few contemporary artists who acknowledge a vital interest in Kandinsky, and explores some of the reasons for contemporary skepticism about Kandinsky’s accomplishments. 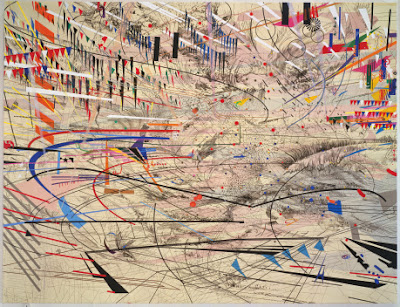 Julie Mehretu, Matthew Ritchie, and Carroll Dunham are among the artists who have taken an interest in Kandinsky’s belief in a synthesis of art, science, and culture in the anthropological sense of the word (i.e., the overall conceptual assumptions underlying what sociology calls “society”). None of them have imitated Kandinsky’s visual approaches (there is an entire body of American painting from the 1930s and 1940s that openly draws its inspiration from Kandinsky’s composition and palette, but that is a separate, obscurely historic topic).

What irrefutably separates these artists from Kandinsky is the level of optimism that accompanied his quest for a scientific basis for art. When he wrote in Concerning the Spiritual in Art that “When we remember that spiritual experience is quickening, that positive science, the firmest basis of human thought, is tottering, that dissolution of matter is imminent, we have hope that the hour of pure composition is not far away,” he meant that everything in the sciences tended towards the destruction of the bases on which the nineteenth century formed its arrogant certitudes: physics was discovering the basis in immaterial-seeming energy of a material world that was itself only an instance of fugitive moments of forms of energies consolidating (we might remember here that Kandinsky’s Russian Orthodox faith was based on the notion that matter itself is sustained by the “divine energies”); in the investigations of the new psychology, the mind was proving to be full of immaterial-seeming energies that belied the assumption that its underpinnings were open to the simple deductions of logical reasoning; and the cultural basis of world civilizations, plural, was turning out to be open to an investigation that assumed the value of European accomplishments but did not thereby devalue the discoveries of cultures that Europe found alien. Surely, given these developments undercutting belief in a unilateral progress towards an affirmation of a materialist rationality as the highest accomplishment of human evolution, the expectation of a Great Utopia was not intrinsically unreasonable.

None of these lines of thought turned out as expected. The underpinnings of culture turned out to be undecideable; is culture an arbitrary construct, or is it intrinsically itself constructed by a biologically grounded individual psychology that leads human beings to make the same mistakes over and over again, no matter how hard they try to impose a logical order on a collective behavior that is grounded in instincts instilled by genetic structure? Is there any way of deciding whether mathematics is the inbuilt order of the entire material universe, or itself only a complicated human construct that gives us useful clues as to how to manipulate the universe’s structure, thus giving rise to technology? Is there such a fundamental disjuncture between the underlying structure of nature and the underlying structure of culture that there is no underlying unity between the two, or does nature trump culture every time, even if culture is transforming nature at such an unparalleled rate that culture can’t quite predict what nature is going to do to it?

In other words, the culturally created artifice of civilization, and the biological basis of human behavior, and the processes of the natural world have all turned out to be more unpredictably related than seemed to be the case in the early twentieth century. That there is an underlying unifying order seems indisputable; the dispute is over the question of what that unifying order is, and whether human beings are fundamentally incapable of knowing it even when they think they know all there is to know about it. Are we a self-deceptive species that is very, very good at thinking that the positive effects of imaginary solutions to real problems demonstrate that the solutions themselves must be real?

That’s the kind of thing that artists in search of a Gesamtkunstwerk grapple with these days, and none of these questions instill a sense of confidence in the possibility of final solutions beyond the grim types of alteration of the course of history with which those words are now inextricably associated. We can change the world, but the extent to which we can explain it remains in doubt.

Hence artists like Mehretu and Ritchie and Dunham deal in paradox, parody, and outright fiction. Their maps include representations of all the spaces that fall off the map.

It is worth contemplating the more or less concurrent appearance of two books that relate human culture to its unconscious assumptions about nature (this abrupt digression is going to come back to “Kandinsky in the 21st Century” in the next paragraph): Yi-fu Tuan’s Romantic Geography: In Search of the Sublime Landscape and Alastair Bonnett’s book on anomalously defined spaces—but what is that book called, anyway? It seems to have begun life in the United Kingdom as Off the Map: Lost Spaces, Invisible Cities, Forgotten Islands, Feral Places, and What They Tell Us About the World, and morphed en route to the United States of America into a textually identical book called Unruly Spaces: Lost Spaces, Secret Cities, and Other Inscrutable Geographies. The transmutation of the title itself indicates the cultural differences and prior expectations that underpin human understanding of something as solid as the ground beneath their feet (and/or the large quantity of water that surrounds it).

I have long since departed completely from Brady Roberts’ concise essay, which goes more or less directly from a discussion of the artists who acknowledge Kandinsky’s influence to all those artists who consider Kandinsky hopelessly quaint, but consider supremely relevant Marcel Duchamp’s cynical embrace of the primacy of concepts and the superiority of ideas over “retinal art.”

Well, maybe Duchamp exalts the concept over the evidence appearing on the retina. The truly strange thing is that Duchamp actually returns us to the material world; he gives us not ideas but things and the fictions we impose upon them. (William Carlos Williams’ maxim “no ideas but in things” was being systematically misunderstood by poets in roughly the same decades that everyone, including Duchamp, was confused about what Duchamp’s work really implied. Today we have Object Oriented Ontology to get us all muddled up about Things once again, as though Francis Ponge’s poems had never existed, or Alain Robbe-Grillet’s novels, for that matter—but let’s stick with Duchamp and Kandinsky, shall we?)

Turn a urinal or a bottle rack around and they become gorgeously abstract sculptures instead of utilitarian objects. Put a punning title on a realistic sculpture of a window and you have the marriage of language with the physical world that has existed since Adam mythically named the animals. Put a peephole in a door that shows you a deeply symbolic but literally disturbing diorama, and you have a piece of representational art that has even more cultural history encoded in it than the most redolent of nineteenth-century history paintings. Everything in Duchamp returns us to the retinal; he just asks the questions about the retinal that Matisse didn’t want us to ask, preferring that art be regarded as a comfortable armchair. The eye is part of the mind, and vice versa. We see because we think because we see.

We are back to Kandinsky’s conceptual gropings after a Total Work of Art. The only difference is that we are more resigned to the possibility that there is no totality; and it is worth asking whether we have given up on the possibility a little too soon.

How we frame a question typically predetermines the answer; the problem is framing it at all, to begin with, and leaving the frame open enough to admit the possibility that the most adequate answer presupposes a frame we didn’t suspect.

I shall not burden this essay’s readers with my probably irrelevant allegory based on the dysfunctional aspects of the landscaped space leading into Santiago Calatrava’s amazing addition to the Milwaukee Art Museum, and another one based on the question of whether Kandinsky will look different when approached via the architecture of a former Federal Post Office built in the era of the stripped-classical transmutation of Art Deco. Probably not; the rigorous neutrality of gallery spaces in most of these differently conceived museums is designed to magick away all the spectacular differences of architectural volume that visitors have just experienced in the process of getting to those bland variations on the white cube.

Galleries painted in the rainbow tones of Munich’s Lenbachhaus, now—such spaces raise questions about context of which Kandinsky would doubtless have approved. He might even have designed a questionnaire to make us aware of the differences. But in fact those spaces (in the institution that co-organized the 2009 Kandinsky retrospective) are only meant to evoke the historical epoch in which the paintings installed in them were created. That they shock us into a different mode of awareness is largely a fortunate accident. 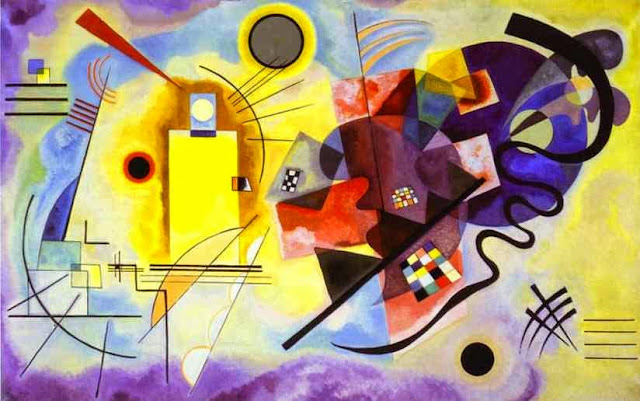 Posted by littlejoke at 6:23 AM