Stuck (Sort of) in the Middle with You and Almost Everyone Else: Thoughts About "Middle" at Gallery 72, Atlanta

The ordinary-seeming concept called “middle” is a major puzzle.

For one thing, no matter what the dictionary suggests, “middle” is often almost the opposite of “center.” The center is ordinarily a place of honor or at least of organization. Even in ordinary usage, one wouldn’t normally say that the sun is the middle of the solar system. In the history of religions, “Center” is a word to conjure with, even in Meister Eckhart’s (and/or others’) definition of God as a circle whose center is everywhere and whose circumference is nowhere. “God is a Middle”? Not so much. Postmodern philosophy sought to decenter Eurocentrism; less disturbed by terms and operating assumptions that happened de facto to be in the middle of things.

The middle term of a syllogism gets a certain amount of respect...you can’t get from Point A to Point B without it. But in general, middle-ness is in-between-ness, a point midway on the way to somewhere else or from somewhere else. The middle is also, as is increasingly recognized, the midpoint in a gulf separating two established terms. There is a continuum, or a spectrum, but we don’t know that, not yet anyway: out there in the void that ought to be a bridge, comes the interstitial middle term.

So it makes sense, in an era celebrating neither-nor more than both-and, and the provisional more than the firmly established, that a show called “Middle” should have been mounted at Atlanta’s Gallery 72 courtesy of curator Candice Greathouse.

Unfortunately, as I just now implied, we are in a bit of a muddle over “middle.” I am not entirely sure that Greathouse’s show, which runs through February 15, has cleared up the issues of “inbetweenness and potentiality through material and process” that she says the show addresses.

That definition manages to narrow “middle” down a little. We are looking, we might think, at formalism, at the roots of provisional painting, perhaps. But we would be wrong in thinking that, or at least I think so. 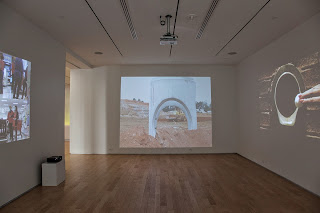 For one thing, there is the almost grotesque marriage of Freud and Marx in the video gallery. Meta Gary’s Enterchange depicts the endless loop of earthmoving equipment in late capitalism’s ceaseless logic of demolition and development, as framed in the vaginal opening of a leftover piece of concrete, or more likely one that hasn’t been put in its place yet. Brittainy Lauback’s Hole keeps inserting digits or foamy materials into openings of one sort of another, never quite attaining a perfect match nor truly filling the unappeasable voidness. Patricia Villafane’s multiple-image video of Target and its target-shaped store logo (talk about a center versus a middle!) presents a different sort of unappeasable desire and irremediable deficiency, a process of exchange in which none of the parties can ever be completely satisfied even if the transaction is regarded as open and above reproach. 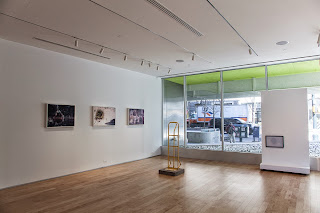 That leads us, logically I suppose, to Christina Price Washington’s Thoughts on the (excluded) Middle, in which a vague pictorial or non-pictorial image set well below eye level on a movable wall (we learn from her statement that this is a picture of a helium filled balloon) carries a great deal of conceptual and openly philosophical weight along with it. “The privileged position of the isolated photograph” is indeed “destabilized,” and we can’t help (or I can’t, anyway) but think of Max Nordau’s Luftmenschen, people left floating in air by the circumstances of modernity, people whom Rilke characterized in the Duineser Elegien as the “disinherited children to whom no longer what’s been, and not yet what’s coming, belongs”—humans perennially in between times and places. This isn’t, however, Price Washington’s major point, as she finds herself “exploring the photograph as the subject and the information in the making.”

This exploration places Price Washington’s work firmly in the middle between the Law of the Excluded Middle and the Fallacy of the Excluded Middle, the former being the assertion that a proposition is either true or not true, no other choices available, while the fallacy considers “only limited alternatives...while in fact there is at least one additional option.” (These definitions open to discussion, because Wikipedia.) One could argue productively, if hyperbolically, that in a world of spectra and continua the law of the excluded middle is always already the fallacy of the excluded middle.

That leaves us with Margaret Hiden’s and Trevor Reese’s mysteries, as well as a couple of other in-betweens courtesy of Lauback, who offers a photo of a set of parallel fluorescent tubes that once held a lighted sign but holds one no longer, and that presumably will hold one once again—another product of late capitalism which belongs no longer to what’s been, and not yet to what’s coming. Hiden’s digital recapitulations of damaged slide photographs exist in a space between past and present, if not future, but only if you know what you are looking at—although I suppose one could also make up stories about the obliteration of recorded memory and the role that lack and fragmentation plays in the interpretation of history. In that sense, they are interstitial, neither unambiguous visual documents nor outright fictions.

Trevor Reese’s sculptures, I suppose, exist on the trembling interface between settled history and the shorthand with which we capture or configure it, although his de-wheeled hand truck set in concrete in in storage seems to have made a fairly firm transition from practical instrument for moving things to symbolic monument to the moving of materials. His lava rocks interspersed among existing rocks in the outdoor decor feels more like an unnoticed supplement to an architectural element that could be supplemented indefinitely. (One could, for example, put one or more pieces of old-fashioned public ‘plop art’ on top of the rocks.) Reese’s statement to the effect that “My interest in vernacular architecture and folk psychology is influencing my current thought on literal relationships, the different types created by people and things. I find myself navigating an increasing index of interpersonal and ‘mechanical’ connections” is headed in an extremely productive and correct direction, even if I personally can’t quite get what he’s driving at in his concrete (as it were) metaphors. 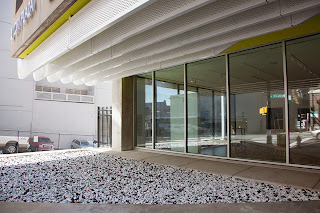 That’s about as far as I can push this provisional midpoint. There is just under a week for those who happen to read this non-review right away to go confirm, disconfirm or, preferably, correct and expand upon my intuitions.