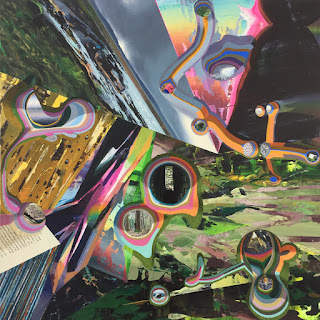 Sometimes the three-week limit imposed by gallery schedules results in remarkable injustices. Benjamin Britton’s “Desire, broadly,” which closes at Marcia Wood Gallery on March 2, should get a substantial, detailed analysis combined with ample time for viewers to visit and contemplate for themselves what is at stake in these remarkable paintings. Instead, this is as good as it gets.

Britton is working with visual metaphors for the manifestations of memory and desire, especially with the ways in which desire manifests as desire for the impossible, for a time and place that perhaps never was and in any case is not to be had in the way that desire wants to have it. As Marcel Proust put it, referring to emotionally charged associations of memory in his monumental multi-volume novel In Search of Lost Time (a.k.a. Remembrance of Things Past in the classic English translation), “the only paradise is the paradise we have lost.”

Proust is to the point here because the phenomenon known as Proustian memory is one of the starting points of paintings that include trompe l’oeil representations of actual pages of Proust’s prose. The fragmentary texts, themselves evocations rather than representations of coherently formed moments, combine with futuristic, motion-filled abstraction in which the swooping lines terminate in almost photorealistic details of bits of landscape Britton terms “wormholes,” borrowing a term from contemporary physics for what Wikipedia piquantly calls “a transcendental bijection of the spacetime continuum” that “can be visualized as a tunnel with two ends, each at separate points in spacetime (i.e., different locations or different points of time).”

Wormholes, in other words, are the physical equivalents of what Proust visualized only as fantasy, and if they exist (which is in question) they could presumably actually link an observer’s fantasy-laden brain with the object of its desire. The only problem would be that the object of its desire wouldn’t correspond exactly with the shape of the desire formulated by the observer’s subconsciously modulated consciousness. What the Germans call Sehnsucht and the Welsh call hiraeth is a wish for a home country we have never inhabited, or a landscape more perfectly answering to unspoken wishes than any landscape on earth ever has or can have done. 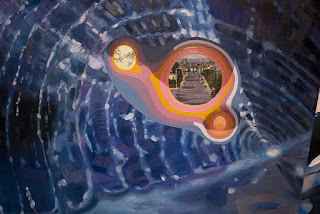 Some of these paintings derive from a residency in Ireland, a territory particularly amenable to the generation of wishes impossible to fulfill or even to articulate. The discovery of actual representations of townscapes or trees and fields in the tiny representations of circular openings in what looks like a sci-fi illustrator’s version of cross-dimensional geometries evokes an indefinite sense of pleasure that is not only undefined but well-nigh indefinable. These works of art, in other words, brings forth the emotion it seeks to render and investigate in their combination of imagery.

In a better world than this one, such marvelously titled paintings as Unsettled fascination on the edge of seasickness and The moment held so loosely that it precedes the thought but not the feeling would receive an extended, work-by-work analysis. As it is, the notion of such a comprehensive examination will have to remain an object of unfulfilled and unfulfillable desire. Which, come to think of it, kind of fits.

Posted by littlejoke at 5:25 AM