A Prolegomenon to Any Future Art Criticism, with Apologies to Readers for the Allusion to Immanuel Kant 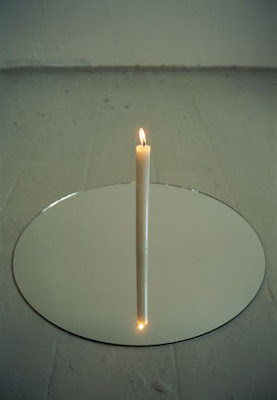 Olafur Eliasson’s “I Grew Up in Solitude and Silence” is a simple work of art that, like so many simple works of art, reveals more about the perceiver, the person who experiences the artwork, than far more complex works ever could.

As photographed in 1991 in Copenhagen, the work consists of a white candle fixed to the center of a circular mirror. In this photograph, which I encountered as a shared image posted without commentary, the lighted candle is thus the only thing reflected in the mirror against a nearly uniform background. Other iterations, shown in other photographs on Eliasson’s website, were situated in more complicated surroundings.

Seeing the photograph, I immediately thought of “burning the candle at both ends” and wondered if the idiom exists in other languages. Many other associations flickered across my mind: the doubling of the light by the power of reflection, for one; but above all the image conveyed what Eliasson’s title (which wasn’t attached to the photograph I saw) conveys: a poetic isolation in which the only thing mirrored is the candle and its own light.

Eliasson’s webpage (https://olafureliasson.net/archive/artwork/WEK101839/i-grew-up-in-solitude-and-silence) contains a quotation from a catalogue essay that is in many ways the quintessence of art criticism (I assume that the description in the following paragraph is Eliasson’s, and the passage in quotation marks is by Biesenbach and Marcoci):

A candle situated at the centre of a circular mirror burns slowly, gradually reducing in size. The reflection extends the candle into virtual space with flames burning at both ends.

'Here one’s perception is split between the experiential narrative of watching the candle slowly burn and the projected narrative of anticipating different scenarios about the object. According to the philosopher Henri Bergson, the mind tackles duration as a simultaneous process merging past memory and future projection within a continually unfolding present. Looking at the flickering flame, the viewer thus experiences three overlapping temporalities: memory, actual perception, and projected narrative. The latter is essentially an amplified, fastforward version of what happens in the present, but it summarizes any number of likely scenarios (the candle gradually becomes shorter as it burns; the wax drips on the mirrored surface; the mirror gets too hot and cracks under the candle’s increasing heat; viewers approach the work to look more closely and see their reflections in the mirror). At once absorbing and analytical, the work exists only for the duration of the burning candle, yet it calls up a roster of prior experiences and corporeal states.'

—This passage from Biesenbach and Marcoci is valid as far as it goes, in that it describes what they experienced when they looked at the artwork. There is in fact “memory, actual perception, and projected narrative” going on when a viewer looks at this artwork (and further complexity is added when the viewer knows the title of the piece). But the assumption that the viewer experiences only “projected narrative” is too simple. My immediate response involved memory (of the commonplace saying) and a series of less than fully formed associations, any one of which could be followed in metaphoric directions. Not one of them involved the future state of the candle, although that would have come into my mind soon after the awareness (which I did have) that for the viewer to stand in a position in which they were reflected in the mirror would change the artwork and add a new layer of possible meaning. In a photograph of the work, of course, this cannot happen.

None of this has anything to do with what Henri Bergson was talking about, and reflects the fact that Biesenbach and Marcoci were perfectly capable of writing as though the first thing that popped into their profoundly educated heads was the only possible interpretation of the viewer’s experience of the artwork.

But the more likely immediate experience, which I suspect was not only mine but that of the person who posted the photograph on social media, is “Oh, wow.”

In other words, whether in a photograph or, I suspect, in situ, the immediate experience is of a simply arranged set of objects that evoke unconscious associations with emotions attached to them. Only afterwards does the experience of wordless wonder (or inarticulate expressions of amazement) give rise to thought.

I also suspect, though, that this artwork is more difficult to stage than I initially assumed; the candle would have to be a dripless one in order to remain for more than a brief moment in the condition seen in the photograph, and this would ensure that the imagined outcome of wax dripping onto the mirror is a hypothesis of a future that can exist only in Biesenbach and Marcoci’s imagination. But this is how we experience not only the imagined future but the perceived present; we make our best guesses of what it is we are experiencing, based on what we remember of what happened in the past. Our best guesses are quite often wrong. My own guess here, based on the photograph of pristine perfection I initially saw, was itself wrong; one of the work’s other iterations, in visually cluttered surroundings, features a candle that is already dripping wax down the side. But that means that the pristine moment of aesthetic amazement captured by the photograph is an artwork that belongs to the realm of photography, not to the realm of installation art in which such elegantly ordered permanence is always a fiction.

The question is, do art critics have any business explaining all this? Should they sound so smugly magisterial when they do it?

Is art criticism limited to commenting upon the gasp of admiration when we first see the image or the work itself—with, at most, the further notation that different viewers will have radically different experiences of the work once they are done with gasping admiringly? Art journalism, certainly, has column inches enough to say no more than that. But how far ought the critic to go in awakening the viewer to the potential depths of their first simple experience?

I’ve spent more years wrestling with that than I care to think, and I still don’t know the answer. The temptation is always to say “Oh, wow,” and settle for that.