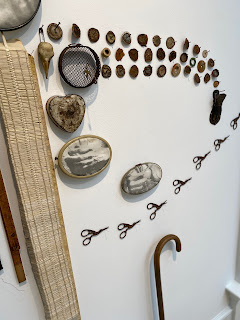 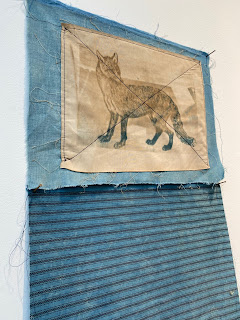 “Is this trip really necessary?” was a motto on World War II posters intended to remind U.S. civilians who were putting up with gasoline rationing, along with restrictions on buying tires and new cars (there weren’t any), that they had better think twice before wasting their limited travel resources on trivialities, or even on ill-thought-out trips for essentials. When it comes to art, of course the trip is necessary. Reproductions, whether in books or in high-quality digital versions online, aren’t the same thing on several levels, even for art in the age of its technical reproducibility, to use the contemporary translation of Walter Benjamin’s oddly rendered phrase about “the age of mechanical reproduction”— movies may be viewed more on tablets or phones than in theatres, but most of them were designed to function on a much larger screen, just as photographs intended for exhibition were created with a particular scale in mind, and were certainly not meant to be viewed in the internally illuminated form online viewing gives them—even in the case of digital prints.

So I feel strange recommending the notion that there are shows that ought at least to be looked at in online images accompanied by whatever curatorial statements originally accompanied them. But for a variety of regrettable reasons, the shows I am writing about here didn’t get the coverage they deserved, and this is their final week before closing.

Of course, it remains the case that most of us will only experience almost all of the world’s art shows in whatever form of documentation the galleries and global biennials choose to put online, just as we used to be limited to whatever was shown on the paper invitation to the opening or in the print catalogue describing the exhibition. And seeing a digital simulacrum of the whole show is still better than having no idea at all of what it looked like.

Thus I am pleased that Sandler Hudson Gallery has provided an online catalogue of William Downs’ curatorial efforts in “An Empty Space to Fill (Phase Two.)”:

It is obvious, just looking at the juxtaposition of artworks, that Downs has thought about the interplay of palette and the visual rhythm of internal composition in deciding how to make this exhibition a coherent experience. He also assembled a range of styles and perspectives on art and on the world that it would have been interesting to analyze, given but world enough and time. (Just as writers are always looking for the perfect reader, I suspect curators are always looking for the perfect viewer and/or critic, the one who will get out of the show everything they put into it.) I’m truly sorry that the chance circumstances of the month of August allowed this show to slip through the interstices of art journalism.

It closes on September 3, so friends living in metro Atlanta still have a number of days to see the show for themselves, in person.

Even more so do I regret the disappearance without commentary of Douglas Baulos’ “Night’s Hand on Your Shoulder,” curated by Lisa Alembik for Swan Coach House Gallery. Balios’ citation of quilting strategies and animal symbolism in the composition of symbolic portraits and other elaborate pieces of mysterious imagery deserved the kind of unpacking that I wasn’t capable of tackling even had I been given the opportunity. And once again because of the vagaries of the accidental gaps of August, nobody else took up the challenge either.

I am posting a couple of detail shots here more in the nature of a teaser than elucidation of anything. But again, friends inclined to make the journey can see the work itself, and read Alembik’s acutely perceptive curator’s essay, at the gallery through September 8.

Posted by littlejoke at 9:37 AM