and a last chance for Atlantans to see contemporary Tibetan art 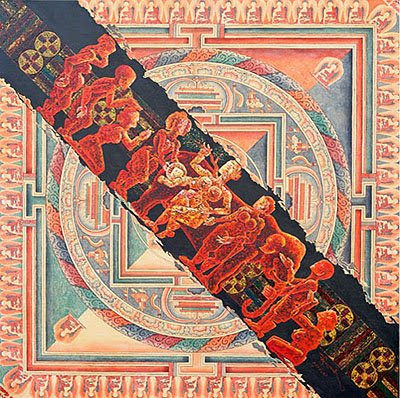 Jhamsang's Birth of the Buddha is less startling than his Century of Change but there are few readily public images of the works actually in the exhibition from the Shelley and Donald Rubin Collection currently at Oglethorpe University (through Sunday February 22).

The latter painting of the Buddha Amoghasiddhi is painted in a 14th century technique but overlaid with gold computer chips and accompanying circuitry that are not immediately apparent when viewing the painting. Like the century of change itself, the painting (which also contains "stone pigment, acrylic, soy sauce and black tea") finds innovative ways of incorporating new technologies into old spiritual traditions. The two are blended so adroitly that it is clear which has the upper hand (the circuitry doesn't do anything, and it is implied that the tangka of the Buddha is or was a "technology of the sacred"), but not so clear whether the positions could be traded comfortably. A digital reproduction of the painting would complete the parallel, but I couldn't find one and don't believe in photographing and posting work without permission, which I never found time to get.

Fortunately, reviews of the exhibition have appeared online and in print publications. It is indisputable that the exhibition deserves a full-fledged contextualization and analysis. Gade's multi-culti "Scriptures" (the quote marks to indicate "so-called" and the italics to indicate the title of an artwork) are masterworks of incoherent narratives written on successive pages in Chinese, English, and Tibetan, as well as in Gade's own made-up script and fictitious language. (One features a King of Clubs on which the kings are Buddha and Ronald McDonald.)

The show indicates the condition of twenty-first century Tibet, caught now as in past centuries between larger cultures that have left their imprint on the stubbornly autonomous cultural zone of the Tibetan-language peoples. Shelka's paintings of Buddhas and of sunglasses-wearing locals demonstrate the meeting points of the forces that today are in sharp contention as well as in a harmony that is up for discussion.

What form successive syntheses will take is a matter that the artists leave open. What makes this exhibition of particular interest is that it incorporates as much tradition as it does into work intended to challenge the expectations of viewers from all cultures, their own included.

I hope someone has found the time to give this exhibition the serious study it deserves. Those within driving distance should consider seeing it for themselves since there is no catalogue and catalogue essay to document its accomplishments.
Posted by littlejoke at 8:46 AM

Greetings. I am delighted to see your comments about this exhibition, especially the acknowledgement that this work deserves serious study and contextualization. I am currently writing my dissertation on contemporary Tibetan art, and served as a consultant for this exhibition. I was also commissioned to write an essay to accompany this exhibtion, but it has not appeared in print, although I would be happy to share it with you and welcome your impressions.
Additionally, I wrote a catalog essay for Contemporary Meets Tradition (Rossi & Rossi, London) where the painting Century of Change by Jhamsang was first exhibited. I examined it closely, and included commentary from my interview with the artist in Lhasa.
I am happy to share this essay with you, as well as materials from other exhibitions with which i assisted and/or curated, if you are interested.
I welcome you to contact me at leigh.sangster@gmail.com