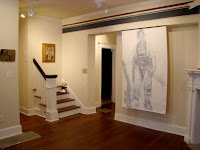 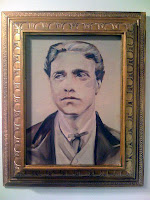 Viewing “we collected stories,” Yana Dimitrova’s just-closed Kibbee Gallery show, I remarked, “It’s always important to understand what it is we don’t understand.” I have since realized I was paraphrasing the punch line of one of my favorite Charles Shultz cartoon strips, but the point remains valid.

Dimitrova’s installation was meant to respond to the architectural space of the gallery while turning it into a version of a small Eastern European museum, a simplified museum of Bulgarian patriotism. Since one room honors a nineteenth-century martyr of the Bulgarian war of independence against the Ottoman Empire and another room is devoted to a nineteenth-century Bulgarian poet, I gather (not necessarily accurately, which is my ongoing point here) that the rough equivalent would be an installation in Bulgaria devoted to Nathan Hale and Walt Whitman—except that Whitman somehow has acquired a global reputation; and a poem in English posted next to a portrait of the poet would have a different resonance in a world where nonsense phrases in English decorate T-shirts and jackets across continents.

So the type and degree of cultural sub- or semi-literacy isn’t quite symmetrical or reciprocal across dominator and marginalized cultures, although Bulgaria is a special case because, unlike its Balkan neighbors, it was a Russophile state from the beginning, linked by religion and the Cyrillic alphabet as well as the other accidents of history that counted for more than geographic proximity did. (The next-door Romanians looked to Paris, not Moscow or St. Petersburg, and were proud of their ancestral “latinity.”)

So here we have—well, never mind their names, although we do have a biographical paragraph in English regarding the martyr, rather than the original-language extract from the poet, and Dimitrova gives us their last names in the titles of the portraits. We still won’t recognize or even be able to read the slogans nor will we understand the significance of the effective erasure of one, overlaid by the decorative trim of the museum.

The point is that to judge from the comments about the show that have appeared thus far, the opening night crowd (and there was only one other public event during the run of the show) understood nothing. And why should they? I thought the Bulgarian poet looked a bit like Arthur Rimbaud, and likewise misidentified the semi-erased reproduction of a famous photograph of the martyr in full resistance regalia. (We won’t go into what I thought it was a picture of, but it would have fit into the overall theme of twentieth-century Bulgarian history, not nineteenth.)

Dimitrova’s point, expressed with her customary exquisite command of pictorial conventions, is that the history and symbols that mean so much in her homeland are of no use or significance whatever in her present context. But this is the circumstance of nearly everyone in the age of globalization. The myths and cultural tribalisms of the dominant industrial democracies have not so much come under question as they have been set aside by a digitalized world-without-borders in which corporate logos and brand slogans have displaced the totems of national governments when it comes to the imaginations of the subject populations. Cynical about national pretensions and brand loyalty alike, the denizens of the demesne of global commerce don’t understand what it is they don’t understand.

And installations like Dimitrova’s might help them understand that fact, if anyone had the time to look and to write about them. There are ample imperfections in this particular presentation (I’m not sure that all the moments of incomprehension are instructive) but I’m glad that Kibbee Gallery made the space available for the experiment.
Posted by littlejoke at 10:01 AM