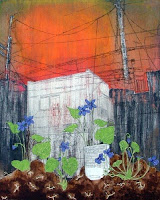 Scott Silvey's ambitious sculptural installations will be remembered by those who attended various alternative-space shows prior to his decamping for parts ever further afield.

His new and quite different paintings of flowers and architecture, transported to Atlanta at immense expense from his current home base of Tokyo, reflect his sensitive effort to transmit the spiritual currents of a culture via visual metaphors. But first and foremost, they are uncommonly fine paintings.

Though the show runs into July, it should be visited early and often (and for once, that cliche should be taken literally). Silvey's combination of painterly gesture and precise drawing technique results in a body of work that rewards extensive and repeated viewing.

One hopes that the various artsites on the Web will provide full-length reviews in due course, or are already in process of doing so. There are formal and factual questions that ought to be addressed in greater depth.

I intend to get out to this next Saturday...I really wanted to make the opening,but couldn't.
(Do openings create a different air around experiencing the work? or is that more of a sign of the self-awareness(or lack of) self-awareness of the person viewing the work...
Irrelevant tangential thought,I know-along with that thought is to wonder: if a person "should" feel a duty to have an interest in what others are showing,that is,if they themselves are interested in showing work.Should it not naturally Be -and, does that involve wanting to be involved in all the elements an opening presents around just experiencing the work-and-while im really being tangential on tangential-what is the best way to be supportive of work we appreciate? to emulate in your own work? to blog about? talk about? ...buy?
Of course I realize art being highly individuated brings to mind the truth that,even given an interest in art, people are simply interested in what they are interested in,or is there a responsibilty to being "open"-to perhaps learning new likings...shld atl galleries give people what they want or tell them what they want? and do they try to do either? I'm over compartmentalizing the entire thing, i know..but its fun to try.
For me,all of these questions are only relevant if one openly considers the atlanta art scene to be in some sort of need.)

anyways. I've heard nothing but good or great about this show...perhaps i will find it inspiring.

my review of this show is on here,as is one of the current white spec show...