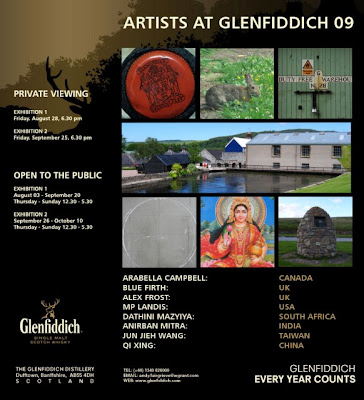 Though there was no way of knowing it at the time, it was an excellent day for artists when the family that owns Glenfiddich distillery (today part of the still family-owned Wm. Grant & Sons) made the imaginative leap of marketing their product as-is worldwide as single malt Scotch, instead of following the tradition of traveling the world, first on steamers and later on jetliners, selling it off to blenders in the traditional manner.

For in the fullness of time, the family proclivity for imaginative gestures bore fruit in the decision to start a summer-long artist in residence program, invitation only, giving a few artists the freedom to create what they would, the only requirement being the donation of one piece to the company's collection. 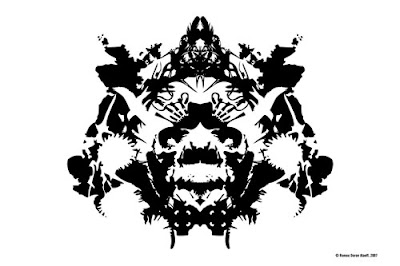 In 2007, New York-based artist Romeo Alaeff produced a series of prints titled "War on the Brain," gorgeously revamped Rorschach blots containing references to conflicts from William Wallace and All That to the smell of napalm in the morning in Vietnam. Another 2007 artist, and if I were not writing away from my CD of images I would say who, produced a conceptual paradox worthy of Marcel Duchamp: a sweeper's broom thrust through a standard-issue barrel, to be filled with new-make spirit and laid down for however many years, at the end of which time it would still not be considered Scotch whisky because the invading broom handle would have violated the terms within which the company's whisky is defined.

That year, the workers were also creating art: the distillery's barrelmakers were having a go at energetic self-taught evocations of the years in which certain barrels then due for bottling had been laid down in the warehouse (the Berlin Wall and the logo of Windows come to mind as subjects they chose for sculpture).

Now the 2009 residency has culminated in the annual exhibitions of work made in residence, and I regret that difficulties in revising this piece have prevented me from publicizing it in any meaningful way.

The program is one of those marvelous gestures that adds its small bit to the web of world culture, and one ought to be pleased to see the money spent intelligently in this fashion.

Full disclosure requires me to remind you (remind because I've written this before) that the only paid-for-by-others press tour of my life allowed me a firsthand experience of this program, which has obviously had a lasting impact. They will never spend another U.S. dollar or Scottish pound on me, so I feel justified in providing once again this complimentary meditation, especially since it allows me to mention once more the work of Romeo Alaeff, who also will never get another U.S. or U.K. penny from Wm Grant & Sons and who could presumably use the money if someone feels inclined to look up his website and invest in one of the "War on the Brain" pieces.

And anyone within driving distance of Dufftown still has a couple of weeks to see the second exhibition in this year's series.
Posted by littlejoke at 8:23 AM

Ok I just baught an Iphone 2g from somebody and it had a lot of junk that I did not want, so I went to the restart page an started erasing all the memory. Now the problem is that its been erasing the memory for almost 12 hours already, it just shows the apple logo and a little circle.. I already pushed the home button and the top button to restart it but all that does is turn it off, and when I turn it on the same thing starts happening. I called apple and they said it has no warranty, any advice?