Byzantine Things in the World, a Year Later: a Belated Post Delayed by Formatting Issues


Byzantine Things in the World: A Preliminary Exploration of an Extraordinary Experiment (The Menil Collection, Houston, May 3 - August 18, 2013)

What does it mean to enter into an exhibition that changes our perception of space by way of the objects that occupy it? The answer at first seems obvious, because exhibitions have been altering space in that self-aware way since Malevich hung his Black Square in the place normally occupied by an icon, nearly a century ago. At first incautious glance, Glenn Peers’ “Byzantine Things in the World” exhibition at the Menil Collection looks to have returned the icons to their accustomed places (albeit with the intellectual saints Athanasius and Basil replacing Christ and the Virgin as they frame a secularization of the Holy Door through which the priest approaches the altar): 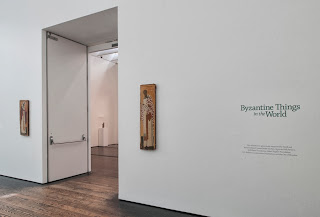 But we may soon notice something strangely amiss: 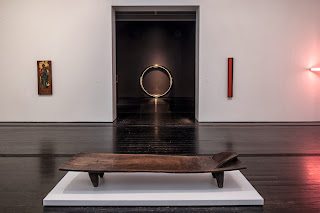 Eventually we may discover a chillingly near-familiar placement of a remarkable icon of the Mother of God. But in order to reach this space deep within the galleries, we must traverse a thoroughly unfamiliar territory: 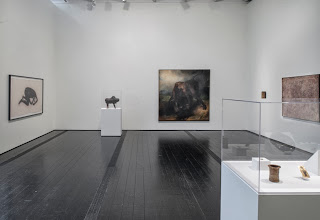 There is an alternation of light and dark in which color and object rhyme curiously: 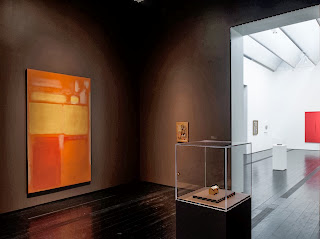 “In the gloom, the gold / gathers the light against it,” as Ezra Pound wrote of the Byzantine splendors of Ravenna, but the gold is from Rauschenberg and Klein:

The abstract gold of the wall-dominating paintings is echoed in the gold of a tiny Byzantine reliquary, juxtaposed with a gold-enhanced Entry into Jerusalem icon: 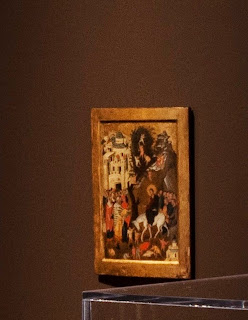 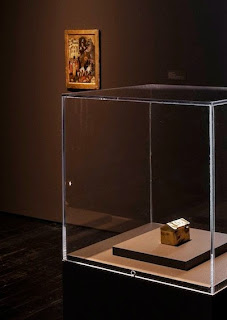 An aniconic atmospheric painting echoes the longstanding claims of abstraction to a modernist form of spirituality, a claim that reached its zenith in the Rothko Chapel: 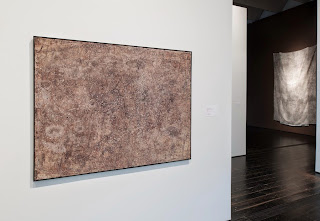 But the aniconic painting itself is adjacent to another Byzantine icon: 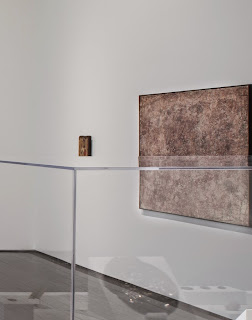 Other juxtapositions seem to make other, more mysterious claims, such as Joseph Cornell’s “Owl Habitat” box positioned in equality with a Byzantine saint, adjacent to a Gobelin tapestry that has no religious content whatsoever: 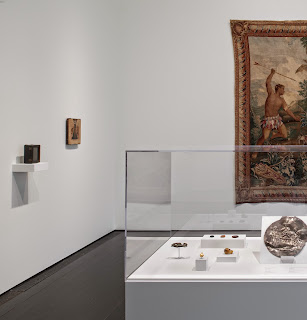 The exhibition is filled with shocking contrasts of scale and lighting that also feature parallels of shape but not of function, or else of function in startlingly different shapes: 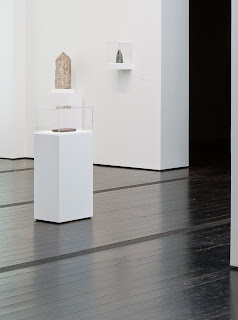 The exhibition catalogue thoroughly revises our sense of how objects ought to operate and be approached, but it gives only a faint approximation of the sheer sensory disorientation achieved by “Byzantine Things in the World,” the exhibition space, during an all too brief presentation of the things themselves: 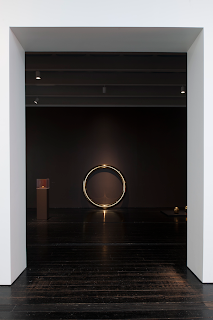 The sense of a postmodern sacred given by the exhibition is exceeded, we might imagine, only by the vacancy left in the now-unviewable Byzantine Fresco Chapel Museum elsewhere on the grounds of the Menil Collection, a building that was constructed specifically to house the long-term loan of dome and apse icons restored by the Menil after their recovery from art thieves in northern Cyprus: 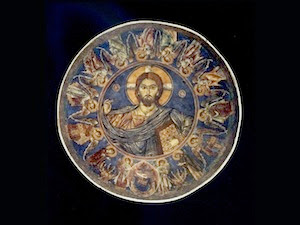 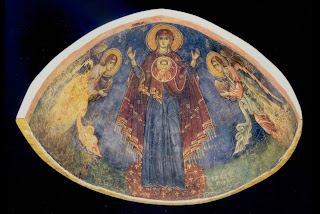 The restored icons were resituated in their traditional devotional places, but in an almost startlingly contemporary architectural setting, which Peers refers to in the exhibition catalogue as a glass chapel: 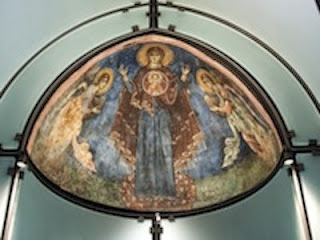 Minus the icons, which have now been returned to Cyprus after the agreed-upon loan period, the chapel might become as eloquent a space of absence as the nearby Rothko Chapel, but no one seems to have realized this, not even Glenn Peers whose exhibition was inspired by the hybridity of the original icon-inhabited space: 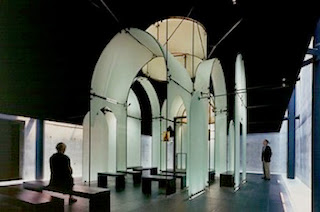 What Peers did recognize was the relevance of the longer-term “Witnesses to a Surrealist Vision” exhibition elsewhere in the Menil Collection, a room reproducing the sort of unexpected juxtaposition of modernist, found, and tribal objects that characterized the Surrealists’ own exhibitions. 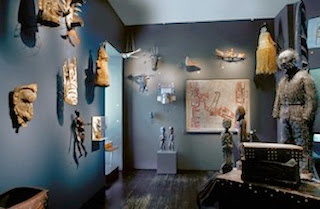 As with this “room of wonders,” Peers’ exhibition succeeds by virtue of its manipulation of form and space long before any of his debatable propositions regarding the relational nature of objects come into play. The contexts imposed by modernist art history and/or Eastern Orthodox sacred narrative have been magicked away by Peers’ curatorial wizardry as thoroughly as the various ethnographic and art-historical contexts insisted upon by scholars have been made to disappear in “Witnesses to a Surrealist Vision.”

Primary experience has replaced reflective analysis. This raises disturbing issues for those of us who insist that human beings are, above all else, storytellers. But human beings are also creatures of induced visionary experience, makers of art that depends upon primary sensory disorientation, and humans have been making such art ever since the Paleolithic cave paintings were drawn to conform to the irregular shape of the rock, and to replicate motion when viewed by flickering torchlight.

If stories give us a sense of our place in the world, we also seem to be a species that likes to experience not quite knowing where we are, in a strangely configured space that encourages deep emotions other than simple dread. The all too briefly available spaces and contrasts of “Byzantine Things in the World” re-created for skeptical contemporaries the sense of disoriented awe that Byzantine churches did for Byzantine worshippers, and that Eastern Orthodox worship spaces still do for those who are responsive to Christian imagery and the Christian message. Determining what else Peers might have accomplished is dependent upon close perusal of his remarkable catalogue, which would have to be the subject of a separate essay. Few of the themes presented in the catalogue are self-evident in the arrangement of the exhibition, though the catalogue clears up a good many conceptual mysteries. The catalogue, however, remains available, while the exhibition exists only as a series of evocative photographs that can only hint at what it was like to move through the space itself.

Text ©2014 Jerry Cullum (all images are copyright by and reproduced by permission of the Menil Collection)
Posted by littlejoke at 11:21 AM