A Note Regarding the Artist's Talks for Two Atlanta Exhibitions, March 21, 2015; a non-review even more non- than usual

Space, Time, and Gender: or, why you should go to Pete Schulte’s talk at Whitespace at 2 p.m. this coming Saturday, March 21, and then get over to Meredith Kooi and Nicole Akstein’s similarly structured talks at Kibbee Gallery at 3 p.m.


“Imbued with history and memory, the objects inhabiting our world breathe and vibrate. These objects and their surroundings are constantly on the precipice of becoming strange to us.” So writes Meredith Kooi in “Enstranged Spaces,” her half of “Close,” the two-person show at Atlanta’s Kibbee Gallery curated by Chanel Kim.

The work of defamiliarization (cf. Brecht’s Verfremdungseffekt as both distinct from and related to Shklovsky’s defamiliarization or ostranenie) is different in each generation, and right now it seems as unexpectedly phenomenological as anything else, although Kooi claims to be incorporating history in a way that only existential phenomenology ever managed heretofore—Merleau-Ponty being a case in point, perhaps.

But biology has lately also come into play, thanks to the momentarily famous debate over “What color is this dress?” wherein the distortions imposed by poor lighting in a cellphone photo and online viewers’ wildly variant screen quality combined with randomly reproduced jpegs led to an argument that then led to the realization that we see differently not just because we have different histories but because we have different retinas. Take that, Louis Althusser.

I am engaging in wisecracking banter instead of getting down to cases because in this case, I am not quite sure what the case is. Still less am I sure in the case of Pete Schulte’s Whitespace and Whitespec exhibition “Light a Fire,” an incredibly site-specific evocation using things/artworks that are the opposite of site-specific; or rather, they transform the site in a specific way and would do so on whatever site they could be placed in this particular order. 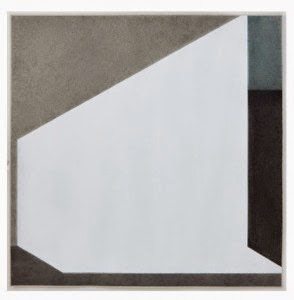 Schulte’s objects and Kooi’s deploy geometry to opposite effects. The fact that I cannot say quite what those effects are is the reason I am writing this, the most non- of all the non-reviews I have thus far posted, for I cannot review work that I in no way claim to understand, only experience. The “wow” effect is positive in both cases, more so in Schulte’s because of the cumulative impact of the repetition of geometric forms in a minimal palette combined with a recording of evocative tonalities presented in the illusion of an antique playback medium (the vinyl record on a turntable has nothing to do with producing the soundtrack emanating from the machine’s embedded speakers). Something is going on that is reminiscent of what is going on in the best of Russian Constructivism, a body of work in which the archetypal qualities of the form and color subvert all of its would-be debunking rationalism. Schulte isn’t claiming to debunk anything, but what he actually is claiming to do is beyond me. The same goes for the specifics of Kooi’s installation, where the interplay of, for example, the transparent screen and video image on Kibbee Gallery’s famous stairs that lead nowhere produces a spectacle that is genuinely spectacular but elusive as to artist’s intent.

I think I am equally puzzled by the specifics of Nicole Akstein’s “Mother, Mae,” the other half of “Close.” Theoretically, I get that these photographs conceal or mystify as much as they reveal about Akstein’s actual mother. Her previous documentary work that documents events that are more staged performance than slice of life would lead me to conclude that. But I don’t know what the performances here are supposed to add up to, or even if they are supposed to add up. 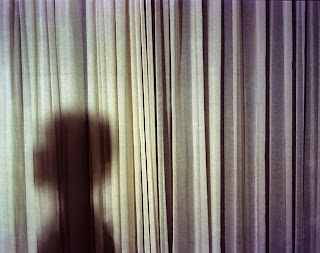 Thus I can hope that it is physically possible to get from Schulte’s artist’s talk on Saturday March 21 at 2 p.m. to Kooi and Akstein’s talks at 3 p.m. the same day. Whitespace and Kibbee are not that far apart, but.

P.S. —I am confident that the artists have left sufficient clues for sufficiently committed viewers to puzzle out far more than I have been able to. I count myself as a casual viewer, always, except when a work of art so stops me in my tracks that I could commit the rest of my life to understanding it. Which works of art those are will differ for each human being on earth, and not only because of their biology and social history; the accidents of individual biography count for much, as well.

Posted by littlejoke at 7:34 PM