One of the greater artworld injustices is the lack of attention paid to Nick Madden's "I'll Die High" at Atlanta's Eyedrum. A major reason for this may be the show's bizarre violation of categories: cartoonish kinetic sculpture is not supposed to be an appropriate vehicle for thoughtful consideration of death, especially the death of one parent by cancer and the inner death of the other parent via dementia. 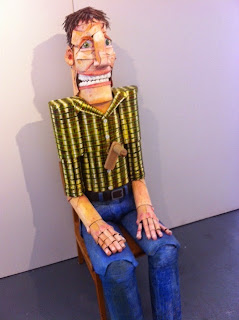 Waiting features a crank allowing viewers to make the figure's teeth chatter, a strange, excellent metaphor for the isolated nervousness of kin in hospital waiting rooms everywhere. The show continues in this vein, ending with a marquee-like sign reminding us that one day we will die. 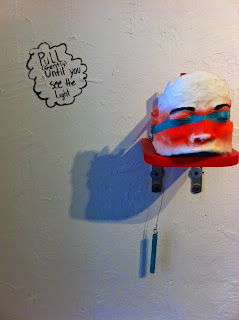 The meaning of this exhibition isn't entirely clear without the information provided by Eyedrum staff, and that may be its chief problem. Viewers have had no trouble making up stories about things like this figure about which we are invited to pull gently on the cord until we see the light (which does eventually appear, for the patient viewer).

There is only one day remaining in the exhibition as I write this, but a closing reception is scheduled for Friday evening, March 27.
Posted by littlejoke at 2:21 PM