On the Fantastic, and Other Endless Enigmas; another post written years ago, but never made public until today 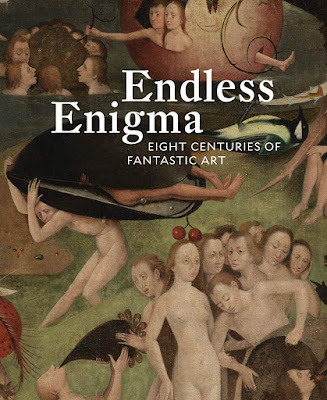 I am amused by the fact that now that nobody sends me review copies of anything, I find myself promoting more books at my own expense than I was ever able to when I had access to venues that published book reviews regularly.

I promise, not without cautionary footnotes to my promise, that I’ll pass along my opinion of this book once I read it. (It comes from David Zwirner Books, the catalogue for an exhibition that the gallery staged in the autumn of 2018.) One of the authors is Dawn Ades, whose Undercover Surrealism: Georges Bataille and Documents [“Documents” being the name of Bataille’s Surrealist magazine] is another one of those books gathering dust as it awaits a proper reading ten years after I bought it. The parts I have read have validated some of the things I was already doing.

One of my perennially postponed projects is a re-investigation of “the fantastic,” and its function across societies. Rationalists of the functionalist school have no difficulty with the fantastic as entertainment—people need impossible fantasies as an escape from the restricted world in which they really live, whether those impossible fantasies be tales told around a campfire in past or present times or CGI-assisted multiseason series suitable for eventual binge watching by people with access to the appropriate viewing media.

What these folk tales or tall tales gone wild have in common is that nobody takes them seriously, even if they choose to dress up like characters in the series. Such tales fulfill a different need from, say, romcoms or their print-media relatives, in which the stories of improbable romances include conventional tricks such as “meeting cute” that sometimes, once in several blue moons, happen in real life. Americans were charmed when a princess from Hollywood married the ruling prince of a real-life principality sixty or so years ago, back in the days when “Fairy tales can come true, it can happen to you” were song lyrics on prime time television. More recently they were delighted when another Hollywood personality found her charming prince, albeit one that is a bit more distant from assuming a throne. (This led to a couple of sick Game of Thrones jokes.)

Ernst Bloch wrote three thick and sometimes ponderous volumes (The Principle of Hope) trying to puzzle out the relationships between pure escape from reality and the possible futures that lay behind imaginary Lands of Cockaigne and, later, behind political revolution that made possible some ways of everyday living that previously had existed only in fairy tales. Given Bloch’s commitment to styles of politics that his fellow Marxists decided were beyond the pale, it would take considerable re-visioning to make The Principle of Hope worth taking up again, just as, in a completely different register, Joseph Campbell’s The Masks of God is no longer a viable guide to the meanings and functions of world mythology, even though Campbell did his best to incorporate everything that the human sciences and the so-called hard sciences had discovered about the human condition at the time he was writing.

Nevertheless, the problems remain that Bloch laid out in one language and Campbell laid out in another, diametrically opposed one. How and why people in all cultures expand the counterfactual into the openly impossible is worth contemplating, with slightly less highfalutin terminological obfuscation. “Wouldn’t it be nice” has been transmuted again and again into “Once upon a time,” but “they lived happily ever after” has not always been part of the equation. Stories that begin with “What if” are frequently another genre altogether.

One of the areas that interests me in particular is the point at which the acknowledged impossible blurs or shades into the only way to approach possible reality. Bloch can only cope with the political and social side of this, but the side that Jeff Kripal, Michael Pollan, and a host of others have been dealing with in recent decades is of equal interest. If narwhal horns were considered material proof of unicorns in past centuries (which leaves the origins and functions of the remainder of unicorn lore unexplained) and dinosaur fossils in time-weathered rock gave rise to tales of monsters of all sorts (which leaves the gory details of those tales likewise unaccounted for, beyond the love of humans for the pleasurable shudder of considering dreadful topics), are hallucinations likewise an adequate debunking explanation for all sorts of stories that lay claim to truth, or do our “explanations” exclude by arbitrary definition all sorts of so-called paranormal phenomena that seem—sometimes—to have some amount of cognitive value? (We might consider the unpleasant fact that even our most self-assured perceptions have only “some amount of cognitive value”—the difference being that we very rarely misinterpret sets of perceptions that we describe as, for example, “the glass broke because I knocked it off the counter,” even though every once in a while the glass fell to the floor for some other mundane reason that we didn’t notice.) Should the paranormal be redefined, not without deliberate jokery, as “the new normal,” or the normal that most of humankind has acknowledged all along, even if it was always interpreted wrongly? Should we be redrawing the boundaries of human existence differently, even though the prospect creates deep discomfort in skeptics and believers and genuinely puzzled inquirers alike?

But like I say, that’s one of those awful topics I’ll probably never get around to unpacking properly, or even evaluating how other people have been unpacking it. As my friends can testify, I tend to leave lots of stuff firmly packed.

A less consequential subtopic I’d like to explore but probably won’t is almost the opposite, why there are so many Facebook groups that can simply post images under the topic “Bizarre, Peculiar, Odd, and Strange,” or “Weird and Wonderful,” or “Spooky, Weird, and Cool,” and sure enough, despite some missteps and stupid mistakes of aesthetic taste, most of the images evoke a small shudder or surge of delight or charge of emotional energy of some more difficult description, in spite of their lack of anything resembling an accompanying story. I suspect it has something to do with the same triggering mechanisms that allow many people to respond with a surge of positive emotion when they see particularly adorable pictures of cats online, even when in real life they regard cats as destructive predators causing the extinction of endangered species.

Campbell has some, but only some, useful things to say about this in the early pages of The Masks of God: Primitive Mythology, in which just the outdated wording of the title serves as a warning of problems to come.

Posted by littlejoke at 4:09 AM