written long ago, but never posted, for reasons I no longer remember. 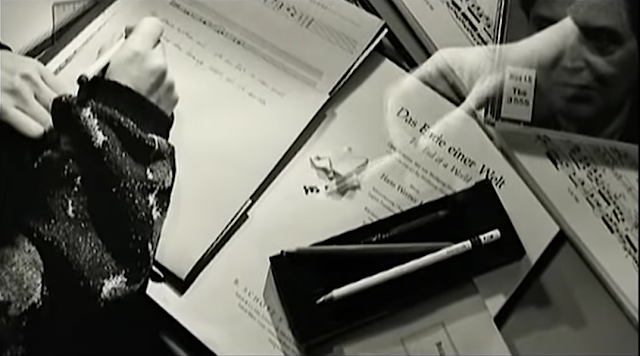 And now for something completely different....


When the world ends, it ends somewhat differently for each soul then alive to see it; the end doesn’t come all at once but passes and repasses over the world like the shivers that pass over a horse’s skin. … But though the world ends sooner for some than for others, each one who passes through it—or through whom it passes—will look back and know that he has moved from the old world to the new, where willy-nilly he will die: will know it even though all around him his neighbors are still living in the old world, amid its old comforts and fears. And that will be the proof, that in his fellows’ faces he can see that they have been left behind, can see in the way they look at him that he has crossed over alive. [John Crowley, Dæmonomania, Book Three of the Ægypt Cycle, © 2000]


— I have been struggling with how to define the end of a world ever since RIBOCA 1, the Riga International Biennial of Contemporary Art presented under the title “Everything Was Forever, Until It Was No More.” I quote the John Crowley passage above (and post as accompanying illustration “The End of a World” book title in a film still from Wings of Desire) because I have been pondering the subtitle of William K. Klingaman’s 1989 book 1919: The Year Our World Began. There are those who would say that his subtitle was wrong already by the end of the year his book was published, but that’s true only of Europe; I hold for those who favor 1979 for the start of the passage time, but the end of the passage time—well, that’s open to contestation up to this very moment. Yet it feels ever more evident that the world that began in 1919 and persisted, despite great changes, in 1989 is not the world in which we now live, even if some of this year’s anniversaries seem eerily familiar. (December 21, 1919 saw the culmination of the roundup for deportation of anarchist immigrants, when they were put on a chartered ship and sent off to Russia via a Nordic seaport with forcible transport across the border.)

One of the things that keep defeating me in my efforts at definition is the difference between fundamental transformations and transformations that have enormous, seemingly permanent effects that nonetheless turn out to be transitory. Cambodia has been put back together as a different but recognizably Cambodian society even though it has gone through several near-total upheavals in the past half-century, just as Western Europe was put back together after World War II as a set of sometimes dramatically different societies that were nevertheless related in some major ways to their prewar modes of being. In some ways, Europe and the United States are undergoing more fundamental, possibly lasting transformations at the moment than in any time in the previous century, and the world as a whole is undergoing more fundamental transformations, between the spread of the digital revolution and the consequences of climate change. More so than when Marshall McLuhan first proclaimed it, it seems that a change in media often creates a genuine change in consciousness and self-definition. Granted, a sufficiently drastic change in material circumstances would seem to do the same, although the other way round is equally demonstrable, as a shift in what is considered significant, and what is perceived consciously as a result, has dramatic consequences for forests, aquifers, and air quality, to name only three material systems.

But that's quite enough of that.

Posted by littlejoke at 4:04 AM