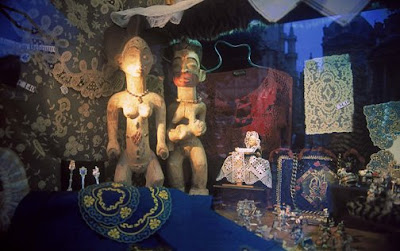 Reading through the various papers from a symposium called Visual Literacy that James Elkins edited for Routledge this year, I realized again just how much Lisa Tuttle’s “Belgian Diary” photographs at Atlanta’s Sandler Hudson Gallery depend, for full comprehension, on a degree of historical background along with a visual literacy that goes beyond formalist questions of the composition of a good photograph.

Of course, one could say much the same of William Boling’s images of objects sold on eBay, at Hagedorn Foundation Gallery through October 3, and perhaps of Tom Zarrilli’s photographs of anomalous juxtapositions in yard sales. But there, the formalist aspects and unexpectedly amusing ironies are usually the main point, plus the amount of psychological unveiling involved in the fact that the seller had chosen to possess the objects in question, and that our society had felt the need for them to exist.

That last-named species of revelation is also the point of Tuttle’s photographs of Belgian flea markets and shop windows, except that the psychological unveiling is one that involves a whole country and its colonial history.

As books like King Leopold’s Ghost reminded us some years ago, in the latter part of the nineteenth century H.R.H. Leopold, King of the Belgians, created the singularly misnamed Independent State of Congo as his personal fiefdom, not as a colony of the Belgian nation. The extraction of raw materials from the country depended on the uncompensated labor of the Independent State’s inhabitants.

When an observant bookkeeper in Belgium realized that tons of valuable commodities were coming out of Congo but nothing was going back except supplies for the colonial administration, he sounded the alarm. And in an act of appropriate outrage, the Belgian parliament removed Congo from Leopold’s jurisdiction and assumed control.

What followed was itself one of the less happy stories of colonial administration, and in 2005 what had once been the Belgian museum of the African colonies undertook to present the whole tale, unprettified and laid out analytically, with photographic documentation.

But the flea markets photographed by Tuttle are very nearly as good a record of the consequences of colonization as the museum’s show. Congolese sculptures, ranging from near-museum quality to tourist knickknacks, sit next to memorabilia of colonial days and sentimental reminders of the happy nineteenth century in the homeland.

The sheer quantity of Congo-related stuff is a reminder of the decades of Belgian colonial entanglements in Congo, Rwanda, and Burundi (which were then joined together as Ruanda-Urundi). And Tuttle has a keen eye for the absurdities and the telling juxtapositions, which come from a different history than the more benign or merely bizarre paradoxes and comic moments discerned in American pop culture by Boling and Zarrilli. (This is not to say that the moments can't be simultaneously odd and poignant; I once acquired a souvenir shot glass from prewar Sarajevo in an Atlanta yard sale.)

Tuttle’s show deserves formal analysis one image at a time, but this is enough for starters. If I get started on the topic of inadvertently revelatory documentary residues of the colonial past and present, I’ll write more about that than about the show at Sandler Hudson, which runs through October 18.
Posted by littlejoke at 8:35 AM