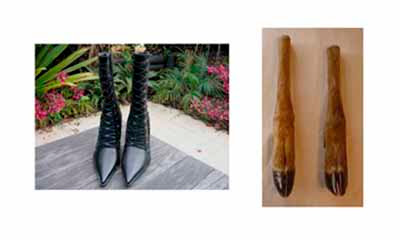 William Boling deserves a more comprehensive (and corrected) discussion than I could give him in the middle of a Lisa Tuttle discussion.

"You Ain't Wrong" at Hagedorn Foundation Gallery and online at www.youaintwrong.com is actually a comparison of online items offered for sale or auction in New Zealand and the United States, something which isn't immediately apparent on viewing the juxtaposed images.

This is, in part, because NZ and the US are so culturally congruent (even if NZ is still a bit more like the UK and is sometimes willing to let itself be called by the Maori name Aotearoa) that it requires a keen eye and an anthropological background to figure out the subtle psychological differences between the two junk cultures. If Boling is to be believed, the US wins out in terms of odd bits of taxidermy, and I for one can believe it.

But my original point remains: more often the pairings seem to be making formal points (usually humorous ones) rather than providing piercingly analytical insights into the nature of today's America versus a land in the South Pacific whose historical entanglements and ironies presumably make for some amazing bits of material culture, as they used to call it last time I checked into the academic discipline in question (which was just long enough ago that anyone using the term "material culture" is now probably ridiculed).

I used to be a great deal more current on NZ when Art New Zealand was available in Atlanta, and am now suddenly inclined to begin a Google search to see what has been going on in NZ culture lately. Presumably, as with American culture and eBay, I could also find out the same thing by searching the NZ auction site frequented by Boling, but I would already have to know what names and keywords to look for.
Posted by littlejoke at 8:30 AM