more news from the underreported countries 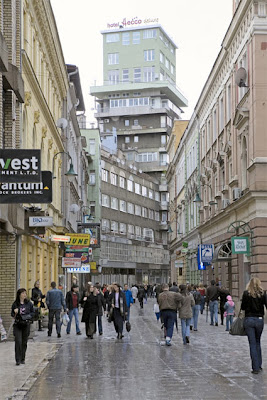 The above photo, labeled "Sarajevo 2008," is part of a current exhibition at the Swiss Architecture Museum in Basel (until December 28), for the information of those of you with travel budgets.

For the rest of us, the website reveals that the exhibition "BALKANOLOGY: New Architecture and Urban Phenomena in South Eastern Europe" covers a considerable range of contemporary architecture in five cities (Belgrade, Zagreb, Kotor, Prishtina and Tirana) in the countries traditionally identified as "the Balkans." However, the show's theory-based focus is "urban development in transitional and post-conflict situations, from Prishtina to Belgrade, where weak or missing institutional structures make it impossible to achieve the regulation of construction processes. The wild, volatile spread of informal building structures is the aftermath of the kind of urban crisis that follows social upheavals or wars. At the same time, independently of regional particularities, these urban developments display a new kind of urban form that is quite different from informal settlements in countries outside Europe."

In other words, the versions of uncontrolled urban development in the Balkans are both prototypical and distinct, which is the kind of situation I love to contemplate.

But I am not going there, so until I can figure out the most efficient way to acquire the twelve-euro catalogue, this summary will have to suffice: http://www.we-make-money-not-art.com/archives/2008/11/balkanology-new-architecture-a.php
Posted by littlejoke at 7:58 AM