what is to be done? the future of...the future, I suppose 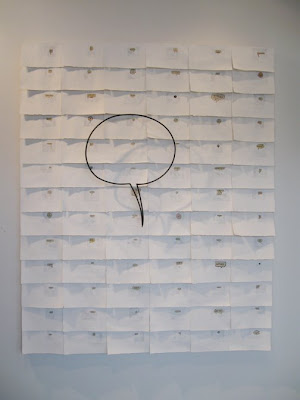 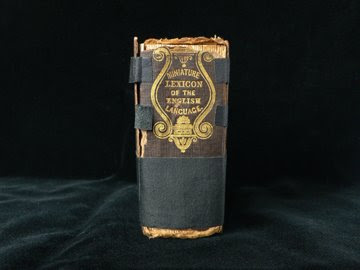 The fact that both Pat Courtney and Greely Myatt deal with issues of print, discourse, and communication (Myatt's assemblages of speech balloons being particularly dependent on seeing the thing at full scale, while Courtney's photos are addressing issues of scale in a different way) makes their work the perfect segue to my question.

Who will be the Aldus Manutius of the digital generation?

I refer you to the following (to the URL, not the lovely photo of a book that might make us think of Manutius):

Now, I was clued into Manutius long ago from my days setting vintage movable type and from reading around in the commentaries on Ezra Pound's Cantos. Manutius invented the octavo format and italic type. (And truth be told, I probably encountered his name first of all back in high school from some explanation by Doubleday of why their Anchor Books paperbacks used the dolphin-and-anchor symbol, Manutius' emblem of the slogan "festina lente," or make haste slowly.)

What difference did that make? Eisenstein's point is that the octavo format made books suddenly the portable things they had been back in the days of the Roman Empire's hand-copied volumes (I don't know that she says that, but they were). As long as printing presses were set up only to accept page sizes suitable for monastic libraries or Protestant pulpits but not for the casual reader, the full impact of the invention of movable type was limited by the format of the existing technology. A new technological paradigm releases a whole host of previously unavailable social options.

The problem is that it takes time and imagination to get from one format to the other, especially when the format in question is a whole social world of expectations and monetary exchange. And in the time between, a whole host of possible options come and go, and a few of them stick, or provide the framework within which somebody else makes a similar option stick.

And this is why this post is really about the condition of art reviewing in Atlanta and other American cities in which newspapers have been unable to adapt to rapidly changing social expectations and conditions of monetary exchange.

We (and I think I mean "we" in terms of a fair number of cities, probably not only in the U.S. of A.) are making do the way that Eisenstein tells us, via Shirky, that folks did in the transition into the Age of the Printing Press: awkwardly, and with a lot of options that will turn out to be dead ends.

The huge problem right now is that print media have been hit by a perfect storm (which, with my fondness for Freudian typographical errors, I first typed as "story").

Newspapers were suffering from the wholesale transition of classified ads to craigslist and others, and commercial and corporate ads to websites, just not the newspapers' websites. (The poor old print media never quite got the hang of making their websites as easy to navigate as their newspapers. And ads were the whole point: when you buy a newspaper, you are paying for the cost of the newsprint and ink and the delivery, not for anybody's salaries or company profits.)

Then came September 15 (as I now refer to the 2008 collapse of Lehman Brothers), and 9/15 was the print media's 9/11: just as a good many unrelated business enterprises went out of business following the attack on the Twin Towers because nobody was buying anything (leading to our then-President's admonition to go out and buy stuff so the terrorists wouldn't win), a good many unrelated business enterprises have been going out of business because even the folks who can afford to buy stuff are feeling disinclined to do so. That stuff includes print advertising.

So now we have a huge number of cultural activities formerly publicized in print and in online calendars that are now being publicized in a host of small online venues, each of which individually is read by a relatively minuscule fraction of the potential art audience. And the quirks and irritating oddities of the various venues ensure that the entire art audience will not read any single source of information.

And only the truly devoted read all of them, or even most of them. So there are not merely cracks for things to fall through, there are chasms.

Things will sort themselves out in the long run, and today's unpaid content providers will find niches beyond their current categories (though the financial reward for providing content was little enough in the heyday of print, it was more than zero, whereas the financial reward of content-providing as a sparetime activity in the heyday of buy-your-own-laptop -and-your-own-gasoline is less than zero).

But as John Maynard Keynes famously pointed out, in the long run we are all dead.

It is good that we have a plethora of overlapping sources that more or less cover most of the bases in a game with less than a full team of players. But how long this can go on until some of the players take their bats and go home is anybody's guess.

Looking at stuff is still part of my job description for now, when there is nothing else requiring my attention such as looking for misspelled names and other factual errors in other people's print copies. So I shall stick it out, and my hope is that the others with day jobs will continue to do so.

But as I have asked many times now, what is to be done?
Posted by littlejoke at 10:17 AM

Just wanted to share some information that I came across in a few articles discussing about recession and how we can adopt a different marketing strategy to promote our business. It’s quite eminent that most of the advertisers and businesses are taking to online advertising medium since the Internet has now become a necessity to reach global audience. However, even today there is still a huge chunk of people who do not access Internet and to reach this segment of the society; we can rely on the print media. This in fact would be a great choice for anyone whether they are looking out for global, national or local exposure.

Since the economies are now at the bring of recession, it’s a good idea to consider print media as well in the marketing mix so that you can extend your reach further to get additional traffic to your website or business. You can try a blend of online and print advertising through a reputed ad agency that can help you professionally.

Sorry, but if you read carefully you will see that that is the problem. If people were spending money on print media, we would not have a problem. But there is no money and they are not doing it, and therefore there are no ADEQUATE print-media outlets within which to reach the audiences desired, because the audiences desired have given up on finding the information they need in the print media.

Nobody has enough cash flow to even have a "marketing mix." You obviously live in a differently developed part of the global art market.

and btw, it was obvious that this was an automated keyword-search reply...the sophistication of dumb-machine blogspam always astounds me, so close and yet so far away. so just as one likes to cuss out a recorded message before hanging up, I felt the need to vent for my live readership.

This one looks to be Asian in origin, which is quite curious.

Need To Boost Your ClickBank Banner Traffic And Commissions?