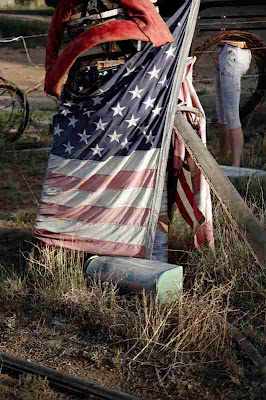 An exhibition currently at Atlanta Photography Group's gallery in the TULA art center documents the final days of Tiny Town, a folk art environment in New Mexico that was bulldozed in relatively recent days, photographer Don Bryant informs us. (He photographed the site almost exactly a year ago; the site was destroyed in January.)

Wondering how much the site had been documented otherwise and why some site-preservationist group like Intuit hadn't been asked to intervene, I looked up the place online and discovered that, as with so much folk or outsider art, the whole story is impossibly ambiguous and the reports preceding Bryant's are contradictory.

Here is one website's description: "Earlier reports by travel writers describe this acre as having its own saloon, church, courthouse and jail; rivers made of broken glass, and roads made of tarpaper, complete with yellow lines. However, when Legends of America visited, there was little sign of the acre of haphazard material resembling a town. Perhaps this is because several years ago an art scout came upon Lange’s town and arranged to have much of it boxed and shipped to the Visionary Art Museum in Baltimore. Evidently, this was the jumping board for success, as the artist now sells many of her creations in local shops." http://www.legendsofamerica.com/NM-Quirky.html#Tiny%20Town%20-%20Art%20That%20Dies%20to%20Live

And here is another, http://www.santafenewmexican.com/Region/17-TINY-TOWN :
"The term "outsider art" does not begin to describe what's on display at Tiny Town. Even so, the roadside attraction just north of Madrid just isn't what it used to be. Wind, weather, sun and the passing of time have turned the one-time sea of broken glass and artfully arranged bones into ramshackle, dilapidated outdoor display.

"Artist Tammy Jean Lange has been called a visionary and a 'human firecracker' as well as a local icon in so-called outsider art, using roadkill, rusted objects and broken toys as her media. A discarded cigarette machine, rust-red iron cookstove, set of putt-put clubs and dozens of partially clothed dolls are among the current occupants.

"Lange does not pay rent to use the 1 acre site, and over the last four years has done less and less to keep the place looking like the small wonder that it used to be, said longtime benefactor Bille Russell.

"Russell has for more than a decade allowed Lange to set up her found art on about an acre of her 112-acre Lodestar Ranch. When Lange, 49, also known as Tatt2 Tammy, started using the area as her primary residence and drifted away from what Russell called 'brilliant things,' Russell said she reluctantly took steps to change the situation.

"'I think her art has a right to exist,' said Russell, who met Lange when a friend helped get her art into the Mineshaft Tavern gift shop. 'So the initial deal was that Tiny Town could be there and she could work there, but she could not live there.'

"Russell said she was worn down by neighboring landowners who called the project an eyesore and wanted it cleaned up. 'It had its peaks, but in four years it's taken quite a dive,' she said. 'It became more like a dump instead of her working her art.'"

Bryant informs us that the site was finally destroyed, but the overall story turns out to be impossibly complex.

And this is the case with most folk art environments in this day and time, the seemingly downhome marker of rural authenticity shading off into postmodern tangles of narrative and motivation in which not only is one person's trash another person's treasure, but one person's folk environment is another person's leftover from better days in the folk art world, with the masterworks already hauled off for a museum. (Howard Finster's Paradise Garden would be worth preserving for the World Folk Art Church alone. St. EOM's Pasaquan is certainly in need of continuing preservation. Lonnie Holley reconstructed his environment after the original was bulldozed to make room for an airport expansion, but in the case of less robustly architectural environments than Finster's or St. EOM's, the issue will always be for how long the whole will be more than the sum of its parts.)
Posted by littlejoke at 7:58 AM

Don Bryant's images are definitely worth a trip down to APG to view, as is the whole show!

The entire space's exhibitions are worthy of a visit...I just haven't been able to write about the "In your Dreams" exhibition, which is unfortunate. One more weekend.