High time for the masterpieces 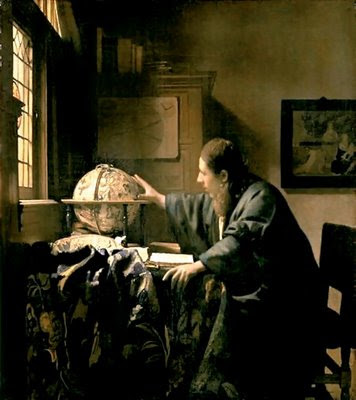 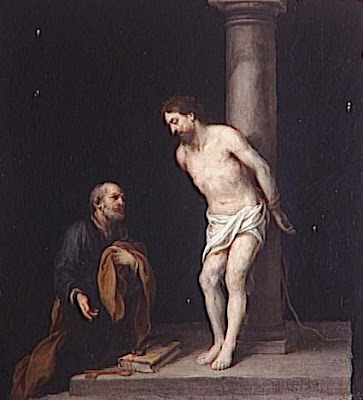 There is little enough time left to see "The Louvre and the Masterpiece" at the High Museum of Art unimpeded, before the dreaded Terra Cotta Warriors arrive and swamp us all in a sea of cultural tourism as their intrinsic mass appeal is coupled with the Carlos Museum's traveling objects from the tomb of King Tut.

Alongside such well-known astonishing artworks as the Vermeer illustrated here, the High's exhibition contains any number of less famous but genuinely amazing objects that justify the wearisome term "masterpiece"...even if there are those who would prefer some less-polluted circumlocution such as "really, really, really, really good stuff."

The Murillo painting shown here is one such aesthetic surprise, as much for its support as for its style.

Murillo used an Aztec divination mirror to provide the effect of the absolutely dark night in which Christ is about to be scourged by the soldiers. The obsidian gave him a desirable tone of black, and never mind the expected conventions of panel painting. Once the uses of Aztec obsidian were understood, a new subgenre of Spanish art was born. (Actually, there has to be an extensive and significant history behind the origins of that subgenre, and it was my webquest for that history that led to the digression that follows....)

A little bit of Google research turns up a contemporary show by Pedro Lasch (which is also a contemporaneous one, for Lasch's installation is at the Nasher Museum in Durham, NC until January 18, 2009) that makes use of the history of black mirrors for a work of installation art in which the metaphor of the black mirror is used as a tool for contemplating both the legacy of the indigenous art of the ancient Americas and contemporary philosophical and political concerns. (Lasch's conceptual ambition justifies a descriptive sentence as long as some of Joe Biden's speeches.)

Lasch provides considerable background on the uses and associations of the Aztec obsidian mirrors: "The Aztecs directly associated obsidian with Tezcatlipoca, the deadly god of war, sorcery and sexual transgression. Threatened by similar associations with sorcery and deviance, Pope John XXII banned the use of mirrors for any religious purpose in 1318. Yet centuries later, obsidian plates of all shapes and sizes would be introduced into Christian altars across Spain and its colonies, eventually becoming the surface on which artists, including Spanish baroque master Bartolomé Esteban Murillo, would paint saints and virgins."

Murillo's mirror transformed for devotional purposes stands on its own as a significant historical and aesthetic artifact, especially in the diverse company it keeps at the High, where, paradoxically, the diversity of astonishing objects encourages the independent contemplation of each object's virtues, and of the historical context within which an object of such excellent complexity was created. (The show also features a few adroit juxtapositions of good-but-not-great examples of a genre next to the really, really, really, really good piece, to encourage us to think about what justifies that string of "really"s to describe the...okay, I'll use the word...masterpiece. There is also a singularly educative situation in which a subpar work by a big name is outshone by a piece by one of his imitators.)

As installed in dramatic isolation at the High, the archaic Greek sculpture known as the Lady of Auxerre seems so self-evidently superb that it is difficult to re-imagine how it could have been used as an incidental hatrack in the town museum where a curator from the Louvre discovered it a century ago. But this cluttered photograph from another context makes clear how stunningly elegant objects can look like nothing much at all when viewed from a bad angle and surrounded by competing visual stimuli: 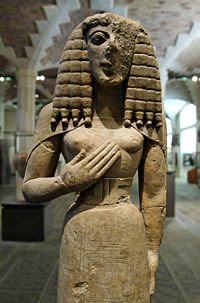 At the High, this sculpture gets the respected viewing situation it deserves. And that helps, a lot, in terms of really seeing what is already there. This is one case where putting something literally on a pedestal encourages insightful viewing rather than unreflective reverence.

The whole show is an exercise in learning to look. And that makes it a more than suitable conclusion to this three-year succession of exhibitions. This one is worthy of repeated viewings, which the arrival of The First Emperor's sculptural retinue in mid-November will render very difficult.

So get out there and look while this is the only blockbuster show drawing the crowds.
Posted by littlejoke at 7:59 AM

I just read The Girl With The Pearl Earring today, as I needed a pulp novel, and though I've never before encountered the Vermeer you posted, I immediately recognised it as his from her vivid descriptions of his use of light & colour.