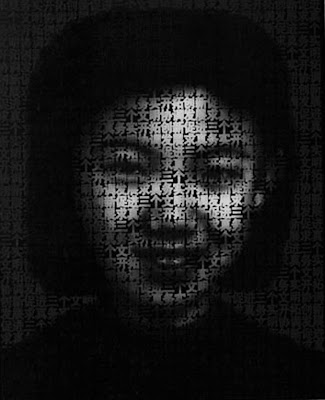 An interview with Zhang Dali in, I think, the September issue of Artvoices clarified greatly the sources of the "Slogans" series now at Kiang Gallery. It is important to know how he acquires these generic identity photos in flea markets and overlays repeated versions of the helpful slogans posted by the Chinese government for popular consumption.

Slogans on banners or posters have been a part of Chinese life for a long time, but the content of these cheerful, snappy (in the original) pieces of self-help propaganda is quite distinct. It is also, for people like Zhang Dali (who, before recent events devalued the word, we might once have called "mavericks"), annoyingly condescending.

Hence the overlay of slogan overburden on generic faces of "the people."

This is more conceptually opaque than the artist's earlier work, even after someone tells us about the current ubiquity of this particular genre of slogan (which visitors to the Beijing Olympics saw in profusion).

Even for viewers of a certain age, it is difficult to appreciate the exact nuance here. Some of us grew up before the disappearance of the annoyingly universal public service ads telling us to break all matches before discarding, because only we can prevent forest fires. They made city dwellers who never went near a national forest feel like becoming pyromaniacs on general principle.

But for Chinese of the generation after the declaration of "To get rich is glorious," the admonitions of the nanny state almost certainly have a different resonance. This is especially likely since Zhang Dali's work has been so comprehensively a commentary on the difference between the old China and the new...the old being the country that used to describe itself as New China before the arrival of the new and improved product under the same management.

And it was new, before, as is the way of history, it became something different.

And Zhang Dali has explored its mores in terms of altered photography pre-Photoshop: 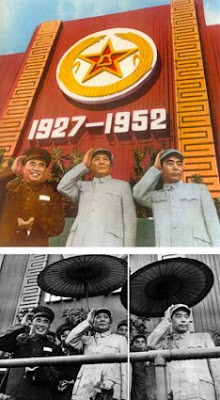 How reality is prettified or obscured in photographs is one of his particular interests. How language is poured over individual lives for well-meaning but overwhelming purposes is presumably another.

But we are left, or I am, with the feeling that his work requires the presence of wall text (beyond simple translation), or explication by someone on the premises. The innocent eye, or the untrained American eye, anyway, simply cannot contextualize the work in terms of what appears obvious to sophisticated observers onsite in the home country.

And this is typically the case with all but the most blatant of global conceptual art, even the works that appear to be dealing with universal issues. The universal is always presented in particular inflections, even as it reminds us of that which makes the human species an ultimate unity.
Posted by littlejoke at 8:56 AM

at least something like this is easier to contextualize:

So was the transformation of Soviet era posters into Coca-Cola advertising, by a Russian artist whose name I no longer remember.

But actually, there are a lot of Atlantans who would recognize Chairman Mao (maybe) but ask why the cadres were looking at a piece of bathroom equipment. "Uh, is this, like, a joke on Communism going down the toilet?" is the remark I can imagine certain people making.

We forget how little the world in general knows about things we consider commonplace. But I love the image and am extremely happy you posted this.

"We forget how little the world in general knows about things we consider commonplace.

you got that right!

sometimes i can call myself a poet & the poetry-world is an even more unknown realm to most folks than is the art-world, try talking about how "flarf undermined the academic canon via populist avant-gardism" & watch people flee like villagers from Frankenstein!

oh, i could say " FrankenGstein ", most people know Gertrude Stein don't they?

there was another photo inwhich depicted a Chinese artist who'd emblazoned the Coca-Cola logo across an antique vase of some-important-dynasty-of-which-i-forget, but i liked the ballsiness of the gesture & i'm sure it pissed off some of the more purist antiquity fetishists!

The ArtVoices in question came out right after I wrote my "review" over on GM. I've had a chance to revise myself (hopefully at least in terms of logical construction) in a review that, sadly, comes out next month's issue.

This was good, Jerry. Really.

eToro is the ultimate forex broker for novice and pro traders.